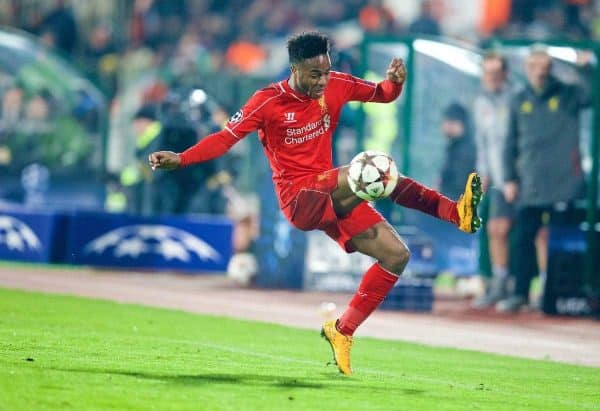 After Liverpool’s 2-2 draw away to PFC Ludogorets Razgrad on Wednesday, Jack Lusby selects his best and worst performers from the night.

Brendan Rodgers has come under consistent pressure recently as his Liverpool side has struggled to find anything resembling form, and a win away to Champions League opponents PFC Ludogorets Razgrad was a must.

However, Georgi Terziev clearly hadn’t read the script as his late equalising header kept the Bulgarian side in with a chance of qualification.

This was after Dani Abalo’s early goal was cancelled out by a comedy goal from Rickie Lambert, on his first start in the Champions League, and a fine strike by Jordan Henderson.

Ludogorets remain level with the Reds on four points, behind both FC Basel and Real Madrid in Group B.

It was a better performance than that mustered up away to Crystal Palace in the Premier League on Sunday, but miles away from the magnificent attacking side of 2013/14 under Rodgers.

But who played well for Liverpool in Sofia, and who underperformed?

A good game for Raheem Sterling

19-year-old Sterling has been underwhelming in recent performances for the Reds, either due to fatigue, being deployed out of his best position or an accumulation of poor form all-round.

However, the England international was back to his best in flashes against Ludogorets, and it was his direct running style that troubled the Bulgarian side the most throughout.

After some fine interplay between him and Lambert on the left-hand side of the pitch, Sterling’s inch-perfect cross allowed Henderson a simple finish at the far post to make the score 2-1.

However, perhaps identifying the fragile state of the forward at the moment, Sterling was replaced on 82 minutes.

Nevertheless, a shining performance from the Liverpool man.

A bad game for Simon Mignolet

Belgian goalkeeper Mignolet was the subject of some bizarre criticism from former Reds goalkeeper Bruce Grobbelaar on Wednesday.

The 57-year-old told BBC Sport that “I’ve likened Mignolet to worse than Dracula because at least Dracula comes out of his coffin now and then. He seems to stay on his line and that’s it.”

Grobbelaar continued that “I would give Brad Jones a chance to see if he can come to the party and put Mignolet on the bench.”

While an interesting comparison, to say the least, Grobbelaar touches on a lack of confidence in Mignolet that was on show once more against Ludogorets.

Since the start of last season, Simon Mignolet has made 7 defensive errors leading to a goal in the EPL and UCL. #LFC pic.twitter.com/AkkMGtAmIu

His spilled attempt at a save allowed Abalo the simplest of finishes on two minutes, and Mignolet looked shaky from then on.

Dejan Lovren was, ostensibly, dropped on Wednesday night due to his poor form. Now is the time to offer Mignolet the same respite.

A good game for Jordan Henderson

Henderson, like Sterling, has looked out-of-sorts of late in a Liverpool shirt, and has rightfully warranted a rest in order to recuperate his trademark fervour.

With Steven Gerrard deployed in a more advanced role on Wednesday night, it was Henderson’s duty in tandem with Lucas Leiva and Joe Allen to provide both defensive pressing and support from midfield.

Henderson was particularly impressive in this role, as his run from deep to get on the end of Sterling’s cross outlined.

Furthermore, the vice-captain showed some impressive leadership in organising his teammates in both midfield and during defensive phases—although his post-match positivity was perhaps a little too diplomatic.

A good game for Rickie Lambert

After netting in his second Premier League start for Liverpool after just two minutes at Selhurst Park, Lambert was on hand early on once more to make things equal against Ludogorets.

It wasn’t the most graceful of finishes, with some poor defensive work from Cosmin Moti leading to a simple headed effort from the England striker, but Lambert’s goal gave Liverpool some belief after being deflated early on by Mignolet’s error.

Balotelli has yet to convert a big chance in the CL or PL for Liverpool; Lambert has bagged two in four days.

However, the real praise for Lambert’s performance should come from the striker’s technical play, and Rodgers may have found the right striker to deputise for the absent Daniel Sturridge.

Lambert serves as a target for Liverpool’s pacier attacking talents to utilise, and could be Rodgers’ ‘plan B’.

His partnership with Gerrard as the No. 10 affected late on, however, as both old hands tired.

A bad game for Brendan Rodgers

Once more, the Liverpool manager proved his unwillingness to adapt in light of some glaring deficiencies within his side with a bizarre managerial performance on Wednesday night.

After the loss away to Palace, Rodgers told reporters that “it is something I need to take full responsibility for,” suggesting he had soaked up these poor decisions and would react.

However, his initial team selection, and decisions during the game went against this claim.

Deploying Gerrard in the No. 10 role despite the captain clearly tiring early on at Selhurst Park at the weekend, and in dire need of a rest, underlines this succinctly.

Later in the game, after Ludogorets had made three, energetic substitutions, Rodgers made just one change, introduction left-back Alberto Moreno in place of Sterling; Gerrard and fellow fatigued veterans Lambert and Lucas remained on the pitch.

I think we can now conclude that there was never a plan to rotate Gerrard this season. The plan was 3 games a week, every week. At 34.

Unable to press the Bulgarian side high at 2-1 up, the Reds sat deep and allowed Ludogorets to force their way in to the 18-yard-box to equalise.

After the game, Rodgers attested that Liverpool “showed wonderful resilience and kept our focus.” Far from it though, Brendan.

Who were your best and worst performers for Liverpool against Ludogorets? Let us know in the comments below.