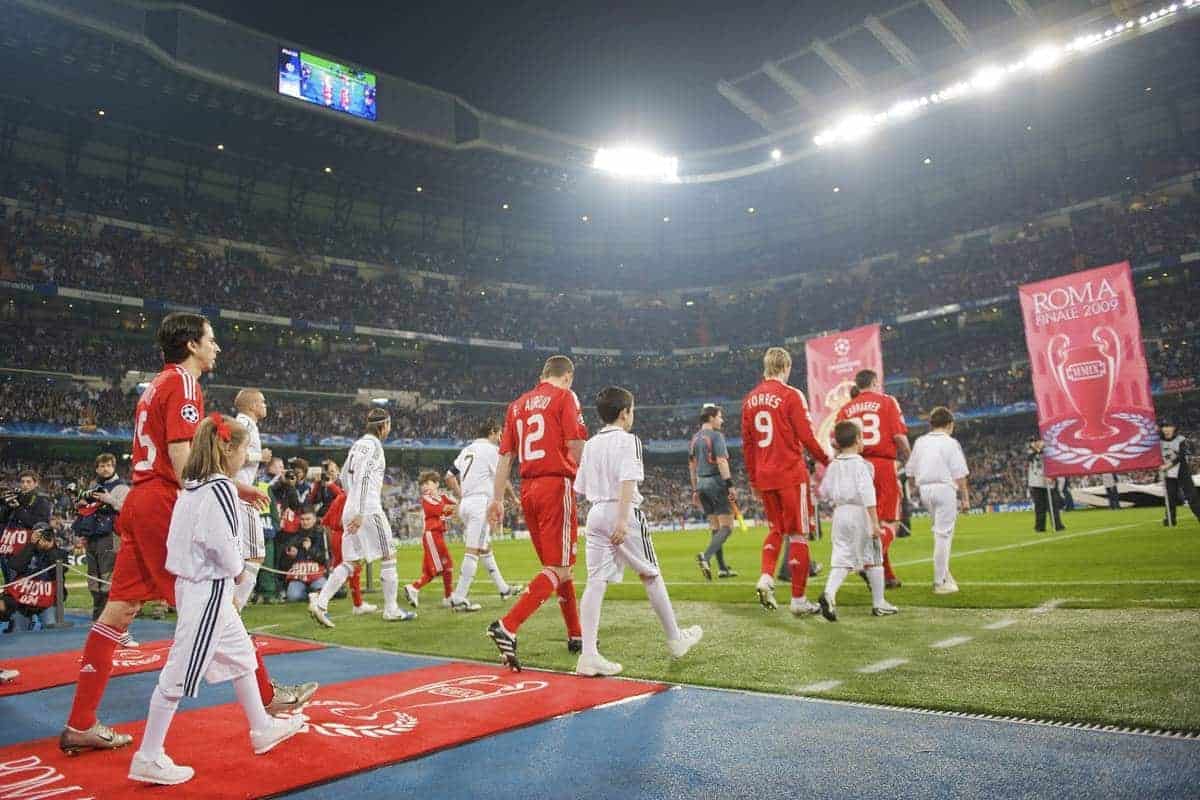 Liverpool face a second glamour tie against Real Madrid in the historic Bernabeu Stadium on Tuesday night in as tough a fixture as they come. Ben Twelves looks ahead to the clash. After slumping to a miserable 1-0 defeat against Newcastle United on Saturday, a tough period for Liverpool reaches its climax on Tuesday night, as Brendan Rodgers and his struggling team head to Madrid to take on the Champions League holders in the toughest fixture the Reds have faced in years.

Rodgers and his side will have a better idea of what to expect from the exceptionally talented home team this time around however – having been on the receiving end of a 3-0 defeat and footballing lesson from Carlo Ancelotti’s side at Anfield almost two weeks ago – but this time, the fixture presents a different challenge to the Reds.

Rodgers: "We see this as a great opportunity rather than a threat to what we're doing."

Liverpool currently occupy third place in the group –  level on points with fellow qualification hopefuls, Basel and Ludogorets – and even though Rodgers and his squad will be focussing on keeping the score-line respectable in in Madrid, they know full well that it remains firmly in their own hands regardless of the result on Tuesday.

There is no better place for the Reds to attempt to produce a performance on the biggest stage and search for a display that in turn should ooze confidence throughout the squad, and should the unlikely outcome be a positive one as a result of a brave display, it could be a season changer for Liverpool ahead of hosting Jose Mourinho’s title favourites at Anfield on Saturday.

Rodgers’ side will have to look back to February 2009 – the last time Liverpool visited the Bernabeu Stadium for inspiration – a game in which Yossi Benayoun’s powerful 82nd minute header was enough for Rafa Benitez’s side to record a famous 1-0 win.

Brendan Rodgers has confirmed that he has taken his whole squad on the trip to the Spanish capital, at a time when pictures of Daniel Sturridge on the aeroplane carrying the Liverpool team emerged to great anticipation, but he’s unlikely to be included in the match-day squad for the game.

Rodgers confirms it's "highly unlikely" Sturridge will be fit to play tomorrow. All the squad, such as Suso, have traveled.

Although the England international edges closer to match action, Mamadou Sakho, Jon Flanagan, Jose Enrique and Suso are all still injured and unavailable for the clash meaning the Liverpool manager is restricted in being able to alter his dysfunctional defence.

However, Rodgers is full of options in midfield for the game with all players available – including Joe Allen who was on the receiving end of a nasty challenge from Moussa Sissoko against Newcastle at the weekend – giving the Reds boss choices to make over his selection.

Sturridge’s presence will be a huge lift to the squad, but his continued absence for the time being at least means Mario Balotelli remains the first choice option to start up front, unless Rodgers chooses to change his teams’ set-up and begin the game in the system that ended the previous meeting with Raheem Sterling in the false 9 position.

The current European champions are on a run of 11 straight wins and they’ll be looking to replicate their 3-0 win at Anfield close to two weeks ago, with a victory on Tuesday night qualifying them for the next stage of the competition.

As a result of their fine form – which saw them win 4-0 at Granada last time out – Carlo Ancelotti’s dream team sit top of their domestic league as well as Group B, having scored 47 goals combined over the two competitions in just 13 games – with Cristiano Ronaldo registering four more league goals himself than the Reds have managed in total with 17. Rodgers’ side will be hoping to become just the second team to win at the Bernabeu this season – with only city rivals Atletico leaving with anything to show for their visit – but Madrid head into the clash boosted by the return of world record signing, Gareth Bale, who Ancelotti has confirmed is fit and named in the squad to play having missed the tie at Anfield.

Ancelotti says Bale fit and ready to face Liverpool. Will decide tomorrow whether to start him #realmadrid #LFC

Sergio Ramos, who also missed the match on Merseyside, could also feature after overcoming injury and playing in the weekend win over Granada. However, the Spanish giants could be without World Cup winner, Sami Khedira, and Asier Illarramendi – both didn’t train with the team ahead of the clash.

Sami Khedira & Asier Illarramendi did not train with the team at Valdebebas this morning. Makes them doubts for tomorrow's game. #realmadrid

Their potential absences add to that of Fabio Coentrao, Jese and Dani Carvajal, who is the latest injury concern after limping off early at the weekend with a knee problem, and his unavailability could hand another start to former Red Alvaro Arbeloa.

The match is will be shown live on ITV1, with kick off in Madrid coming at the traditional Champions League time of 19:45.