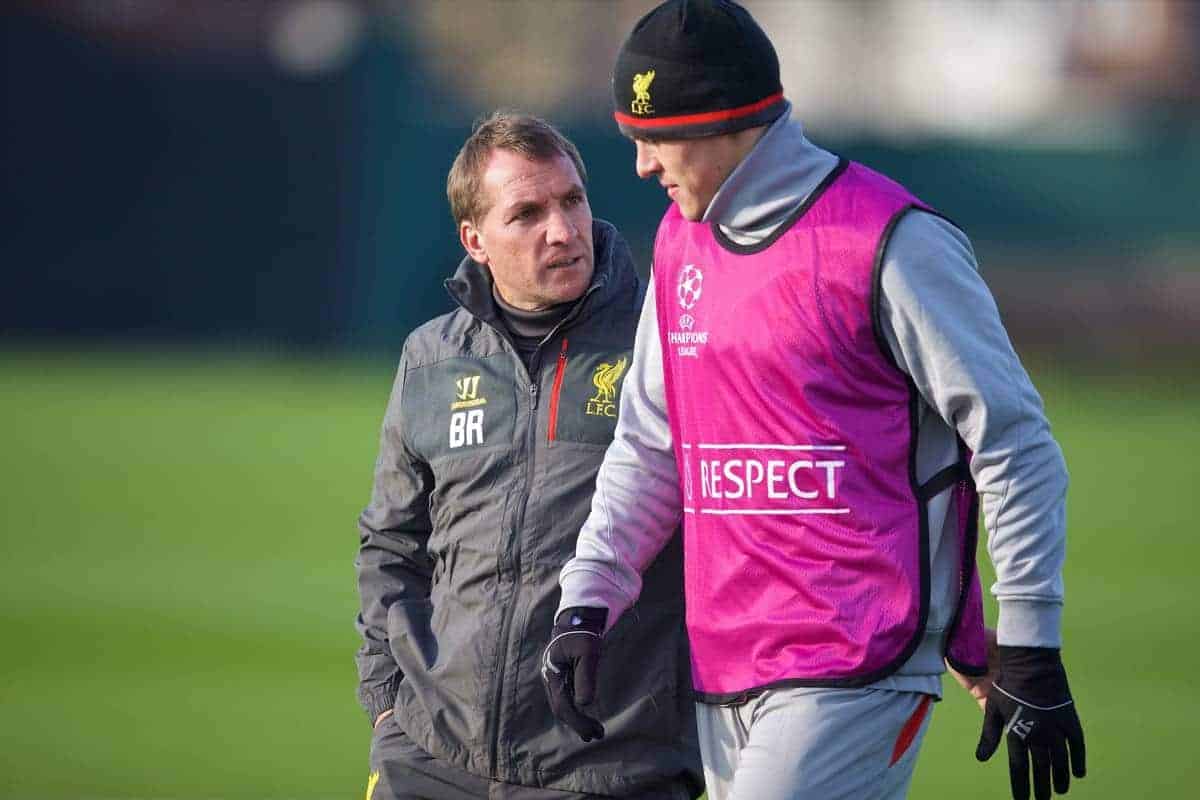 “I’m not arrogant enough to think that I will be in a job through anything.”

A season is at stake, a job is at stake and only 13 games on from almost achieving the unthinkable.
The elusive Premier League title became just that – but it propelled expectation, and an air of optimism was renewed. Six league defeats from 12 and four straight losses at this stage of the new season would have seemed, well, unthinkable.

Let’s get this straight. We all bought in to Brendan Rodgers and his brand of high octane attacking football, even at the detriment and disregard of actual defending. The opposition was beaten in the tunnel, before they touched the turf. But that was last year; our defensive deficiencies are no longer masked by a mantra of ‘we’ll score more than you’. It will not be replicated either, so let’s stop trying to and get back to basics.

What’s gone wrong? Let’s get it out of the way – we all know who we lost. His name hangs over us, mentioned by every broadcaster and ex player – even Brendan seems inclined to do so at any opportunity. Forget him; his brilliance is with Barca now.

The injury woes of Daniel Sturridge are unfortunate but not unexpected. From dining with fine wine in SAS, we’re now relegated to drinking Lambrini in, well, Lambert and Borini. Many will point to our signings; I’d point to our transfer strategy. Too many players brought in for the future when we needed players for the now. Easy to say in hindsight of course, especially when those expected to make an immediate impact have failed to do so and in such calamitous fashion – here’s looking at you Dejan Lovren.

And based on our failings, my want for new signings come January is non-existent. Pay to recall a wildcard 19-year-old Origi and pile pressure on his shoulders? No thanks.

On the pitch bares no resemblance to the dazzling displays of last year. No tempo or intensity, no speed in transition and a lack of creativity not helped by little or no movement in attack.
We’re tentative in possession and bereft of ideas. And that’s just going forward; our defending is a car crash.

Most alarming is that despite the performance or lack of at Palace, Lovren, Martin Skrtel and Steven Gerrard will start vs Stoke next Saturday regardless.

Gerrard can argue he’s a quarterback without a receiver and I sympathise, but in his primary role as a much needed screen for a hapless defence he is a passenger. This is just one big decision that has to be made by Brendan. It’ll be big decisions that will save his job, after all.

It’s time to accept the failings of a team in disarray and look for change. Change things in the Champions League on Wednesday, but don’t revert back come Saturday.

Bad results don’t make bad managers overnight; see Jurgen Klopp for case in point. Rodgers deserves time – we are not out of the Champions League, we are somehow only five points off fourth – and yes I am the eternal optimist.

If FSG were to go looking for a new manager, they’d be after another Brendan Rodgers. And we’ve already got him here.

So back yourself, Brendan. Be bold, make the decisions, upset people and take the blame if they don’t work out. Become more than just one season of overachievement. Don’t allow two years of progress to dwindle to mediocrity, because we all bought in. Here’s hoping at the end of this storm, there’s a golden sky for Rodgers.