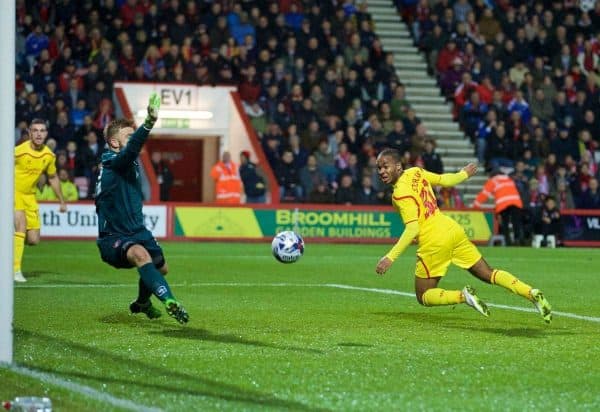 Liverpool defeated Bournemouth 3-1 at Dean Court, as two goals from Raheem Sterling and Lazar Markovic‘s first goal for the club saw the Reds go through to the semi-finals of the Capital One Cup. Liverpool were looking for a place in the semi-finals of the League Cup, with Eddie Howe’s Championship table-toppers Bournemouth standing in their way at The Goldsands Stadium.

Brendan Rodgers made three changes to the side that lost 3-0 at Manchester United on Sunday, with Kolo Toure replacing the injured Glen Johnson, Lucas Leiva coming in for Joe Allen and Lazar Markovic being recalled in favour of Alberto Moreno.

Rodgers went with three at the back, with Markovic and Henderson as wing-backs and Raheem Sterling up front again. The 20-year-old’s finishing was sure to be under the microscope after his poor showing at Old Trafford.

Bournemouth‘s top scorer Callum Wilson had an unbelievable chance to give the hosts the lead after just two minutes, but dragged his effort wide.

Adam Lallana then forced Artur Boruc into a superb save from range, and Steven Gerrard’s goal-bound shot was blocked. It was an excellent start to the game.

The Reds showed their class early on, dominating possession, but the Cherries looked threatening on the break. Lallana and Philippe Coutinho looked particularly classy.

In the 20th minute, Liverpool’s good opening to proceedings paid dividends. Markovic’s clever pass found Henderson, who squared the ball across the six-yard box for Sterling to head home. It was no more than Rodgers and his side deserved.

Seven minutes later it was 2-0, and the Reds were flying. Markovic rifled home his first goal for the club from 18 yards, after Coutinho’s effort had been saved by Boruc. It’s been a tough few months for the 20-year-old Serb, but it was a moment that could spark his season into life.

Seconds later Yann Kermorgant should have reduced the deficit, but blazed over with the goal at his mercy.

Liverpool continued to completely control proceedings up until the interval, highlighting just what a gap there still is between the Premier League and the Championship.

Gerrard blocked crucially from former Everton man Dan Gosling, while a typically speedy run from Sterling at the other end eventually saw him denied by Boruc.

At the end of a highly satisfactory first-half, the Reds led 2-0. It had been a terrific performance.

Mamadou Sakho came on for Dejan Lovren for the second-half, and it was reported that the Croatian had picked up an injury.

Six minutes into the second-half, the game was pretty much put to bed by Sterling. The 20-year-old weaved past a couple of challenges before finishing clinically past Boruc.

The Reds continued to bomb forward, and it was a joy to watch them playing with so much freedom and confidence for the first time since dispatching of Spurs back in August.

In the 57th minute it was 3-1, however, as Gosling’s shot slipped tamely past Brad Jones and into the net. It was yet further proof of Liverpool needing to invest in a new goalkeeper in January.

Sakho headed wide, as the Reds tried to regain their composure, while substitute Ryan Fraser headed just wide for Bournemouth. It was a test of Liverpool’s resolve, given their lack of confidence of late.

Sterling missed a wonderful chance to complete his hat-trick in the 67th minute, after a clever flick by Lallana, but fluffed his lines with a poor finish.

Gosling hit the post and Matt Ritchie dragged a shot wide, as the Reds’ defence really started to look shaky under pressure from the hosts. Howe’s side were enjoying a terrific spell.

Emre Can came on for Coutinho with 16 minutes remaining, as Rodgers tried to sure things up in the midfield a little. It seemed to work, and the Reds managed to see the rest of the game out with relative ease.

Liverpool are through to the Capital One Cup semi-finals, and Rodgers must feel this is now a genuine chance of trophy glory this season.