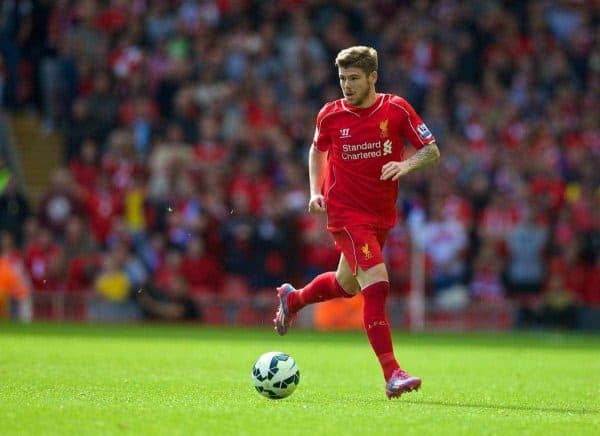 Aaron Cutler is full of praise for Liverpool’s two Spanish full-backs, both of whom impressed last night.

If Liverpool have sleepwalked through the majority of this campaign Monday night saw them awake from a slumber. A vibrant display laced with movement, ingenuity and cutting edge dismantled Swansea and reinvigorated players and fans alike.

With confidence and momentum restored the reds are primed for a delayed assault on the top four; a fanciful ambition only weeks ago.

Last night’s victory was out of keeping with much that preceded it. Seldom have Liverpool pressed so intensely, created so readily and scored a hatful. Rarer still was the sight of summer recruits energised and playing without fear or pressure.

Adam Lallana was the undoubted star, rightly lauded throughout the press and social media this morning. However his match winning display was complimented in no small part by fellow signings Javier Manquillo, Alberto Moreno and Emre Can. Indeed as the team progress so too do these budding youngsters, each acquired with the future in mind.

In the case of our two Spanish fullbacks neither was afforded the desired settling in period. With injuries sidelining Glen Johnson, Jose Enrique and Jon Flanagan at any one time an immediate baptism of fire commenced, spawning mixed results.

Moreno showed initial promise, a tendency to overlap and penetrate the final third refreshing. That said occasional lapses in concentration and a loss of bearings led to high profile errors, chipping away at confidence. A harsh and lengthy exile followed, Moreno the initial scapegoat for Liverpool’s supermarket sweep mentality.

On the flipside Manquillo has fared averagely. The attacking flaws in his game are contrasted by sound positioning and sensible if unspectacular defending. In truth the former Atletico Madrid man would receive far greater fanfare in decades gone by, his performances belonging to an age where defenders simply defend.

In many ways Moreno and Manquillo complement each other. The former is lightening quick and gung-ho yet defensively fragile, while the latter is steady and reliable if inhibited. A ying and yang combination they offset each other perfectly last night.

Moreno’s attacking instincts were evident from the off, linking well with Philippe Coutinho and overwhelming a bewildered looking Ashley Richards. A well deserved goal was testament to his running power and desire, a perfect surge demanding of Jordan Henderson’s cross. Moreover he was defensively alert, aiding Mamadou Sakho with the kind of cover Lazar Markovic deems ugly and unnecessary.

Across field Manquillo was equally impressive, albeit in his customary understated fashion. Providing a consistent if fruitless outlet he focused his efforts on protecting Can and stifling Gylfi Sigurdsson. A goal aside, they marshalled the Swans’ talisman well.

One of Manquillo’s great traits is stopping the cross. It sounds simple enough but Glen Johnson rarely blocks the source of an attack, giving way to the usual pandemonium that ensues whenever Skrtel and co are asked to defend aerially.

He is also rarely flustered. One of the great myths to stem from this season was that Yanick Bolasie humiliated him at Selhurst Park. Sure, the Congolese was pacey and menacing but Manquillo stood up manfully and was by no means overawed.

Manquillo has made no defensive errors in the Premier League this term. He is the definition of solid, those considered foundations a great base from which to build.

In time he will need to develop the attacking side of his game, particularly if Liverpool are to persist with their 3-4-3 variation. To date he has created just one chance in the Premier League, while the average distance of his passing is shorter than all but Jose Enrique. That said, dependability can prove invaluable when the team is playing itself back into form. Risk and reward will come in time.

Indeed it has been evidenced. Our abject Champions Leaague showing would have been worsened still had Manquillo not ventured up field and won an injury time penalty at home to Ludogrets. In essence that positivity earned a Europa League place. Do we thank him for that?

Manquillo often creeps up into good positions only to underwhelm. A simple square ball has replaced an ill-advised tendency to cross speculatively. Rodgers and co will no doubt dedicate hours to honing that final ball and key pass. Once acquired, they will have a quality full back at their disposal.

By contrast Moreno has made three defensive errors domestically. His frailties however are a consequence of those attacking instincts, 15 chances created thus far and two goals scored. If he can add positional discipline to his game – the kind hinted at last night – he has all the tools to become a top class, modern day full back.

Lest we forget this is a 22 year old who attracted interest from Real Madrid last summer and muscled his way into the international set-up. Unlike Hodgson’s England Spain are not prone to capping any half decent, middle of the road national.

Those quick to write off this pair will eventually be forced to eat humble pie. Between them they have just 74 (senior) league appearances under their belt and few defenders were deemed finished articles at 20 or 22.

Both have work to do, as do the club in nurturing their talents. However we are beginning to see flashes of potential and that promise alone is enough to outrank supposed superiors.

New Year celebrations often come with a vow to do away with the old and usher in the new. Brendan Rodgers would be well advised to follow that motto. Our mini revival is due in no small part to the fresh impetus of youth. There can be no turning back.