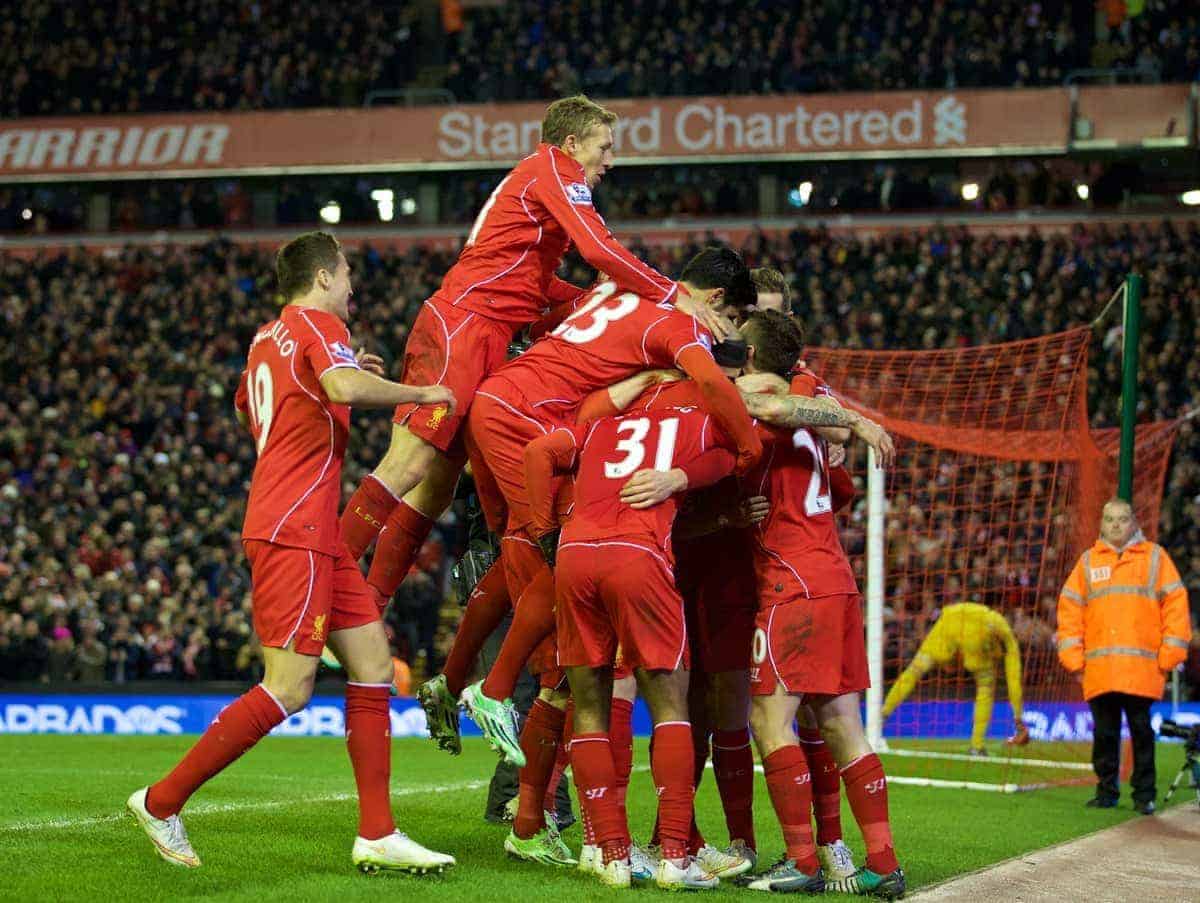 Liverpool romped to a superb 4-1 win over Swansea at Anfield on Monday night, with a double from Adam Lallana, an own goal from former Red Jonjo Shelvey and an Alberto Moreno strike inspiring Brendan Rodgers’ side to arguably their finest win of the season so far.

Brendan Rodgers made four alterations to the team that beat Burnley 1-0 on Boxing day, as Liverpool looked for another festive victory.

Kolo Toure made way for the impressive Emre Can at centre-back, Steven Gerrard was rested with Jordan Henderson returning to the middle of the park, while Simon Mignolet, Javier Manquillo and Alberto Moreno also came in.

Brad Jones and Lazar Markovic didn’t retain their places- Jones because of injury- while former Red Jonjo Shelvey started in a dangerous looking Swansea side.

Martin Skrtel headed straight at Lukasz Fabianski after five minutes, as Liverpool enjoyed a dominant and impressive opening to proceedings.

Raheem Sterling was then denied by the former Arsenal goalkeeper, and Adam Lallana fired over from close-range from the rebound. Philippe Coutinho tested Fabianski soon after.

The visitors offered virtually nothing in terms of attacking play in the first 25 minutes, and although they started to come into the game a little, Rodgers’ side looked comfortable for once at the back. Can’s inlusion, coupled with Mamadou Sakho’s form, definitely had something to do with that.

Nathan Dyer’s tame header was Swansea’s first effort of note on the half-hour mark, but in the 33rd minute Liverpool were ahead.

Lallana and Henderson combined well, with the latter’s cross finding Moreno to fire home from six yards out. It was his first Anfield goal, and gave his side a deserved lead.

Coutinho forced Fabianski into a good save from a tight angle, as the hosts continued to impress greatly. There had arguably not been a more dominant first-half display from them this season.

Garry Monk’s men enjoyed a decent end to the half, without creating a huge amount, while the impressive Coutinho’s long-range strike tested the busy Fabianksi.

At half-time it was Moreno’s goal that was the difference between the two sides.

There were no changes at the interval, as Liverpool looked to build on an excellent opening 45 minutes.

After 50 minutes, one of the most bizarre goals Anfield has seen in many years occurred. Fabianski’s kick was charged down by Lallana, and the ball looped into the Kop net. The lead was doubled.

A minute later it was 2-1, however, and the Reds conceded just after scoring exactly as they did against Arsenal. Gylfi Sigurdsson pounced from close-range following indecisive Liverpool defending.

Wilfried Bony forced Mignolet into a good save and Sterling hit the post moments later, and it had been a wonderfully entertaining opening 10 minutes of the second-half.

Lallana hit the target after 60 minutes, as the game continued to look extremely open. A minute later, the 26-year-old made it 3-1 though.

It was 4-1 midway through the second-half, as Shelvey’s misdirected header from Henderson’s corner went in. The young Englishman had been lucky not to see red after an elbow on Can in the first-half. The Reds were rampant, and Anfield was joyous.

Coutinho, who was sensational at times, fired over, while on a rare negative note, Sterling was fortunate not to be red carded after lashing out at Federico Fernandez.

Henderson shot wide from 30 yards in the final few minutes, and substitute Mario Balotelli almost scored his first Premier League for the club.It was the last real moment of note in the game.

It had been a wonderful Liverpool performance on the whole, and was a superb way to finish 2014 after an up and down year.