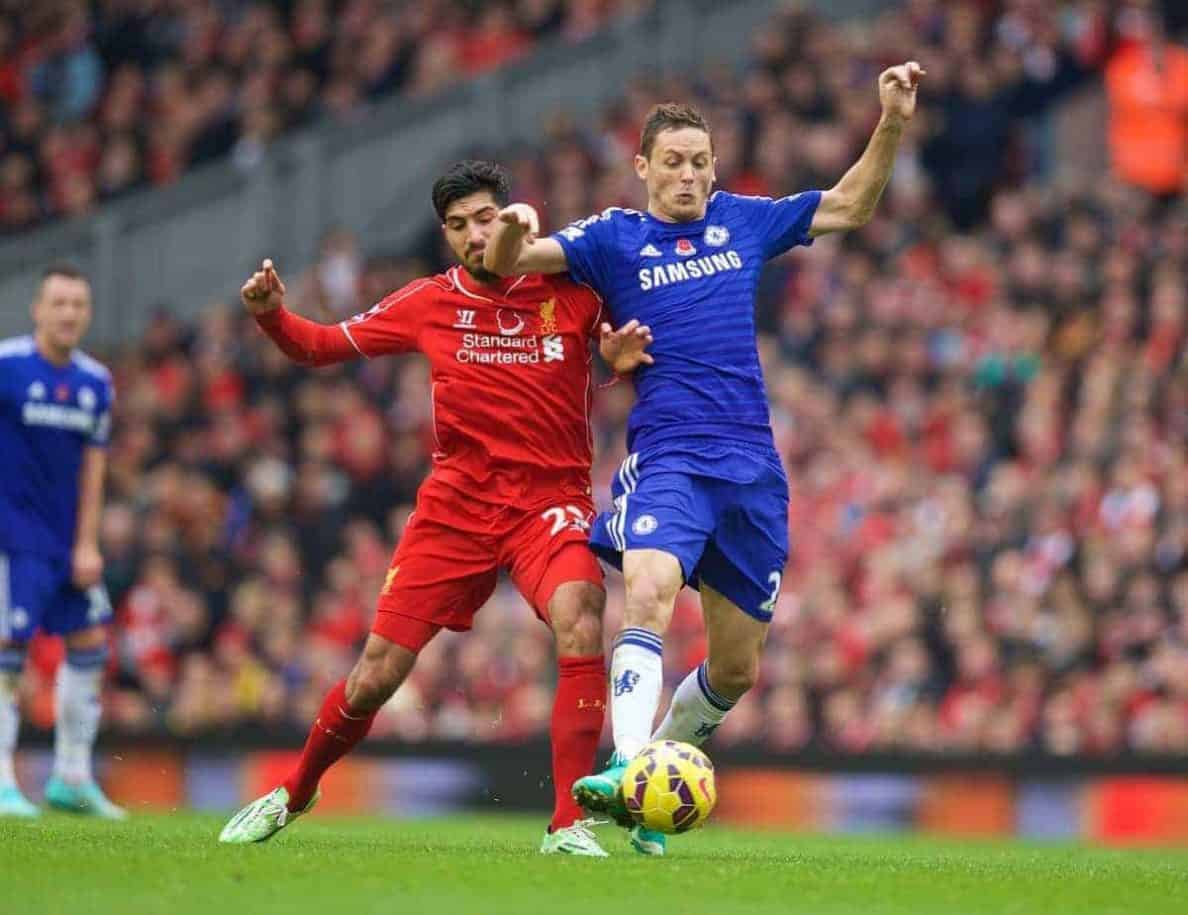 Liverpool welcome Chelsea to Anfield on Tuesday night for the first leg of the League Cup Semi Final tie with the Premier League table-toppers – a competition which represents the best opportunity for the Reds to grasp silverware this season.

Unfortunately, Jose Mourinho’s Chelsea are in formidable form this season, and a 5-0 away victory over Swansea City on Saturday underlined their excellence.

Furthermore, Mourinho is unlikely to take this encounter lightly, despite the numerous challenges his thin Chelsea side face this season, so a very strong Blues side is to be expected.

Liverpool are in great form themselves, with four wins in their last five, ensuring a tense match-up.

How does Brendan Rodgers get one over his former boss?

Here are three areas Liverpool must target against Chelsea in Tuesday night’s Capital One Cup tie.

Re-signed from Benfica a year ago, Matic has made the Chelsea midfield his own, and is working on redefining the fabled ‘Makelele role’ in his image.

With 3.7 tackles and 2.3 per game, more than any other Blues player, Matic serves as Chelsea’s midfield base, and a platform to build attacks.

But, equally, Matic’s strengths can become a way to exploit Chelsea, as Mauricio Pochettino showed in Tottenham Hotspurs’ 5-3 victory over the Blues on New Year’s Day.

Prior to that game, Matic highlighted Spurs midfielder Christian Eriksen as their biggest threat, claiming: “He is a great player…I will try to watch out for him because he will be playing near my position.”

Unfortunately, this was an error by the midfielder, who afforded Eriksen too much respect.

Matic was dragged out of position by Eriksen’s movement, and Spurs pair Nacer Chadli and Harry Kane were allowed to run riot with a gulf open in midfield.

Liverpool’s man on Tuesday night could be Raheem Sterling, fresh from a battery charging break in Jamaica and 85 minutes against Villa on Saturday.

Sterling’s movement is arguably unparalleled in the Liverpool squad, and will likely be highlighted as one of the Reds’ most important players by Mourinho.

Rodgers must use this to his advantage, as Pochettino did in the Premier League, and utilise Sterling’s pace and dangerous movement to occupy Matic and drag him out of position.

Comparatively, with 2.8 tackles and one interception on average per game, Matic’s regular midfield partner Cesc Fabregas is a poor defensive talent, and this would allow the likes of Alberto Moreno, Lazar Markovic and Philippe Coutinho to come inside and hurt Chelsea.

Cahill has made the most defensive errors of any Chelsea player in the Premier League this season, with four—the same amount as Martin Skrtel has for Liverpool.

This is largely due to a significant deficiency in Cahill’s game, as noted at ChelseaIndex in December:

“Cahill does not have the sense of reading the danger before it occurs and that often leaves the defence in sticky situations. Cahill was very good when he played in a low-block, like the system that the club employed under [Roberto] Di Matteo and [Rafa] Benitez, and often last season.”

Mourinho has made it his prerogative to field a high defensive line after criticisms of his side’s playing style last season, and this does not play to Cahill’s strengths.

Cahill is not the most adept at reading defensive situations, more relying on his physical capabilities—much like Skrtel.

He is also susceptible to pressure when on the ball, as evidenced by his mistakes this season.

Liverpool must take advantage of this and put consistent pressure on Cahill, either on the counter attack or through Rodgers’ typical attacking overload, and snap up any mistakes.

Coutinho will be crucial in this scenario, with his tenacity, determination and creativity perfect for this role.

Rodgers has compensated for Skrtel’s weaknesses in recent weeks by deploying Emre Can and Mamadou Sakho alongside him in back three, offering him support.

Liverpool will find a more isolated figure if Cahill is fielded on Tuesday, and can exploit this.

Just as with Matic, one of Chelsea’s best players, Eden Hazard, can become one of their most fragile if Rodgers imposes the right tactical approach.

This comes in the form of the regular lapses in concentration, which were most famously noted in his inability to track back in Chelsea’s 3-1 Champions League loss to Atletico Madrid in 2014.

It may be a while ago now, but these issues still prevail for the 24-year-old.

Barring Diego Costa, Hazard is the least effective defensive player of any regular starter for Chelsea this season, and it is a lack of application in this phase that Liverpool should exploit.

Hazard has made just 0.8 tackles and 0.6 interceptions on average per game this season.

Rodgers’ 3-4-2-1 system has often seen Markovic deployed on the right-hand side of the midfield, or as a right wing-back, and the 20-year-old’s runs from deep proved devastating in a man-of-the-match display in the Reds’ 1-0 victory over Sunderland earlier this month.

Markovic would match up against Hazard, and the Serbian winger’s own concentration and persistence will be key.

If Hazard fails to track back, or recognise a dangerous attack building, as he did against Atletico in the Champions League, Liverpool could overload Chelsea and hurt them.

Markovic will be key in this situation, as will Sterling and Fabio Borini, whose movement between the lines in the attacking third could intersect John Terry and Felipe Luis.

It is a given that Liverpool will need a margin of luck to gain a victory in this tie, but if the Kop smiles down on them, a first-leg win is not out of the question.

Can Liverpool gain a Capital One Cup first-leg victory over Chelsea on Tuesday? Let us know in the comments below.