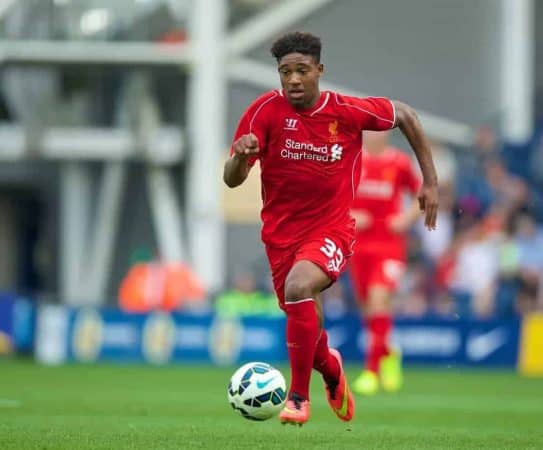 Confirmed: Liverpool recall Jordon Ibe – Where does he fit over rest of the season?

Brendan Rodgers has recalled 19-year-old winger Jordon Ibe from his loan spell with Derby County, with a first-team role in mind for the promising youngster.

The move comes after Rodgers said earlier this month that “If we do bring him back it will be to contribute. I’ve seen Jordon in a lot of the games and he’s been outstanding.”

This seems an interesting move by Rodgers, given the progress Ibe is making at the Championship side.

But it does beg the question, where does Ibe fit in at Liverpool this season?

Ibe joined Derby on an initial season-long loan deal at the start of the season, with manager Steve McClaren describing him as “a direct player with plenty of ability [who] will certainly strengthen the attacking options.”

After his full debut for the Rams, in a 2-0 League Cup win over Reading in September, McClaren continued the praise:

“We wanted to bring players here who can get the crowd on the edge of their seats when they pick the ball up. That is what Jordon has done. He has lit us up when he has played.”

The 19-year-old definitely lit up the crowd in his best display of the season so far, in a 4-0 away win over former loan club Birmingham City, capped by a stunning solo goal.

In 20 Championship games this season, Ibe has scored five goals and made one assist.

Deployed predominantly on the left-hand side of Derby’s 4-3-3 formation, Ibe has also deputised a right winger when required, with four starting appearances on that flank.

Ibe has displayed his direct, pacey wing play at the County Ground this season, making 2.6 dribbles on average per game—at least one more than any other Derby player.

McClaren—proving an exceptional manager since taking over the Rams in 2013—outlined Ibe’s progress for the club in December, claiming “he’s learning to be a team player and developing into that. He’s learning he needs end product to his game.”

Perhaps fearing a recall, McClaren underlined his good work with the youngster who has clearly impressed Rodgers.

At present, given Rodgers’ switch to a 3-4-2-1 formation recently, and its subsequent success, it seems a bemusing move for the manager to curtail Ibe’s progress at Derby, given Liverpool already have an abundance of attacking options at their disposal.

In the 3-4-2-1, Rodgers has two options for his pacey, direct attacking players.

Firstly, the two attacking midfield roles behind the lone striker—the latter role will eventually be assumed by a returning Daniel Sturridge.

So far this season, Rodgers has deployed Philippe Coutinho, Adam Lallana and Steven Gerrard in these roles.

Having started every game in a central advanced playmaking role since the switch to this formation, Coutinho has made himself an indispensable feature for Rodgers, with his creative game improving significantly.

His regular partner, Lallana, has enjoyed an increase in form since moving into a regular central role, too, with this arguably being his most effective position.

Furthermore, Rodgers has seemingly noted Gerrard’s inability to function in a deep-lying role of late, and has taken measures to field the departing captain in his former position.

With Sturridge’s return, it is likely that Raheem Sterling could occupy one of these roles on a rotational basis, too.

Sterling could also feature at wing-back, where Javier Manquillo, Jordan Henderson, Jon Flanagan, Glen Johnson could all feature, as well as Alberto Moreno and Lazar Markovic, who have been outstanding in these roles of late.

At this juncture, having assessed Liverpool’s options in both of these positions, it would seem that Rodgers would struggle to slot Ibe into his starting line-up in a 3-4-2-1, so where can Ibe feature for Liverpool this season?

Where Can Ibe Feature For Liverpool This Season?

Analysing Ibe’s game suggests that he is only suited to one of these positions, limiting his options even further.

To perform as a wing-back, a player must be able to support the defence as well as the attack, and Ibe’s statistical output compared to Rodgers’ current options in that area is stark:

(Note: Statistics via WhoScored.com and based on average output per game. Flanagan statistics from 2013/14 season.)

Naturally, with Ibe playing in an advanced position compared to these players, these results cannot be entirely conclusive, but it can be suggested that his defensive output would not suit a wide role in this formation.

This leaves one of the advanced attacking roles, with the excellence of Coutinho and Lallana in this role, Gerrard looming and Sterling likely to move into contention soon, Ibe’s prospects seem limited.

Furthermore, naturally Ibe is more suited to a wide role, rather than a central one.

Of course, with the Europa League knockout stages beginning in February, and with Liverpool currently also vying for the Capital One Cup and the FA Cup, there is plenty of opportunity for squad rotation.

It is likely that, with Rodgers’ stressed that there will be little January transfer activity for the Reds, Ibe has been recalled to fill a squad role—perhaps with Suso’s departure in mind.

This leave McClaren’s words ringing, as surely Ibe’s development would be best served by staying at Derby for the season.

Brendan Rodgers may be covering all bases by recalling Jordon Ibe from his successful loan spell with Derby County this January, but the Liverpool manager risks stifling the development of one of the club’s most promising young talents by restricting him to a peripheral squad role.

Is Brendan Rodgers right to recall Jordon Ibe from Derby County? Let us know in the comments below.