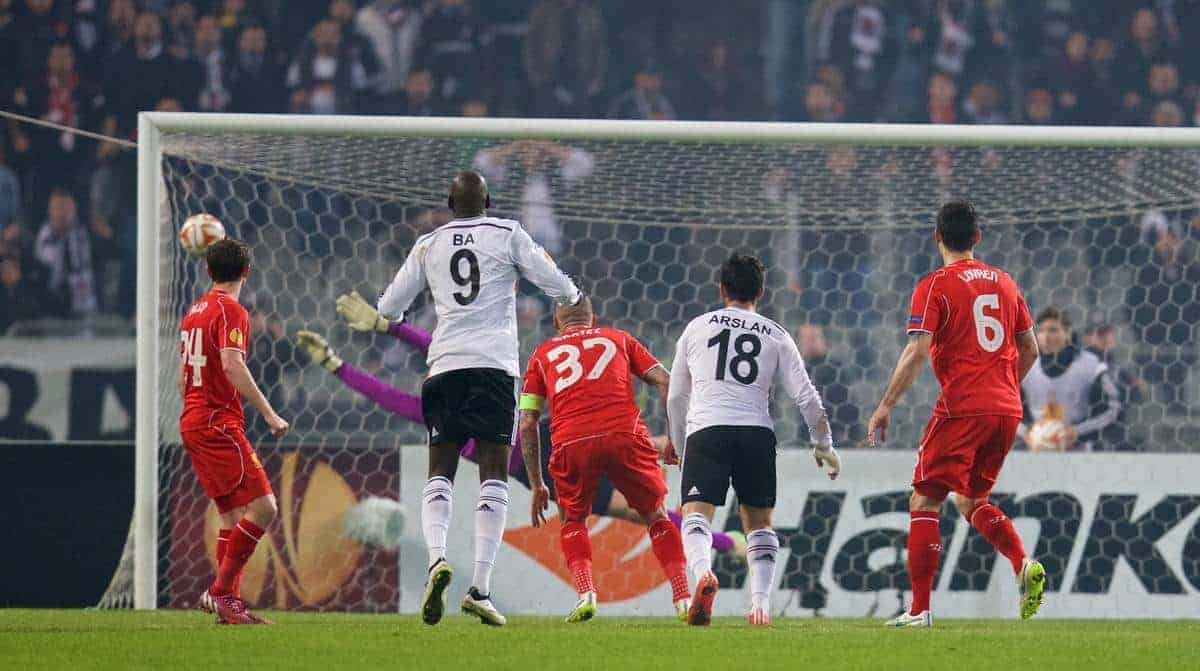 Liverpool lost 5-4 on penalties to Besiktas on Thursday evening, having lost 1-0 in normal time, as Dejan Lovren‘s missed penalty saw the Reds deservedly eliminated from the Europa League. Brendan Rodgers made four changes to the side that beat Southampton 2-0 on Sunday, with the Northern Irishman keeping half an eye on this weekend’s Premier League showdown with Manchester City at Anfield.

Kolo Toure came in in defence, with Emre Can pushing into midfield, while Alberto Moreno, Daniel Sturridge and Mario Balotelli all started. Jordan Henderson, Lazar Markovic and Philippe Coutinho were left out.

The Besiktas fans produced an outstanding atmosphere inside the Ataturk Stadium, but Liverpool dealt well with the vociferous support in the early stages.

Raheem Sterling’s rasping strike was kept out by Cenk Gonen in the 20th minute, and the 20-year-old almost stole in twice more soon after. The Reds were the superior side.

Sturridge tested Gonen, and Moreno shot tamely at the hosts’ goalkeeper after nice link-up play with the England striker.

At half-time it was goalless, and Liverpool were 45 minutes away from qualifying for the last-16. Besiktas had offered almost nothing, but that was soon to change.

Serdar Kurtulus and Jose Sosa tested Simon Mignolet from range soon after the restart, and the Turkish giants looked a different proposition from the first-half. So did Liverpool, sadly.

Gokhan Tore fired over the on the hour-mark, as the hosts continued to look threatening. The likes of Sterling and Sturridge were struggling to get into the game, and it looked set to be a nervy final 30 minutes.

Tolgay Arslan shot inches wide with a stunning 35-yard strike in the 70th minute, but two minutes later he produced a superb finish to give Besiktas the lead. They deserved it given their second-half dominance.

As extra-time loomed, the Turks looked like the only winners in normal time, and Liverpool simply couldn’t muster any kind of goal threat.

In stoppage-time the dangerous Demba Ba thundered a strike off the crossbar, as the Reds stayed in the competition by a whisker. Extra-time was required.

Ba forced Mignolet into a decent save after 99 minutes, and Liverpool’s only chance of progressing appeared to be via penalties.

Chances were few and far between throughout the rest of extra-time, and it would be spot-kicks that would decide the Reds’ fate once again at the Ataturk.

Dejan Lovren missed the decisive penalty, as Liverpool crashed out of the Europa League 5-4 in the shootout. Their performance hadn’t merited anything better.