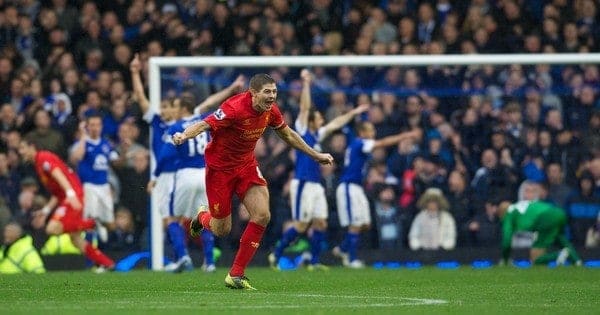 Liverpool captain Steven Gerrard will run out at Goodison Park for his final Premier League Merseyside derby with a clear message to his Everton detractors: “Bring it on.” Gerrard has been the target of abuse from the blue half of the city from almost the moment he made his debut in 1999. He even “had some stick” from an Everton supporter earlier this week but confessed he enjoyed the banter with Toffees fans – even if dealing with terrace chants and the odd barbed comment will be an issue he leaves behind for his team-mates when he moves to Major League Soccer.

Only Ian Rush has scored more Liverpool goals against the Toffees than the 34-year-old, but, with his time in English football coming to end, the last few months of the season are being seen as a chance to celebrate his career and contribution to his boyhood club.

The Scouse captain accepts his summer departure to the Los Angeles Galaxy does not mean Toffees fans will change their stance. “I doubt it very much,” he said. “We’ll have to wait and see on that one.

“I had some stick from an Everton fan yesterday but it is part of my life living in this city.

“I love the banter with Everton fans. It’s what it’s all about. It’s about rivalries and big games of football.

“It will be my last derby and it will be someone else’s turn to be in the spotlight.

“It becomes Jordan Henderson‘s problem (as he is likely to succeed Gerrard as captain) and Jon Flanagan‘s problem (as a local lad) because the Everton fans will soon turn on them.”

Gerrard has a habit of getting under Everton‘s skin, whether it is on the pitch – where he has scored 10 goals in 32 appearances, including the first Anfield hat-trick in 77 years in 2012 – or off it.

After the 2-2 draw at Goodison in October 2012, Gerrard was forced to backtrack on comments likening their near-neighbours to Stoke in being a long-ball team. He admitted his frustration got the better of him and he went “too far”.

“I’ve got respect for all the Everton players and the Everton fans,” Gerrard, who picked that hat-trick and the FA Cup semi-final win at Wembley in 2012 as his derby highlights, told LFC TV.

“I think they’re a terrific football club but, once that whistle goes, I want to beat them. That’s a good problem for me.

“It’s the fixture that I look for at the beginning of the season.

“I love playing against Everton. I’ve got friends and family members who are big Blues and it’s all about the bragging rights in the city.

“I’ll focus on (Saturday’s game) exactly how I have done in the previous derbies I’ve played in.

“It’s a bit different from a normal league game, but I’m looking forward to that one and hopefully I can add to my good derby record.”

Liverpool’s key players in their recent resurgence have been the likes of Raheem Sterling, Philippe Coutinho, Lazar Markovic, Emre Can, Jordan Henderson and Mamadou Sakho and all are aged 24 or under. But despite their relative youth – Sterling, Can and Markovic are all just 20 – manager Brendan Rodgers is confident they will cope with the atmosphere of an away derby against more experienced opponents. Liverpool are unbeaten in their last seven league matches, having won the last three, while Everton recorded their first win in seven league matches at Crystal Palace last weekend. But if the Reds have any psychological advantage, Rodgers is not playing it up.

“At this moment in time we as a team are operating at a really good level,” he said. “We should have won the game earlier in the season, that is the reality, but we are hoping going to Goodison we can put in a performance.

“It was a difficult part of the season (for Everton), like us they had a lot of games, but Roberto (Martinez) is a good manager and he will be looking to build some sort of momentum.”