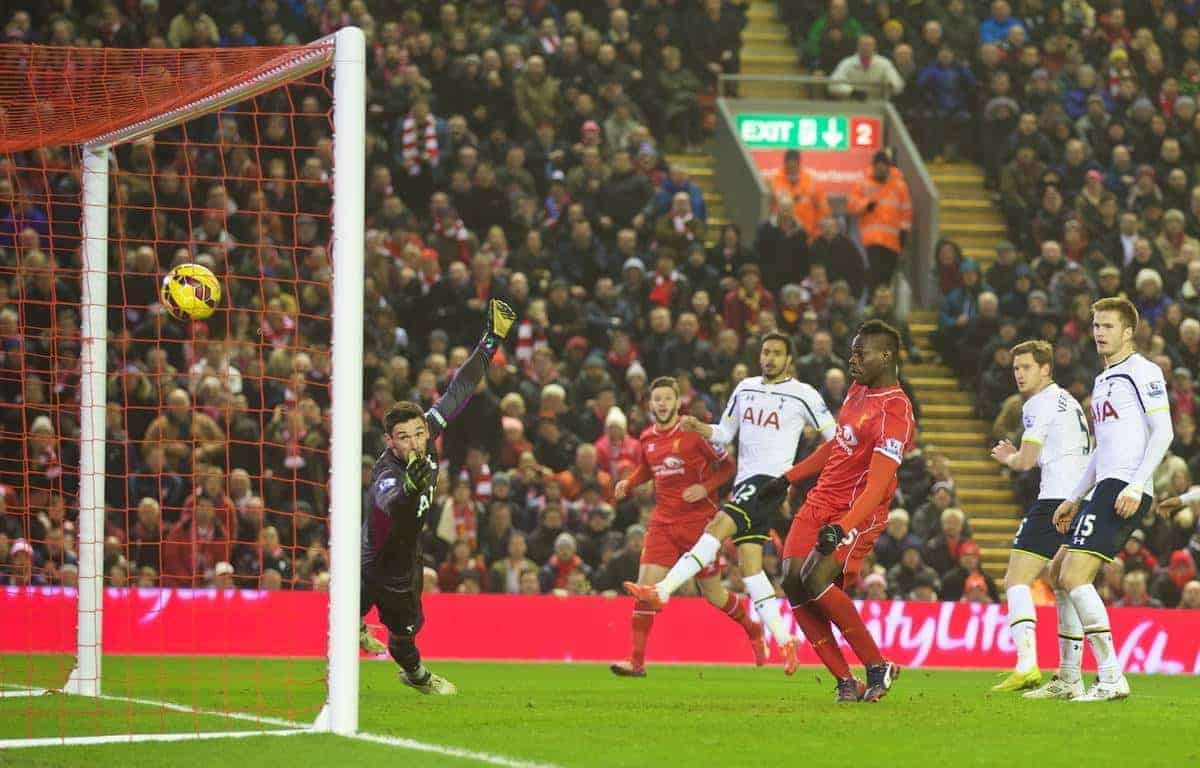 Liverpool won 3-2 against Tottenham in a pulsating clash at Anfield on Tuesday evening, enhancing the Reds’ Premier League top-four aspirations in the process.

Brendan Rodgers was forced into making two changes from Saturday’s 0-0 draw with Everton at Goodison Park.

Raheem Sterling missed out with a foot injury and was replaced by Lazar Markovic, while Daniel Sturridge made his first Liverpool start since August, in place of the injured Lucas Leiva.

Steven Gerrard started in a deeper midfield role than of late, despite looking tired against the Toffees, while Jordon Ibe kept his place after a very impressive showing at right wing-back.

Victory was much-needed for the Reds, in order to keep their top-four aspirations alive, and they faced an unchanged Spurs team fresh off the back of a memorable win against north London rivals Arsenal.

Steven Gerrard's third start in a week, his 29th in total this season.

Sturridge had the first chance of the game, racing through on goal before scuffing his right-footed shot. Gerrard then curled a free-kick just over Hugo Lloris’ crossbar.

Markovic volleyed a close-range effort well over after 11 minutes, as Liverpool dominated the early stages of the game. Lloris made a superb save to deny Sturridge soon after, and Joe Mason tested Simon Mignolet at the other end.

In the 15th minute the Reds were ahead. Markovic ran at the Spurs defence, and his left-footed shot squeezed a little tamely past Lloris’ dive.

After 25 minutes it was 1-1, however, and it was that man Harry Kane who scored. Erik Lamela found the 21-year-old inside the area, and he finished clinically past Simon Mignolet. It all seemed a little too easy though.

The game continued to ebb and flow, and Sturridge hit the post with an audacious back-heel, but at half-time it was 1-1. It had been an unbelievably open contest.

Seven minutes after half-time Liverpool were correctly awarded a penalty, after Sturridge was fouled by Danny Rose. Gerrard dispatched the spot-kick, and Rodgers’ men were back ahead.

Mignolet made a sublime save to keep out Erik Lamela’s long-range shot, as the visitors continued to look very threatening in attack. Lucas was a huge loss in the middle of the park.

It was 2-2 soon after, however, as Moussa Dembele converted Kane’s cross. The latter looked offside though, and Spurs had also been awarded a very soft free-kick in the lead-up to the goal.

Dejan Lovren replaced Gerrard midway through the second-half, with Emre Can moved further up the pitch, while Alberto Moreno forced Lloris into a smart save. Could the Reds find a late winner?

With seven minutes remaining, something remarkable happened; Mario Balotelli scored. The Italian, on as a substitute, poked home fellow sub Adam Lallana‘s cross from six yards out, amid scenes of great joy inside Anfield. It was his first Premier League goal for Liverpool.

The Reds held on in a nervy finale, earning a vital win over their Champions League rivals in the process.