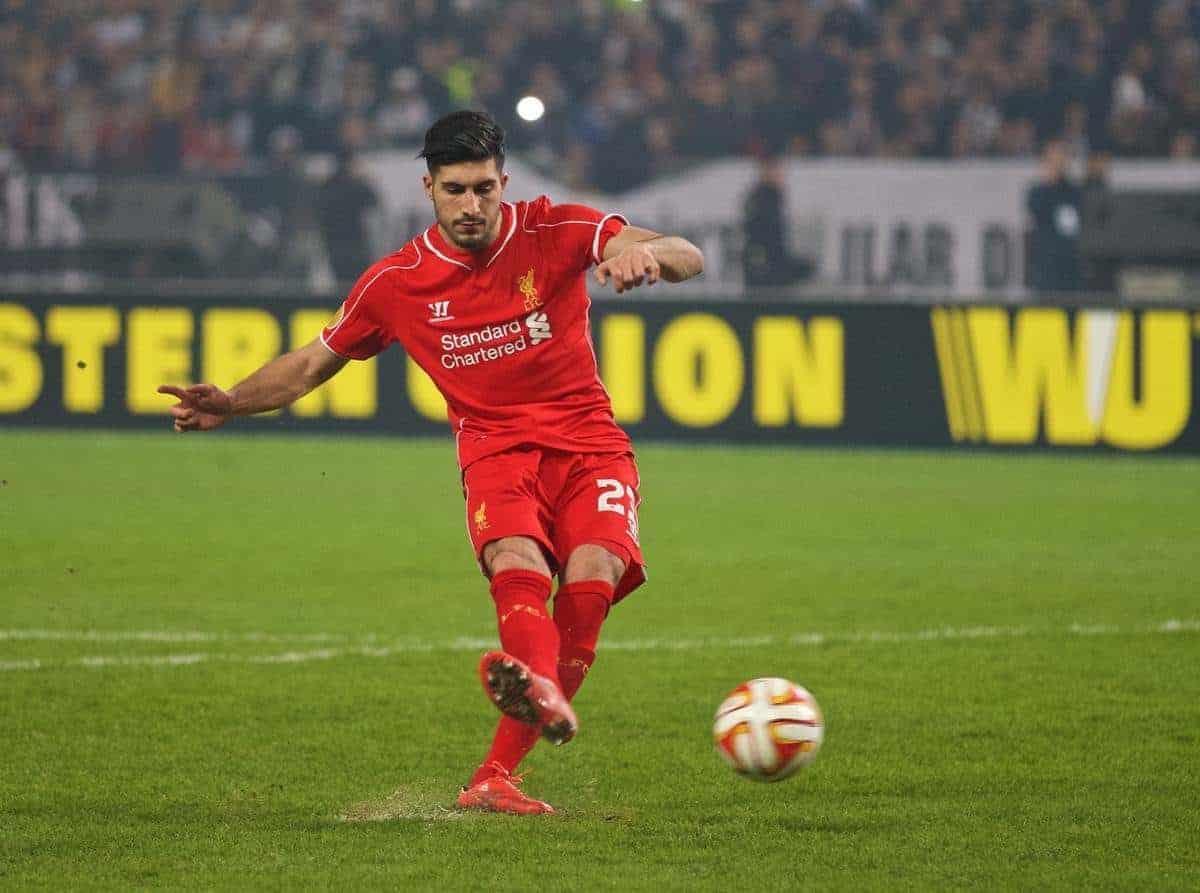 Liverpool’s second European exit of the season demonstrated perfectly why Emre Can should remain in the Reds back line for the time being, writes Ben Twelves. The moment Reds fans had been waiting for finally materialised in Thursday night’s Europa League exit to Slaven Bilic’s Besiktas, as Emre Can commenced a natural midfield role from the off in the Liverpool XI.

Taking the place of Jordan Henderson alongside the improving Joe Allen, the powerful German didn’t enjoy his best night in a red shirt in the draining penalty shoot-out loss, resulting in debates following over where the 21-year-old’s imminent future on the pitch lies.

So where exactly should Emre Can currently feature in Liverpool’s starting line up?

“My favourite position is central midfield and the manager knows that, but if I get a chance to play and help the team I will happily play at the back” – Can speaking to Liverpoolfc.com

As displayed on occasions Thursday night, Can brings power, dynamism and physicality to the midfield alongside his excellent technique and footwork but endurance currently evades the midfielder who is in need of a rest.

15 – Emre Can has played every single minute of Liverpool's last 15 games in all competitions. Reliable.

The £10million bargain struggled to get to grips with the pace of the game in central areas and was often caught the wrong side of the play with his pressing proving ineffective at times, taking him out of the game and leaving gaping spaces in the middle of the park for others to cover.

Can’s trademark marauding runs from deep failed to materialise in a congested area of the pitch against Besiktas’ midfield battlers, and he struggled to help support a blunt Reds attack – providing very little service with the ball and off-the-ball running – illustrated with no shots on goal (penalty aside) or key passes played in two hours of football.

Of the midfield partnership in Istanbul, it was in fact Allen who produced the more positive performance, with the Welshman providing a calming and composed influence in the middle of the park.

While his potential to play in his “favourite” position in the long term is blindingly obvious and it was far from a performance full of negatives – Can demonstrated some superb footwork and battled admirably completing the highest amount of tackles of any Liverpool player – the time for the former Bayer Leverkusen man to play consistently in his preferred role isn’t now.

The Germany under-21 international has been a vital contributing factor to Liverpool’s outstanding defensive improvement, and his dominating presence was sorely missed in the Ataturk Stadium.

As a result of his absence in the back three with Kolo Toure and Dejan Lovren filling the roles instead, Liverpool’s play suffered hugely with their inability to play from the back – which resulted in the Reds playing long balls far too often and failing to find control through midfield.

While Toure did a decent job and is defensively reliable – in contrast to the hapless Lovren – neither of the gap-fillers provide the same composed manner on or off the ball either side of Martin Skrtel – where the multi-finction Can has acted superbly as an assured stabiliser alongside the Slovakian.

As the Reds became more and more penned in under the relentless Besiktas pressure – especially in the second half – it was plain to see how much of Liverpool’s play was lost with no defensive figure able to step out with the ball and assert the same authority on the game as the young German has during his time in the solid back three.

Toure and Lovren showed that while they are alternatives for fixtures like on Thursday where there’s little other choice for the Liverpool boss to pick from, they must stay as just back-up options with such a decline in performance level following the positional and personnel switches.

While central midfield “is his position and he wants to play there” as Colin Pascoe told a recent press conference – Thursday proved that is simply not as easy as shifting the Germany under-21 into a higher position as his presence and assured nature in the back line disrupts the team’s balance and is so desperately missed.

At a crucial time of the season and in Liverpool’s current position, the team needs consistency in selection and performances and that means Emre Can should not become a permanent fixture in the middle of the park just yet.

Rodgers has previously spoken of the importance of retaining balance and sticking to what works – and while he was right to move Emre Can into midfield in Turkey – he must revert back the tried and trusted with Can resuming his role in the defensive line.