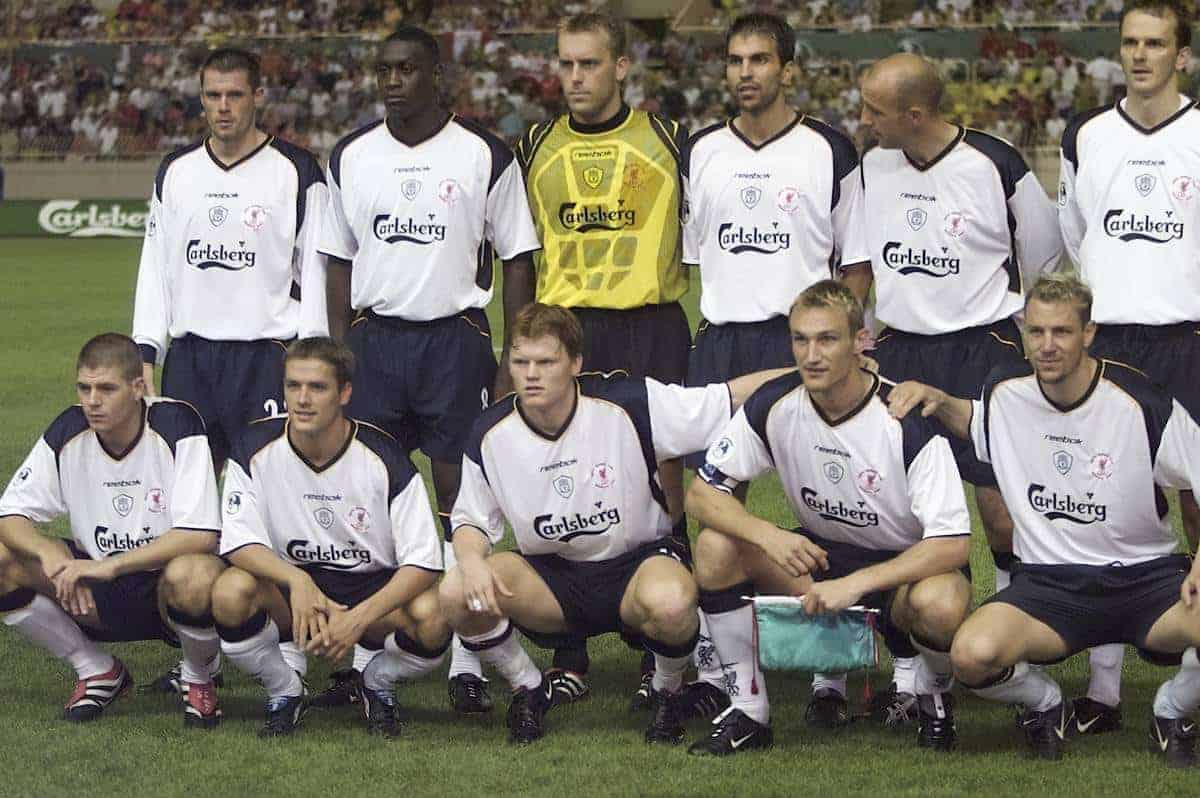 With Europa League, FA Cup and top four aspirations, Liverpool are fighting on three fronts this season, drawing parallels with the 2000/01 season. We take a look at the relative squads.

Houllier’s Class of 2001 couldn’t really have been much further from Brendan Rodgers’ current crop when it comes to style of play.

They were always extremely tough to break down, but lacked the eye-catching, expansive football Rodgers adores. They achieved great success and scored an incredible 117 goals that season.

Not only did they secure Champions League qualification for the first time since it changed from being the European Cup in 1992, they also won an unprecedented cup treble.

They beat Birmingham City on penalties in the League Cup final, Michael Owen inspired them to dramatic FA Cup glory over Arsenal and they defeated Alaves 5-4 in an astonishing UEFA Cup final showdown.

What Houllier’s squad had was a terrific combination of depth and experience, and there is absolutely no way they would have won what they did without it.

Fast forward to the present day, and Rodgers and his side have the potential to come close to matching those feats of 14 years ago.

The Reds are making a serious charge for a top-four finish, having seemingly been out of contention at Christmas, and are in the FA Cup quarter-finals and last-32 of the Europa League.

When you consider the level of confidence and quality Liverpool are playing with at the moment, there is no reason why they can’t enjoy a glorious final three months of the campaign.

The question is: do they have the same level of depth, talent and experience of Houllier’s triumphant side?

All great sides have a largely unchanged back-line, and Houllier’s team were no different.

Sander Westerveld was the undisputed first-choice goalkeeper, playing all but two games throughout the entire season, while Markus Babbel, Stephane Henchoz, Sami Hyypia and Jamie Carragher all made over 50 appearances in all competitions. They were incredibly organised and consistent.

Liverpool were fortunate when it came to injuries to this quartet, but they always had enough depth should one miss out. Christian Ziege, despite being a failure on Merseyside, played 32 games and chipped in at key times, while the likes of Djimi Traore and Gregory Vignal did their bit too.

Simon Mignolet is revitalised in goal, while the back-three of Emre Can, Martin Skrtel and Mamadou Sakho has thrived since the turn of the year. Alberto Moreno, Lazar Markovic and Jordon Ibe have impressed in their wing-back roles, with Rodgers’ switch to a 3-4-2-1 formation working wonders.

Dejan Lovren is showing signs that he is getting used to life in a Liverpool shirt, while Kolo Toure remains a good squad player and someone whose character and experience is vital in the dressing room.

Javier Manquillo has been solid at right-back when called upon, while Jon Flanagan‘s return from injury will provide even more battles for a starting berth. Glen Johnson and Jose Enrique, for all their faults, do have experience and have won a trophy at Anfield before.

Since the change of formation, the Reds have kept six clean-sheets in 11 games. That is largely down to Rodgers barely altering his defence, and it has given the entire side a far more assured look to it.

Rotation is crucial further up the pitch, but it can easily hinder the performances of those at the back if they simply can’t get used to playing alongside certain people.

Liverpool’s midfield under Houllier may have been incredibly narrow, but it was full of talent, work-rate and creativity.

Gary McAllister was a revelation, having joined from Coventry City at the age of 35, and he dovetailed brilliantly alongside the unruffled Didi Hamann, underrated Danny Murphy and emerging Steven Gerrard. They played 199 times between them that season, but were rotated when they needed to be in order to stay fresh.

Patrik Berger was a top-class replacement, and would have featured far more were it not for terrible luck with injures, while Nick Barmby and Vladimir Smicer appeared 46 and 49 times respectively, and scored 15 between them. Even Igor Biscan played 21 times.

Perhaps the most pleasing thing at the moment is that Liverpool are winning games without both Gerrard and Lucas Leiva in the side, outlining their depth in the process. The skipper is clearly not a key man anymore, but his presence and big-game pedigree can still be important.

Joe Allen has come in and done very well on the whole, perhaps because of the added responsibility, while Jordan Henderson continues to grow in stature. Once Gerrard and Lucas return, it gives Rodgers plenty of options.

With Thursday-Sunday games tough to juggle, assuming Liverpool stay in the Europa League beyond Thursday’s clash with Besiktas, keeping his midfield fresh and not overplaying them is imperative.

It’s worth noting that Lucas, Henderson and Allen have scored a measly three goals between them this season- Gerrard has 10, five of which have been penalties- whereas McAllister, Hamann, Murphy and Gerrard scored a combined total of 30 in 2000/01. It is an area that needs to be improved.

Liverpool’s strikers were rotated well by Houllier throughout his side’s march to treble glory, especially as three of them were England internationals at the time.

Emile Heskey (56) featured a little more than Owen (46) and Robbie Fowler (48), but they all contributed at crucial times during the campaign. They made 150 appearances between them, scoring 63 goals, with Owen and Fowler scoring in every final between them.

Jari Litmanen was criminally underused by Houllier, but he still added goals and class when he was used.

This was a squad with almost no proper wingers and a total lack of ‘number 10s’; a total contrast to what we are seeing at Anfield in the present day. Attack is where Liverpool have really thrived over the last couple of years, and Rodgers has an enormous amount of quality there.

Adam Lallana, Philippe Coutinho and Raheem Sterling are all hugely gifted, creative players who can win a game with one moment of magic.

19 goals between the three of them is not a great return by any means, but there is still an awful lot to be positive about with them. Coutinho and Sterling play with a maturity beyond their years, and have shown they don’t freeze in the big games.

Daniel Sturridge is a fantastic striker, and if he can just stay fit he can become truly world-class in the coming years. His goalscoring feats since arriving two years ago are as impressive as both Owen and Fowler in their first couple of seasons at the club.

Mario Balotelli has been a disappointment, despite showing signs of improvement, while Fabio Borini and Rickie Lambert are very limited.

They have just eight goals between them this season, which is simply nowhere near good enough, and their form has forced Rodgers to play Sterling as a lone striker.

Sunday’s League Cup final between Chelsea and Tottenham is officially the first round of cup games this season that Liverpool have not been involved in.

They are still in the FA Cup and Europa League, having been knocked out of the Champions League, and they made it to the semi-finals of the League Cup. That highlights just how heavy their schedule has been.

The 2000/01 side played a total of 63 matches in all competitions, but that number could be usurped by the current crop.

They have already played 42 times, and if they were to go all the way and win their two cup competitions, that final figure would be 65 or 66. That depends on whether the FA Cup quarter-final against Blackburn goes to a replay or not.

Rodgers has done a decent job of keeping his players fresh the more the season has gone on, allowing Sterling to recharge his batteries in Jamaica and realising Gerrard needs to be used more sparingly, but it’s in the next few months that he will really be tested.

This current Reds squad is as strong as Houllier’s in terms of both depth and quality, barring the strikers, but the one thing working against them is experience.

That treble-winning team had an abundance of it, from Hyypia and Babbel at the back, McAllister and Hamann in midfield right through to Fowler and Owen in attack. A lot of them knew what it took to win trophies; something our current heroes do not.

Although there are some experienced heads like Skrtel, Toure, Gerrard and Lucas, this is an unbelievably young squad. The following are all 25 or under: Moreno, Sakho, Lovren, Can, Manquillo, Flanagan, Ibe, Markovic, Allen, Henderson, Coutinho, Sterling, Borini, Balotelli and Sturridge.

Not one of those 15 players has won a trophy during their time at Anfield, and that has to be seen as a potential stumbling block in their quest for glory.

Despite this, Rodgers and his squad have every right to feel unbeatable at the moment, and if key players stay fit and Rodgers rotates wisely, we could be set for a repeat of the Class of 2001’s heroics 14 years ago.