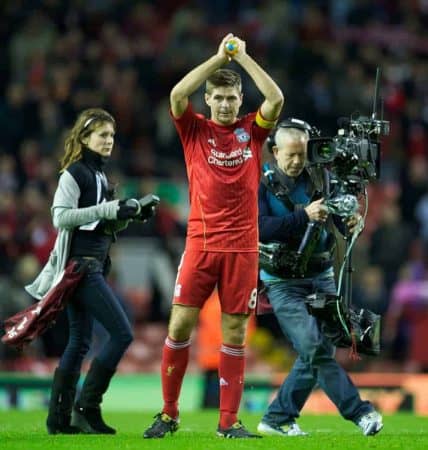 A second-tier competition it may be, but the UEFA Cup / Europa League has always been part of our great European history, writes Simon Collings.

Memorable victories for the Reds in 1973 and 1976 began an era of dominance on the continent, as four European Cups followed. This natural progression of success seemed to continue with the turn of the millennium, as victory in 2001 was then also followed by Istanbul.

It seems Liverpool have had a connection with Europe’s secondary cup competition – success in one, inevitably leads to success in the other.

For this reason alone I believe we should take this year’s participation seriously – as it could pay dividends for Brendan Rodgers in the future.

A good run this time around would certainly allow the likes of Raheem Sterling and Philippe Coutinho to gain valuable experience. Steven Gerrard aside, we desperately lack playing time on the continent – as this year’s Champions League group stage painfully highlighted.

There are still some decent sides left in the competition – including Tottenham and Everton – but a semi-final appearance could be possible. Besiktas will be tricky opponents, but if Rodgers really focussed on it we could be looking at some memorable encounters along the way.

However, since its inception in 1971, which moments have stood out? Which games or goals still have the Kop talking? Let’s take a look…

In what was a pulsating night at Anfield, Liverpool’s 3-2 victory over the Belgian outfit is up there with the likes of St. Etienne in 1977 and Olympiacos 2005. Going 2-0 down, the reds fought back in a seven-minute onslaught in front of the kop – giving the reds the edge ahead of the return leg.

Ray Kennedy got the first with a sweet left-foot strike from the edge of the box, Jimmy Case bobbled in a second, and then Kevin Keegan tucked away the third from the spot.

Keegan’s vital equaliser over in Belgium swung the two-legged final further in Liverpool’s favour, yet it was that second half response which inevitably won us our second title. As a consequence, this result begun a series of great comebacks over the coming years; making the kop even more notorious throughout the continent.

After a six year ban from European competition, Liverpool entered the UEFA Cup with something to prove. Dispatching with ease Finnish side Kuusysi Lahti in the first round, French outfit Auxerre were the reds’ first major test.

Losing the first leg 2-0, Liverpool were left with an uphill struggle as their long absence away from the continent seemed all the more apparent.

However, goals from Jan Molby, Mike Marsh, and Mark Walters ensured a memorable Liverpool comeback – evoking memories gone by. Liverpool eventually lost in the latter stages to Genoa but the significance of being back competing on a European stage was all the more important. A new chapter in Liverpool’s European history was being written.

Although the 1990’s was a painful decade for Liverpool supporters (at home and abroad), there were still some moments to savour. Steve McManaman’s wonder goal at Celtic Park was one of them.

In the dying minutes, and 2-1 down, Macca picked up the ball deep in his own half and glided towards goal. As he rode a few tired challenges the Celtic defence opened up and he placed a beautifully curled shot in off the post.

In what was a fantastic European tie, the return leg at Anfield was a bit of a let-down. McManaman’s late goal in Glasgow however, ensured a safe passage through to the next round.

At the time, this was the biggest game for Liverpool in a long while. Not since 1985 had a European tie had so much riding on it – as a straightforward victory over the Catalan giants would put the reds into their first final in sixteen years.
After a hard-fought 0-0 draw in the Nou Camp, Gerard Houllier’s side knew what had to be done, and a Gary McAllister penalty saw us home. With the great Rivaldo in their ranks, Barca at times looked shell-shocked as the kop was in full voice.
Phil Thompson’s reaction at the final whistle said it all, as Liverpool were back once again in a European final.

Since the Europa League re-formed, Liverpool have not had much to shout about in recent years. A semi-final appearance against Athletico Madrid in 2010 was perhaps a decent achievement. Yet the following season in the group stage, Steven Gerrard came off the bench against Napoli and turned what was a seemingly dour team performance into a one-man show.
As soon as Gerrard entered the fray the Italians couldn’t cope with his power and aggression – they looked terrified. He guided Liverpool to a 3-1 victory, taking home the match-ball.

This was one of Roy Hodgson’s better nights in charge at Liverpool, yet it was solely down to captain-fantastic once again that saw us through! Oh how Liverpool will miss him!