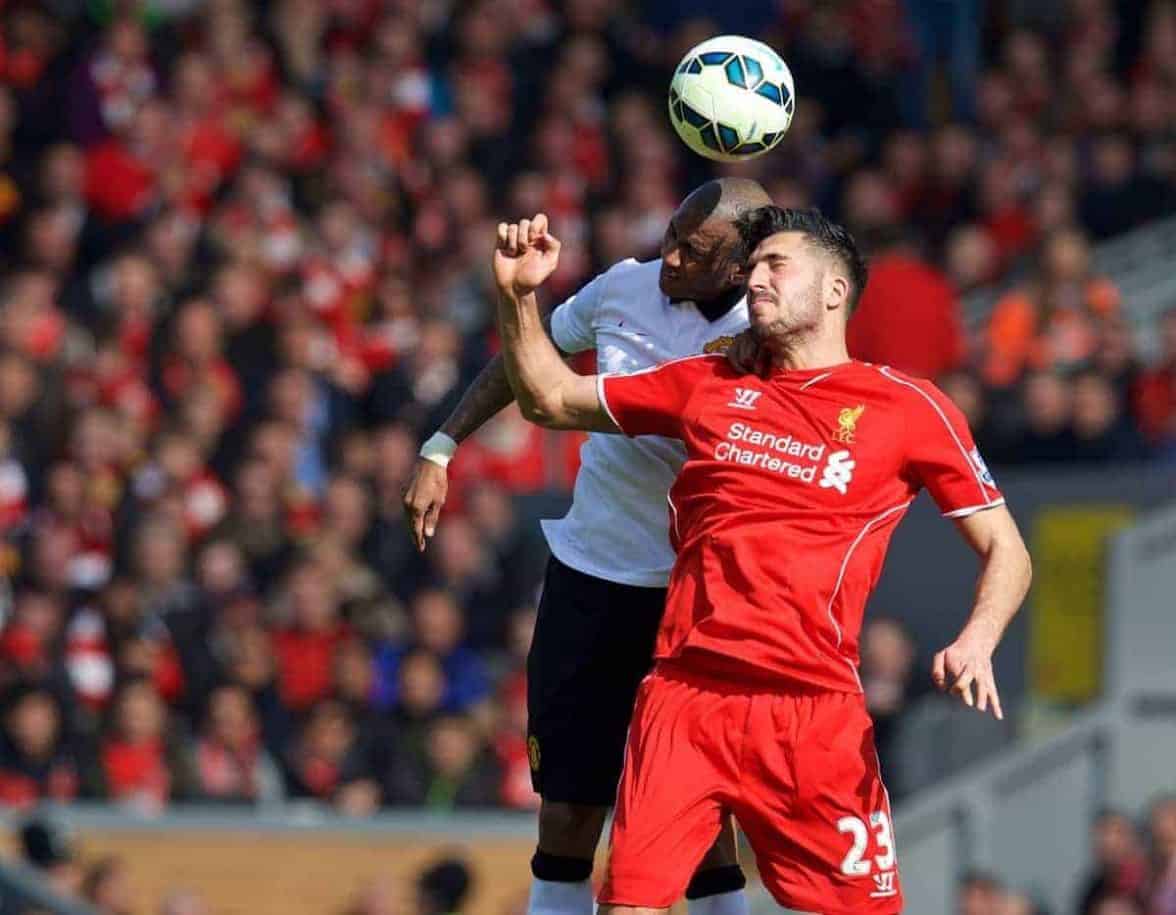 After so much build-up to the game, in which many were tipping the Reds to leapfrog Louis van Gaal’s side into fourth place, they simply didn’t show up on the day.

The first-half was absolutely lifeless, and United were deserving of their lead given to them by the excellent Juan Mata.

Steven Gerrard’s foolish sending off, just seconds after coming on, was a disastrous moment in the game, and Mata’s second effectively ended the match as a contest.

Although Daniel Sturridge‘s goal midway through the second-half gave Brendan Rodgers’ side some hope, it didn’t prove to be enough.

Wayne Rooney’s late missed penalty was one of the rare moments of enjoyment for the home faithful, on a damaging afternoon on Merseyside.

Here are five discussion points from the game:

Having been unsurprisingly left out of Liverpool’s starting eleven, given the brilliant recent form of Jordan Henderson and Joe Allen, Gerrard was introduced following the aforementioned insipid opening 45 minutes.

The 34-year-old is a proud man, and one who has played on the edge throughout his career, and he was clearly desperate to make an impact in his final game against United. That desperation proved fatal.

Having immediately flown into a typically robust challenge on Mata, which sprung the Anfield crowd into life, he was then caught late by Ander Herrara seconds later.

The skipper reacted to the challenge with a petulant stamp on the Spaniard, and was duly sent-off by Martin Atkinson. He hadn’t even been on the pitch for one minute.

It was a moment that even the most ardent Gerrard-lover could defend, and it played a huge part in his side’s eventual defeat.

When he does finally depart this summer, there will be so much that we miss about arguably Liverpool’s greatest ever player. Moments like this miss will not be one of them though.

“It would be an absolute honour to be captain. I’d love it,” Jordan Henderson told Henry Winter in a recent interview with the Daily Telegraph. On Sunday, he once again showed why Rodgers would be mad not to make him Gerrard’s long-term replacement in the role.

Admittedly, it may not have been one of Henderson’s finest games in a Liverpool shirt in a technical sense- he and Joe Allen struggled to boss the midfield battle for large periods- but his effort levels and team ethic in the second-half were commendable.

While heads began to drop around him with the score at 2-0, and some fearing the Reds could be on the wrong end of a hiding, the 24-year-old never stopped running. He was the catalyst behind a spirited second-half fightback.

'It would be an honour to take over from Steven Gerrard' – @henrywinter meets Jordan Henderson http://t.co/KbAeX9jvam pic.twitter.com/kww51zQ3SH

At times his surging box-to-box runs were reminiscent of Gerrard in his pomp, and he was more effective than any of his teammates the more the match went on.

Henderson’s statistics in the game may look fairly bleak- a 64 per cent passing accuracy is nothing to write home about- but he showed what huge character he has, and came to the fore when Liverpool were at their most vulnerable.

There will always be some Liverpool supporters who don’t fully appreciate the excellence of Sakho- the ‘he’s rubbish on the ball’ brigade mainly- but he was superb against United, and his side’s standout player.

The Reds’ ball retention was appalling throughout the first-half, with Emre Can, Raheem Sterling, Allen and Henderson all culpable, among numerous others.

Sakho was excellent in that area, however, using the ball both intelligently and effectively time and time again. His enjoyed a pass completion rate of 89 per cent, and made eight defensive actions during the game.

Well done to Mamadou Sakho today, when all players lost the head and kept hoofing he stayed calm and composed. Our best player.

Almost every time he was faced with a one-on-one battle he came out on top, and he played with a leadership that outlined exactly why he captained Paris Saint-Germain at the age of just 19.

The Frenchman’s gangly style will always make him look somewhat unbalanced in possession, but anybody who still believes he is a liability is simply not looking hard enough.

It’s easy to forget that Sakho has only just turned 25, and assuming he remains a Liverpool player for the foreseeable future, he can go on to be a great defender for the club.

While some of Rodgers’ summer signings have been success stories (Can) and others have been undeniable failures (Mario Balotelli and Rickie Lambert), Moreno is one who has blown hot and cold. He was very much the latter against United, sadly.

The 22-year-old is still a very raw footballer, and he showcased all of the frustrating elements to his game during 65 hugely disappointing minutes on Sunday.

Time and time again he surrendered possession in the first-half, and you could feel the frustration mounting among the home supporters the more it occurred.

Alberto Moreno's 1st half by numbers:

He put teammates under necessary pressure several times, and on one occasion conceded a typically needless foul having tried to atone for his earlier error.

Moreno won just a quarter of his average duels against United players, and his poor positional sense was highlighted for both of Mata’s well-taken goals. Too often he switches off, and his gung-ho style is not ideal for a wing-back.

There is plenty of potential in the young Spanish left-back, but on an afternoon when calm heads and solid performances were needed, he failed spectacularly.

Although there is great potential in Philippe Coutinho, Sterling, Can and many others, Liverpool’s lack of experience proved costly against their great rivals.

Season-defining matches like these can so often come down to being ruthless and solid, and in fairness to Van Gaal’s United side, their know-how of getting through games of this magnitude is deserving of respect.

When you look throughout their team it is brimming with experienced internationals, from Daley Blind and Antonio Valencia at the back, Michael Carrick in midfield to Rooney up front. These players have been there and done it time and time again.

The same cannot be said of Liverpool, barring a few ‘over 25s’ in their team, and at times it looked as though Rodgers’ young team froze in the same way they did against Chelsea last season.

United were rock solid in everything they did from start to finish, whereas the Reds misplaced countless passes, conceded needless fouls and generally looked as though the occasion got to them.

It was ironic that the most experienced player at the whole club proved to be the villain on the day, but Gerrard’s young teammates still have plenty of growing up to do. They will all learn from games like this.

Next up for Liverpool is a trip to Arsenal on 4th April. A defeat in that game would surely end their top-four hopes. Let us know your thoughts on the United defeat in the comments below.

All statistics via Squawka.