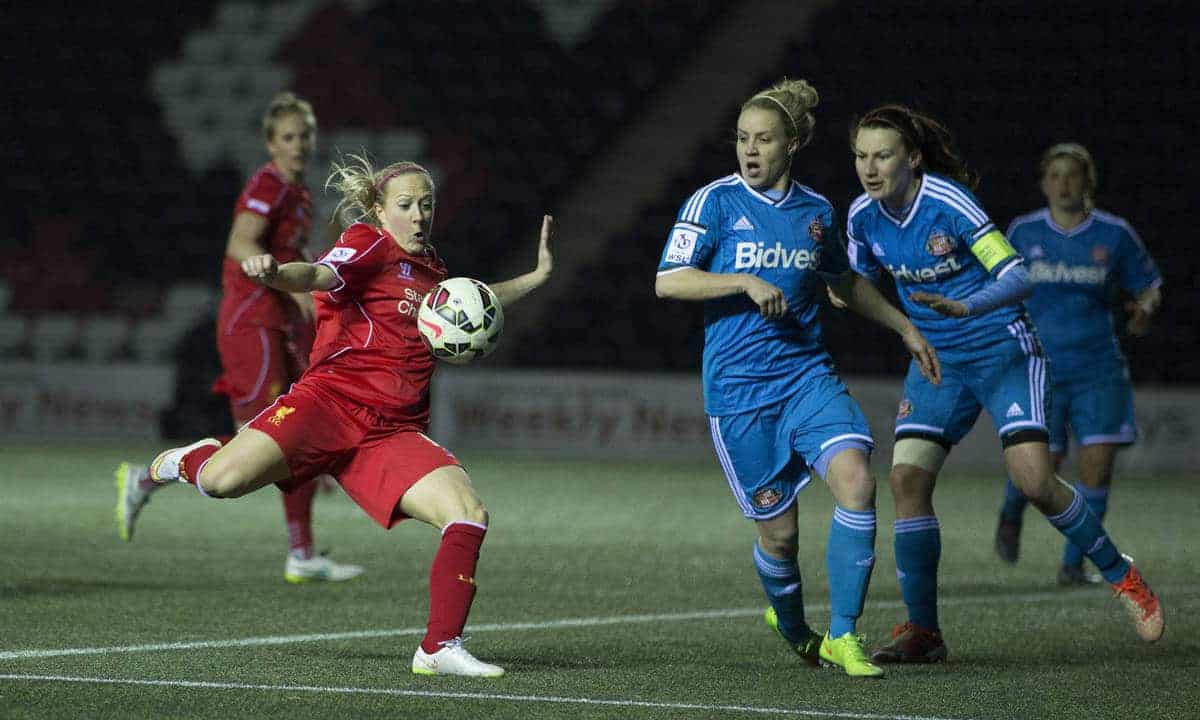 Heather Carroll provides her monthly round up on the Liverpool FC Ladies, who kicked off their new season in March – but not quite in the manner expected.

Liverpool Ladies began the defence of their second successive league title this month, unfortunately falling to a 2-1 home defeat to newly promoted Sunderland Ladies just days after being knocked out of The FA Cup away at Birmingham City.

With four new signings who are completely new to the Women’s Super League, the team needs perhaps just a little more time to take shape but has received a welcome boost in the return of Lucy Staniforth from a 22-month injury absence.

Opening up the campaign with a tough fifth round FA Cup tie away at Birmingham City, the club who finished just one point behind Liverpool in the league last season, the Reds fell behind after Birmingham captain Jade Moore slipped behind the defence to open the scoring.

Following the opener Liverpool rallied, Fara Williams urging her team mates forward and they were soon rewarded with an equaliser; Gemma Bonner sending the ball forward from a free kick deep in her own half, Line Smorsgard keeping it in at the corner flag, beating her marker to tee up Corina Schroder for a cross that met the head of Natasha Dowie.

At 1-1 Birmingham’s Chelsea Weston went down off the ball, requiring extended treatment on the pitch for a suspected ACL injury. When play resumed Jo Potter put the home side back in front with an excellent free kick that gave Libby Stout no chance in the Liverpool goal.

The second half would prove to be a frustrating one for Liverpool, Asisat Oshoala looked to be pulled down in the penalty area with nothing given before Satara Murray fouled new Birmingham striker Freda Ayisi in the Reds 18-yard box. Remi Allen stepped up on the stroke of full-time to slot home her penalty, despite Stout getting a hand to the spot kick.

Finishing 3-1 to Birmingham who deservedly head into the next round it was disappointing to exit the cup so early on, especially with The FA recently confirming that the final will be held at Wembley Stadium for the first time.

Matt Beard made 4 changes to his starting 11 and also changed his formation, going 3 at the back with Martha Harris and Ingrid Ryland both coming in as wing-backs.

Unfortunately the Reds once again fell behind; Sunderland pressing high up the pitch, particularly on the right of the pitch and restricting Harris from getting forward. Sunderland‘s Keira Ramshaw swung a cross in from the right, running parallel to the 6-yard box and being headed into the back of the net by England youth international Beth Mead.

Mead caused all kinds of problems on her top flight debut, drawing a second half foul from Satara Murray in the area for ex-Everton midfielder Brooke Chaplen to put an impressive penalty into the top corner to make it 2-0.

Shortly before the second Sunderland goal, Liverpool had gone agonisingly close to drawing level. Fara Williams’ free kick headed twice against the crossbar by Natasha Dowie and Lucy Staniforth, who made her competitive debut for the Reds on her return from two successive ACL injuries.

Liverpool did pull a goal back, Line Smorsgard nudging the ball into the path of Murray to score from a corner but the Reds couldn’t find a second and the game finished 2-1 to Sunderland.

Mark Sampson announced his England squad for the senior team’s final pre-World Cup friendly yesterday, Gemma Bonner and Fara Williams both named along with the welcome return of Natasha Dowie.

England will take on China at Manchester City‘s new 7,000 seater Academy Stadium next Thursday 9th April. Kick off is at 7:30pm, with tickets priced at £5 for adults, £2.50 concessions and is the final chance to see the international side in action before they head off to Canada this summer. It is also the first England game to be played in the North West for quite some time, with most recent games being played at Milton Keynes and Hartlepool.

Wales also have a couple of international friendlies next week taking place in Bangor, they play Slovakia on Monday 6th April at 3pm and Wednesday 8th April at 7pm. Liverpool’s Emilie Revitt has received a call-up to the squad and could be in line to make her international debut. Revitt has enjoyed a fine season for the Development Squad and recently made her first team debut, starting the pre-season friendly at home to Doncaster Belles.

Liverpool Ladies have three crucial games coming up in April, starting tomorrow – Wednesday 1st April – at home in the league to Birmingham City. The Reds will be hoping for revenge following the cup exit last weekend.

The Reds also face a tough away trip to Chelsea Ladies on Sunday 19th April, the side who Liverpool pipped to the title on goal difference last season and who have acquired former Liverpool winger Gemma Davison during the off-season, before Manchester City pay them a visit a week later on Sunday 26th April.

All Liverpool Ladies home games are priced at just £5 for adults and £2.50 for concessions with tickets available on the gate or online. The Reds play at Select Security Stadium, Widnes and free entry is also granted to anyone in possession of an Anfield season ticket.