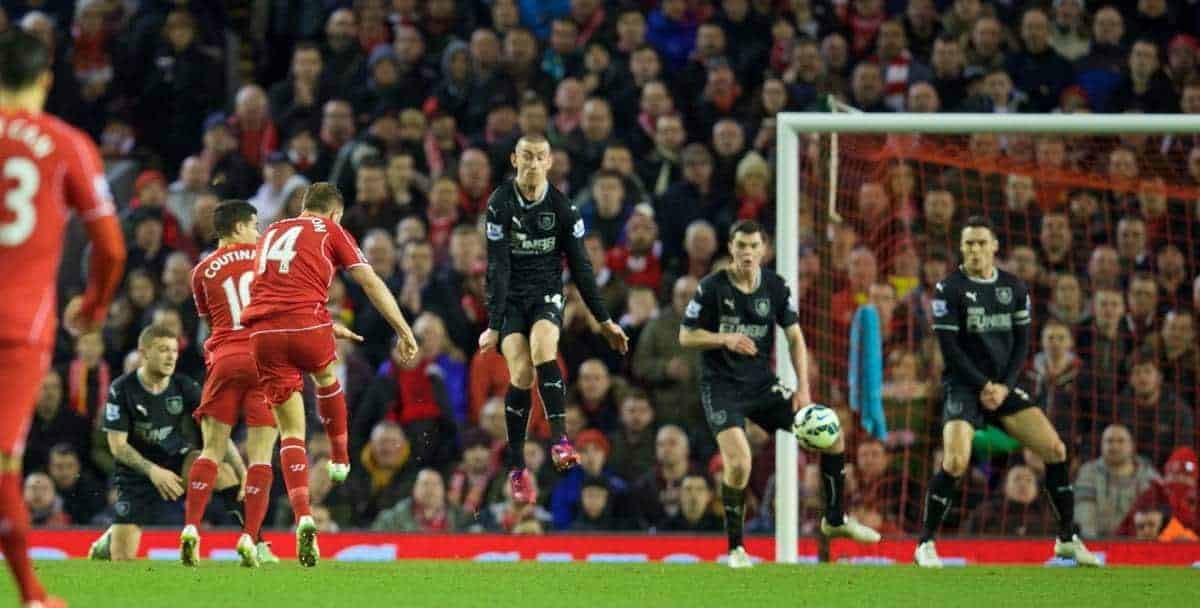 Liverpool beat Burnley 2-0 on Wednesday evening, as goals from Jordan Henderson and Daniel Sturridge earned Brendan Rodgers’ side all three points at Anfield.

Rodgers made just one change from the team that beat Manchester City 2-1 on Sunday, as Liverpool looked to consolidate that win with three points against Burnley.

Sturridge came in for Lazar Markovic, with Raheem Sterling occupying the Serb’s right wing-back role. It was an extremely attacking line-up.

Sturridge almost scored within seconds of the kick-off, having linked up well with Sterling, but was thwarted expertly by Tom Heaton.

The Reds looked full of zip in the opening exchanges, highlighting their confidence right now, but Sean Dyche’s side carried an element of threat on the break.

Henderson tested Heaton from the edge of the box in the 24th minute, while Sturridge almost stole in after an under-cooked header back from Michael Keane.

Four minutes later it was 1-0 though, and it was another tremendous strike from Henderson. The 24-year-old thundered home a superb half-volley in front of the Kop, not dissimilar to Steven Gerrard’s against Olympiakos all those years ago. Rodgers’ side’s dominance had paid off.

Philippe Coutinho almost added to his recent stunning strikes against Bolton, Southampton and City, but his effort curled inches wide.

The impressive Heaton made a great stop to deny Sturridge just before half-time, and it was Henderson’s fabulous goal that separated the two sides at the break.

Six minutes into the second-half Liverpool’s lead was doubled. A superb ball by Henderson found the below-par Sturridge, and the 25-year-old finished clinically at the Anfield Road end.

Reported Reds target Danny Ings was a little unfortunate not to get a penalty after a tug by Henderson, and Ashley Barnes shot just wide soon after.

The game meandered towards its conclusion in the end, as Liverpool gained three comfortable points in their quest for a top-four finish. It’s now nine league wins in their last 11 games.