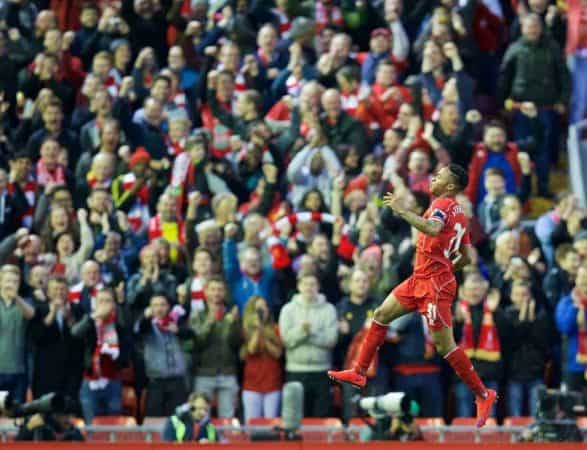 Jordan Henderson picked out a surging Raheem Sterling with a delectable ball across the 18 yard box. Sterling collected it with one delicate touch, slipped by one marker, and another, before beating Tim Krul at the far post with a sublime curled finish. The goal put the Reds ahead on Monday night inside of ten minutes against a struggling Newcastle United side.

It was a moment of unbridled brilliance that reminded the world why Sterling is considered one of the best young talents in Europe. Making something from nothing takes a unique skillset, one which Sterling clearly possesses. He has the pace, trickery and confidence to take on any defender in the world and hold his own. It’s because of this potent skillset that contract negotiations have stalled between club and player. There was no question Sterling was the most threatening player on the pitch in the first half alongside Philippe Coutinho.

While they are two of the smallest players on the field at any given time, the two young Liverpool starlets were putting on a show against a clearly beleaguered Magpie defense. They had no trouble linking up to create some breathtaking moments of skill that left the crowd “ooing” and “awing” in approval. It was as if Sterling had taken all the criticism he’s received off the field over recent weeks and channeled it into a burning desire to wreak endless havoc on anybody brave enough to stand in his way.

Following thirty-five minutes of scintillating football from the lads in Red, it seemed inevitable that the goals would flow, and Sterling was going to be at the head of the scoring charge. As it were, that was not the case. Unfortunately for Liverpool fans and manager Brendan Rodgers, this is the frustrating side of not only this team as a whole, but Sterling in particular.

As talented as he no doubt is, at twenty-years of age, he still has maturing to do in his game. He should have doubled his goal tally just before the hour mark when a deflected Henderson cross fell at his feet 7 yards from goal one-on-one with Krul, but the England International somehow managed to put the ball wide left of goal. At the very least, the keeper needs to be worked from that position, regardless of who the player is. It also brought to the forefront two glaring issues in his game, the lack of an effective left foot and a shortage of composure in front of goal.

He spurned one more clear-cut chance before the night was out when yet another superb Henderson cross reached him unmarked at the far post only to see the youngster sky it into the Kop. In his defense, there was a lot of pace on the ball, and it was asking a lot to redirect it with any semblance of confidence. That would be more in line with a reactionary finish as opposed to pure technical skill. But that is being awfully generous to the bloke.

His opening goal was his seventh Premier League goal of the season, which leads the club. However, how many goals has he left on the field due to a lack of technical ability or composed finishing? That is what makes it so frustrating to follow Sterling as a footballer. You see the immense potential at his disposal; alas we are only treated to brief glimpses of what he could be for this club. If he can get his head on straight both on and off the field, there is no telling how high he can go.

Monday night was a chance for Raheem Sterling to generate some positive momentum for himself with a strong showing. He wasn’t the Man of the Match (That was Henderson or Coutinho for me) and even though he scored a sensational goal, it could’ve been so much more. As a result, the naysayers will still point to wasted opportunity and immaturity as a reason he is not worth the wages he has demanded.

Now the best thing for him to do is to build on this performance and string together a handful of strong appearances. Perhaps bag a few more goals before the season is out. If he can do that, and stay out of trouble in his personal life, the contract situation will resolve itself and he will have that Kop song he covets so much (and not one that’s more about his agent).