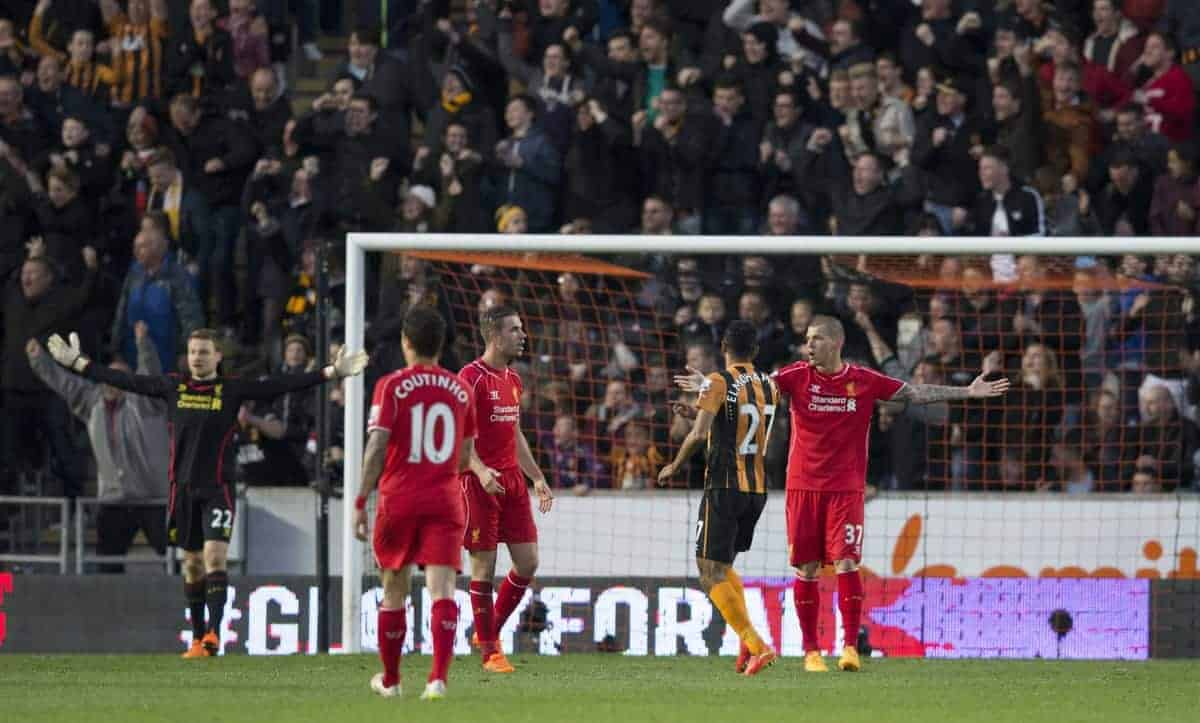 Liverpool succumbed to a 1-0 defeat to Hull City on Tuesday evening, as their season continues to completely peter out.

Liverpool made the trip to the KC Stadium knowing that anything other than victory against Steve Bruce’s side would keep their extremely slim top-four hopes alive.

There was just one change from the side that drew 0-0 with West Brom on Saturday, with Steven Gerrard not in the squad and Joe Allen coming in for the captain.

Mario Balotelli continued to lead the line in a 4-3-3 formation, with Raheem Sterling and Jordon Ibe offering width. Glen Johnson kept his place at left-back, which seemed rather bemusing.

Simon Mignolet made a decent early save to deny Dame N’Doye, while at the other end Steve Harper reacted well to a Philippe Coutinho strike.

Balotelli attempted an outrageous back-heeled effort after 24 minutes, but his effort went straight at Harper. The in-form Mignolet then produced a great double save after good work by Robbie Brady.

Hull were ahead eight minutes before half-time, as Michael Dawson glanced home a terrific header. The Englishman looked a mile offside, but Balotelli had played him on.

Jordan Henderson tested Harper just before the break, and Balotelli couldn’t convert from close-range after good work by Johnson. Dawson’s goal was the difference at the interval.

Liverpool struggled to make any inroads at the start of the second-half, on what was becoming an increasingly frustrating night for Brendan Rodgers’ side.

Henderson almost equalised after the hour-mark but was denied by the impressive Harper, but it was a rare chance in what was a very flat performance. With 20 minutes left they needed something special.

The Reds’ captain on the night was trying more than most, but his shot from the edge of the box was again kept out by Harper after 72 minutes.

Martin Skrtel almost scored an own goal shortly after, by which point Adam Lallana, Rickie Lambert and Lazar Markovic had all been introduced.

The equaliser simply wouldn’t come though, let alone the two needed for victory, as Liverpool’s wretched run of form shows little sign of going away. The curse of the KC strikes again.