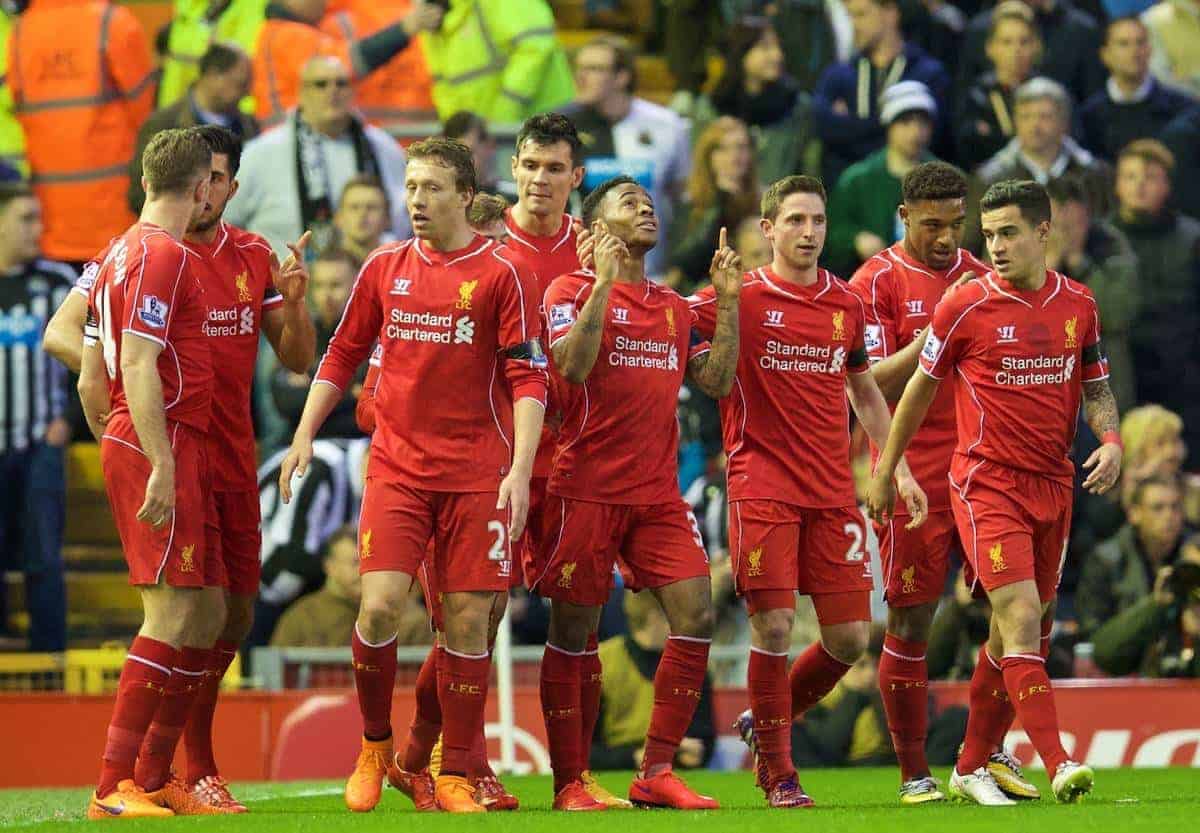 As his defence seemed to crumble in front of him in the second half, Simon Mignolet maintained his composure and made some sublime saves to keep Newcastle at bay, including a full-stretch stop to divert Ayoze Perez’s goal-bound looping header behind.

With his 13th clean sheet of the season, Mignolet deservedly remains in position to challenge for the Premier League‘s Golden Glove award.

Despite helping to support the attack well on occasion, and a comfortable opening 45 minutes, Glen Johnson’s defensive contribution in the second half underlines just why he is likely to depart from Merseyside at the end of the season.

Partnering Dejan Lovren at centre-back, Emre Can had a relatively quiet game in terms of defensive contribution, but was slightly more accomplished than the duo flanking him.

Can supported well in attack, supplying a well-crafted cross that eventually set up Joe Allen’s goal in the second half, after combining well with Raheem Sterling.

On par with Johnson in terms of defensive calamity, Lovren’s second half nullified a lot of positive work he contributed in the previous 45, as his confidence and composure visibly drained with each Newcastle attack.

Lovren was very lucky not to concede a penalty after his wild, mistimed swing brought down Perez in the penalty area in the first half—it was Sunday League stuff from the £20 million centre-back.

After recent failures at left wing-back, perhaps due to the demands of the role, Alberto Moreno seemed to thrive in a more traditional left-back role, bombing forward with regularity to aid Liverpool’s attack and defending diligently when required.

Moreno touched the ball 72 times at Anfield on Monday night—the fourth most of any Liverpool player—and posted the highest passing accuracy of any player, with 92.1 percent.

After struggling to impose himself in the recent defeat to Arsenal, Lucas Leiva returned to form in a defensive midfield role against Newcastle.

Prowling ahead of Lovren and Can when Newcastle were in possession, and dropping between the two when Liverpool had the ball, Lucas made a monstrous 10 successful tackles, breaking up play with well-harnessed aggression.

While Allen provided the final flourish with his well-taken second-half strike, it was the midfielder’s nuanced box-to-box display that deserves the plaudits.

Allen harried and pressed with his typical fervour, but also linked up play exceptionally when Liverpool were on the charge, combining well with Philippe Coutinho on the edge of the Newcastle penalty area.

Much like Allen, Jordan Henderson was crucial in winning the midfield battle for the Reds, particularly in a supremely dominant first half in which the 24-year-old completed 95.2 percent of his passes (dropping to 90.4 percent at full-time) including his assist for Sterling’s opener.

After receiving criticism recently for a pair of shrinking displays when it counted against United and Arsenal, Henderson produced another stellar captain’s performance, once again cementing his play-making credentials.

Described as “sensational” by Brendan Rodgers ahead of Monday night’s clash, Jordon Ibe returned from a six-week layoff and was thrust straight into the starting lineup, and a baying Newcastle side fouled him four times, more than any other player.

Despite operating in a largely peripheral role, Ibe looked dangerous when he was on the ball, always looking to drive at the Newcastle back line with pace.

Liverpool needed an early goal to complement their dominance, and Sterling happily supplied this with a well-taken, placed finish in the first 10 minutes, highlighting just why he should be played in an attacking role.

However, it was a rather hot-and-cold performance for the 20-year-old, who could perhaps have produced more when in possession.

Nevertheless, Sterling restored some of his battered reputation with an energetic display.

While Allen and Henderson set the tone as Liverpool dominated in the first half, it was Coutinho who provided the ingenuity and creativity.

Deployed in an unusual false-nine role, Newcastle struggled to pick up Coutinho’s movement, and the Brazilian thrived.

Coutinho made seven successful dribbles as he tore a weak Newcastle defence apart.

Fabio Borini (on for Ibe, 58′) – 6 – Made some intelligent runs and maintained a useful work rate, but Borini lacked the requisite quality.

Rickie Lambert (on for Sterling, 89′) – Not enough time to make an impact.

Rodgers deserves praise for the way in which he reinvigorated his side tactically after disappointing defeats to Manchester United and Arsenal, and a drab performance against Blackburn Rovers in the FA Cup, with his decision to utilise Coutinho as a false nine proving particularly inspired.

The manager’s influence from the bench was somewhat sullied by a lack of options—having to call upon Borini and Lambert to shake up a forward line can’t be the most appealing of prospects—but he could perhaps have introduced Javier Manquillo for the woeful Johnson.

The midfielder was sent off with a second yellow card, but Mason will be rightly criticised for not producing a straight red.

Who was your Man of the Match as Liverpool defeated Newcastle United 2-0 at Anfield? Let us know in the comments below.