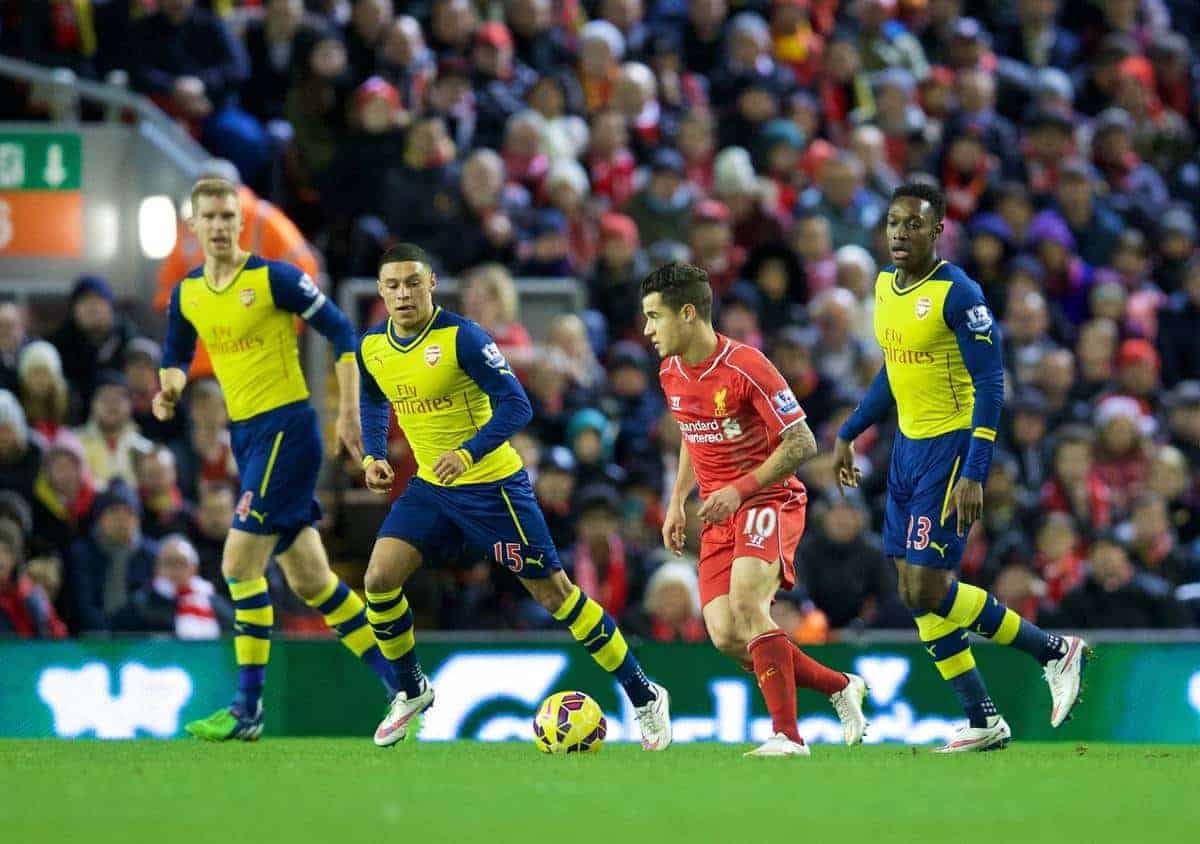 Liverpool visit Arsenal in a pivotal Premier League clash at the Emirates on Saturday lunchtime. Henry Jackson selects his combined XI between the two sides based only on their 2014/15 form.

This weekend’s showdown in north London is likely to prove vital in the race for a top-four finish, with a defeat for the Reds surely the final nail in their Champions League coffin.

Both sides have enjoyed up and down seasons, with Liverpool recovering from a horrendous start and Arsenal enjoying their annual strong finish after a trademark blip.

There have been numerous players on either team who have shone throughout 2014/15, but who gets into a Combined XI? Here is ours, based entirely on this season’s form (an admittedly narrow and flawed 3-4-3 diamond formation):

Having suffered a miserable time of things up until Christmas, in which he was dropped for Brad Jones, Mignolet has been superb in 2015.

The Belgian is on course to win the Golden Glove award, and his combination of good decision-making and outstanding shot-stopping have been a big reason for Liverpool’s improved form.

Wojciech Szczesny is a talented goalkeeper but makes too many mistakes, while David Ospina has also impressed and flattered to deceive in equal measure.

There can be no doubting that Koscielny is both one of the best centre-backs in the Premier League and one of Arsenal‘s most important players.

The France international is the rock that holds the Gunners’ defence together, and he has very few flaws in his game. He was missed greatly during the 2-2 draw at Anfield in December, in which Arsenal were run ragged at times.

Per Mertesacker has struggled for consistency since his triumph at last summer’s World Cup, while new signing Gabriel has barely featured since his January move to the Emirates.

Like Mignolet, Skrtel has got better and better the more the season has progressed, and he is now a genuine contender for the club’s Player of the Year award.

The 30-year-old has thrived in a back-three, winning 63 per cent of his duels, and has shown his underrated quality on the ball with a 90 per cent passing accuracy. He’s not everyone’s favourite, but even his biggest detractors cannot deny how impressive he has been.

Sakho is one of the most harshly, and incorrectly, criticised defenders in the league at present. Lazy critics claim he can’t pass the ball, but his 89 per cent passing accuracy would suggest otherwise.

His use of the ball is fantastic a lot of the time, he is dominant aerially and not many opponents get the better of him. The Reds have a real class act on their hands.

It’s worth stressing that this formation doesn’t really cater towards full-backs, but Hector Bellerin, Nacho Monreal and Kieran Gibbs have all impressed for Arsenal. Alberto Moreno, meanwhile, has shown enough to suggest he will be a good signing for Liverpool in the coming years. Yes, Can has predominantly played in defence this season, and excelled, but his long-term role remains in the centre of midfield. The 21-year-old is a player with enormous potential, and has been Brendan Rodgers’ best signing of last summer by a mile.

He is strong, skilful, creative and consistent, and if he continues to progress at the rate he is, he could become one of the most dominant midfielders in Europe.

Lucas Leiva and Joe Allen have both shone at different times, while Francis Coquelin has done very well sitting in front of Arsenal‘s back four.

Henderson is fully expected to replace Steven Gerrard as Liverpool captain in the summer, and he has shown this season why he is the right man for the job.

The England international hasn’t always been at his very best, but his supreme work-rate and never-say-die attitude have been admirable. Six goals and seven assists is a very respectable return, and shows that he is far more than just a worker in the middle of the park.

Aaron Ramsey has not hit the heights of last season, partly due to injury, but remains a top class player when in full flow. Steven Gerrard, Mikel Arteta and Mathieu Flamini have all been inconsistent when they’ve featured.

Cazorla is a fabulous footballer, and is enjoying arguably his finest season in an Arsenal shirt since moving from Malaga in 2012.

Spain’s two-time European Championship winner has run the show time and time again for his side, showing dazzling feet, terrific creativity and an eye for goal. Seven goals and 10 assists in all competitions outlines his influence.

Coutinho has been absolutely magical at times this season, and has been Liverpool’s standout player after a slightly below-par first few months.

The brilliant Brazilian has scored sensational goals against Bolton, Southampton and Manchester City, and his general touch and vision is on another level to virtually any other Reds player.

Mesut Ozil is an extremely talented player, but although he’s been more effective than some of his detractors will claim- he is a statistics-obsessed fan’s dream- he is still nowhere near the player he was at Real Madrid.

Sterling isn’t exactly Mr Popular right now, given his current contract issues, but he has been one of the Reds’ most important players in 2014/15.

It’s very easy to take the 20-year-old for granted and assume he hasn’t been that impressive, but he has scored more goals (10) and provided more assists (8) than any other Liverpool star this season. He was particularly good as a lone striker, in a gamble that paid off handsomely for Rodgers.

Sanchez made a sensational start to life at Arsenal, and for a while looked like he may even be as influential as Luis Suarez was for Liverpool last season.

Although the Chilean’s form has dipped a little in recent months, he has still scored 19 goals and shown that he is a world-class footballer with magnificent attitude.

The likes of Danny Welbeck and Alex Oxlade-Chamberlain have not exactly set the world alight for Arsene Wenger’s team, and the same can be said of Adam Lallana since his big-money move to Anfield.

Having been something of a laughing stock with rival fans over the years, Giroud has silenced the doubters and scored 17 times in just 26 matches.

The 28-year-old has an underrated touch and is a strong physical presence, and despite the fact he can sometimes go missing in the big games, he has been a very important player for Arsenal.

Mario Balotelli, Rickie Lambert and Fabio Borini have all been poor, while Daniel Sturridge has looked rusty since missing six months of action.

All statistics via Squawka and WhoScored

Who would make your Liverpool and Arsenal combined XI, based on this season’s form? Let us know in the comments below.