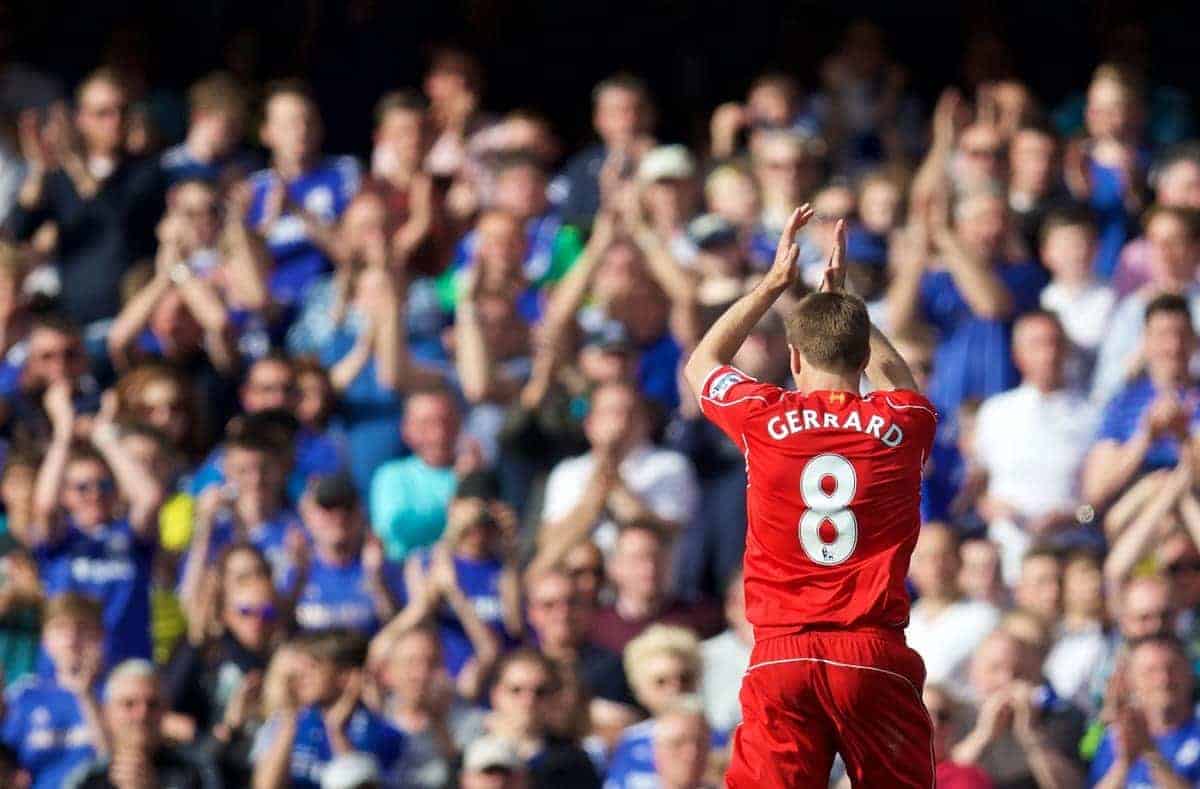 Following Liverpool’s hard-fought 1-1 draw with Chelsea on Sunday, we take a look at the best of the newspaper reaction from the game.

It was a strange match in many ways, with Chelsea clearly not 100 per cent at the races and Liverpool not quite going gung-ho enough in a game they had to win.

The Reds performed pretty well though, and responded impressively from John Terry’s early header. At that point you couldn’t help but fear the worst for Brendan Rodgers’ side.

Steven Gerrard’s equaliser before half-time kept Liverpool’s faint Champions League hopes alive, but they never quite did enough in the second-half to merit all three points.

In many ways, the match summed up the Reds’ entire season. They looked good in fits and starts, but their finishing and final ball proved to be a weak-link time and time again.

Gerrard’s reception from a decent chunk of Chelsea supporters was refreshing to see when he was substituted late in the day, as the legendary skipper left the Stamford Bridge pitch for the last time.

Unsurprisingly, much of the post-match focus was on the 34-year-old, whether it be his performance, touching send-off or entertaining post-match interview:

Steven Gerrard hit Chelsea with a header during the match and a volley after it. Presented with an opportunity to commend Chelsea fans for their standing ovation as his farewell tour took in an otherwise bilious Bridge, Liverpool’s captain responded by lambasting them for their abusive songs and “Caution – slip hazard” laminated placards about him.

He could have been diplomatic and decorous, could have been polite and thanked his hosts for the momentary cessation of hostilities but the Huyton kid in him came out fighting. “Chelsea fans have shown me respect for a couple of seconds but slaughtered me all day,” he told Sky. “It was nice of them to turn up for once today”. Ouch.

The 185th goal of Steven Gerrard’s Liverpool career was not one to put alongside all those last-gasp game-changers or trophy-clinching interventions of old, but it was at least one last reminder of just how much he will be missed at the club he has served for so long.

As Brendan Rodgers pointed out afterwards, his skipper has scored the important goals in both Liverpool’s previous games and now has just two more matches in the red No 8 shirt before he calls it a day at the only club of his life. Today was remarkable for the ripple of applause around Stamford Bridge when Gerrard was substituted with 11 minutes left in a stadium that is consumed with baiting the Liverpool captain.

After his late winner against Queens Park Rangers, Steven Gerrard once again took centre stage as his header cancelled out John Terry’s opener.

So much for leaving quietly. The closing weeks of Gerrard’s glittering Anfield career are only serving to reinforce what a glaring void he will leave behind when he heads for Los Angeles Galaxy.

With his 35th birthday on the horizon, he may lack the dynamism he boasted at his peak but he remains a top class performer in a squad desperately lacking genuine attacking quality.

It was nice that Chelsea supporters followed Jose Mourinho’s lead and applauded Gerrard off, but they have taunted him relentlessly since his costly slip at Anfield, this time last year. And it is easier to be magnanimous with the title in the bag.

He (Gerrard) stamped his authority on the game Stamford Bridge, keeping his nerve to convert from close range after some uncharacteristically shaky Chelsea marking. But Gerrard did not even muster a smile, let alone a celebration.

It was the reaction of a man who has ground his way through the final act of his Liverpool career with a grimace rather than a grin.

Fifty Premier League goals in 36 games tells the story of where so much has gone wrong for Liverpool. They have paid a heavy price for their failure to adequately replace Luis Suarez and cover for Sturridge’s fading physiology.

The damning stat that Everton‘s defenders have scored more goals than Liverpool’s strikers will last the season, barring a scoring glut against Crystal Palace next week and at Stoke on the final day.

Brewin’s colleague at ESPN, Dave Usher, was impressed with Philippe Coutinho but critical of Rickie Lambert:

As usual, the Brazilian was the orchestrator of most Liverpool attacks and their liveliest attacker. On several occasions he worked space for himself to get his shot away only to see a defender hurl himself in the way to make a block, but the one time he had a clear sight of goal he found the side netting when he should have hit the target.

(Lambert) simply never got into the game. It wasn’t that he did much wrong, he just barely saw the ball and Liverpool were desperately crying out for some pace to stretch Chelsea‘s defence with darting runs in behind.

He tried to do it on a couple of occasions but just didn’t have the acceleration to latch onto passes from Henderson and Coutinho. Must be incredibly frustrating for him as he never gets any decent crosses to attack which negates a lot of his strengths as a frontman. It was no surprise when he was replaced by youngster Jerome Sinclair.

Dominic Fifield of the Guardian:

For Liverpool, the game is up. An afternoon which had begun with a grudging show of respect for the newly crowned Premier League champions, the visitors lining up along either side of a blue carpet to form a guard of honour as Chelsea trooped triumphantly into the arena, ended with Champions League football effectively out of their reach.

For Rodgers, and the hierarchy at Anfield, a pivotal summer awaits.

Next up for Liverpool is Saturday’s clash with Crystal Palace with Anfield. It is sure to be an emotional occasion, as Gerrard plays his last ever home game for the club.