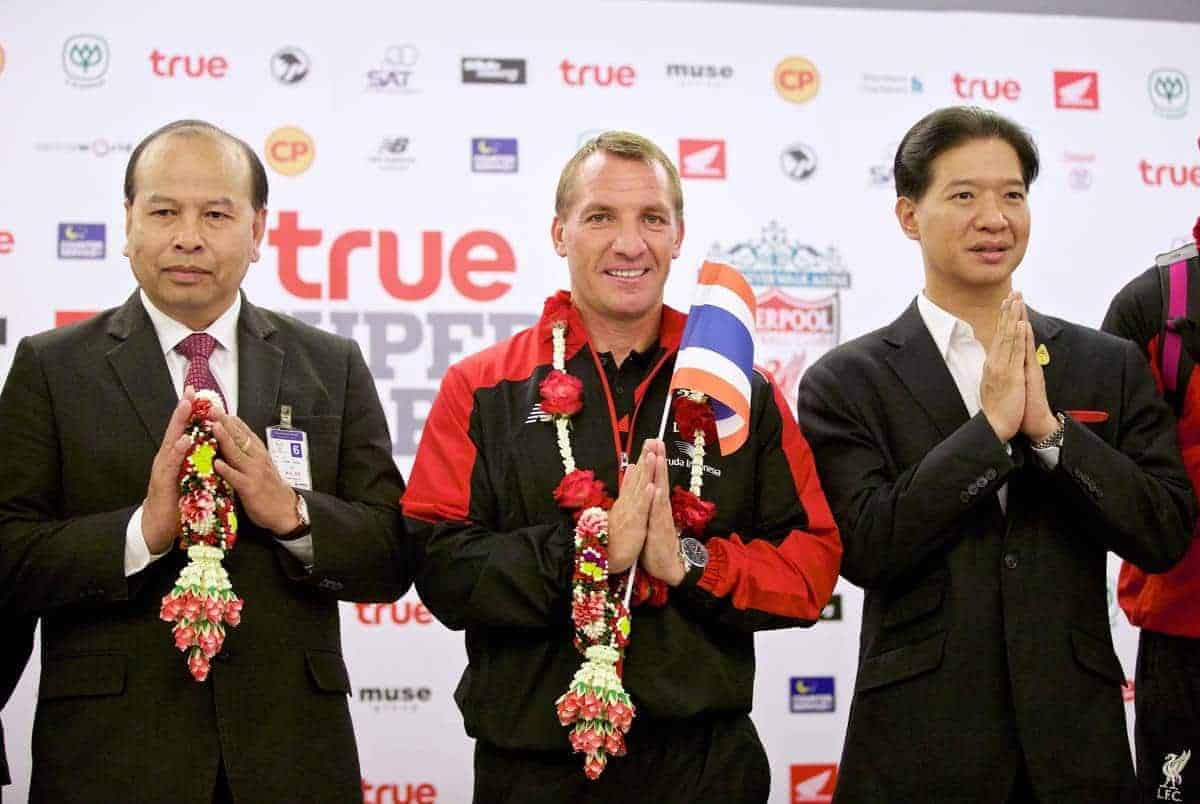 Brendan Rodgers’ Liverpool start their 2015/16 pre-season schedule on Tuesday with their first fixture coming against True Thai All Stars in Bangkok. Liverpool make a long-awaited return to action when they kick off their pre-season tour against True Thai Premier League All Stars in the first of four friendly clashes.

The Reds make the first stop on their travels which will see them play games across Thailand, Australia and Malaysia, before visiting Finland for a fifth and final friendly ahead of opening the Premier League season against Stoke City.

Tuesday’s meeting against the All Stars will be the first time the two sides have met, despite the clash being the fifth time the Reds have played in the Thai capital since 2001.

Liverpool’s current record in Thailand since the turn of the millennium stands at three wins and one draw in the four previous fixtures.

The Reds’ first trip to the country saw them run out 3-1 winners against the Thailand national team thanks to a brace from Michael Owen and a solitary strike from Nicky Barmby.

Rodgers’ side recorded a comfortable 3-0 victory thanks to goals from Philippe Coutinho, Iago Aspas and Steven Gerrard in their last visit in July 2013. The clash will again be held at the Rajamangala Stadium, Bangkok – home of the Thailand national team – which the Reds have played at before, most recently two years ago.

It is a spectacular venue which boasts a capacity of just under 50,000, and every seat is expected to be taken for the visit of Rodgers’ new-look squad.

The All Stars played at the impressive arena in a post-season friendly against Chelsea six weeks ago, where they lost 1-0.

However, last week they held Championship side Reading to a 2-2 draw.

They’ll be looking to go one step further against Rodgers’ men as they strive to become the first Thai team to record victory over Liverpool. Brendan Rodgers will be assisted by his new-look background team including new assistant manager Sean O’Driscoll and Gary McAllister, and the Liverpool boss initially named a squad of 30 for the tour.

Five of the Reds’ six new signings are included though Roberto Firmino misses out having been granted an extended break following Copa America involvement.

Jose Enrique, Fabio Borini and Mario Balotelli are all left at Melwood as they edge closer to the Anfield exit door.

Raheem Sterling will not travel on the tour and as the wantaway 20-year-old closes in on a reported £49million move to Manchester City.

Game time could also be handed to forgotten first-teamers looking to impress such as Andre Wisdom and Joao Carlos Teixeira.

Academy graduates Jordan Rossiter, Pedro Chirivella, Ryan Kent, Sheyi Ojo and Harry Wilson will all be hopeful of putting themselves in Rodgers’ thoughts for new the season. Though the decision over who will be vice-captain is yet to be announced, newly appointed skipper Jordan Henderson will enjoy his first experience as Liverpool’s full-time captain.

As always with early pre-season matches, the primary aim is to get the squad back to full fitness and match sharpness. It is almost certain that Rodgers will field a different XI in each half of the game.

Rodgers could line his side up in a 4-3-3 formation with recent reports having indicated the shape will become his first-choice option, though with plenty of midfield and attacking options available, the Reds boss could decide to utilise a 4-2-3-1 or 4-4-2 diamond system.

The match will kick off at 2pm UK time (8pm local time), and along with all other pre-season games, will be shown live on LFCTV.