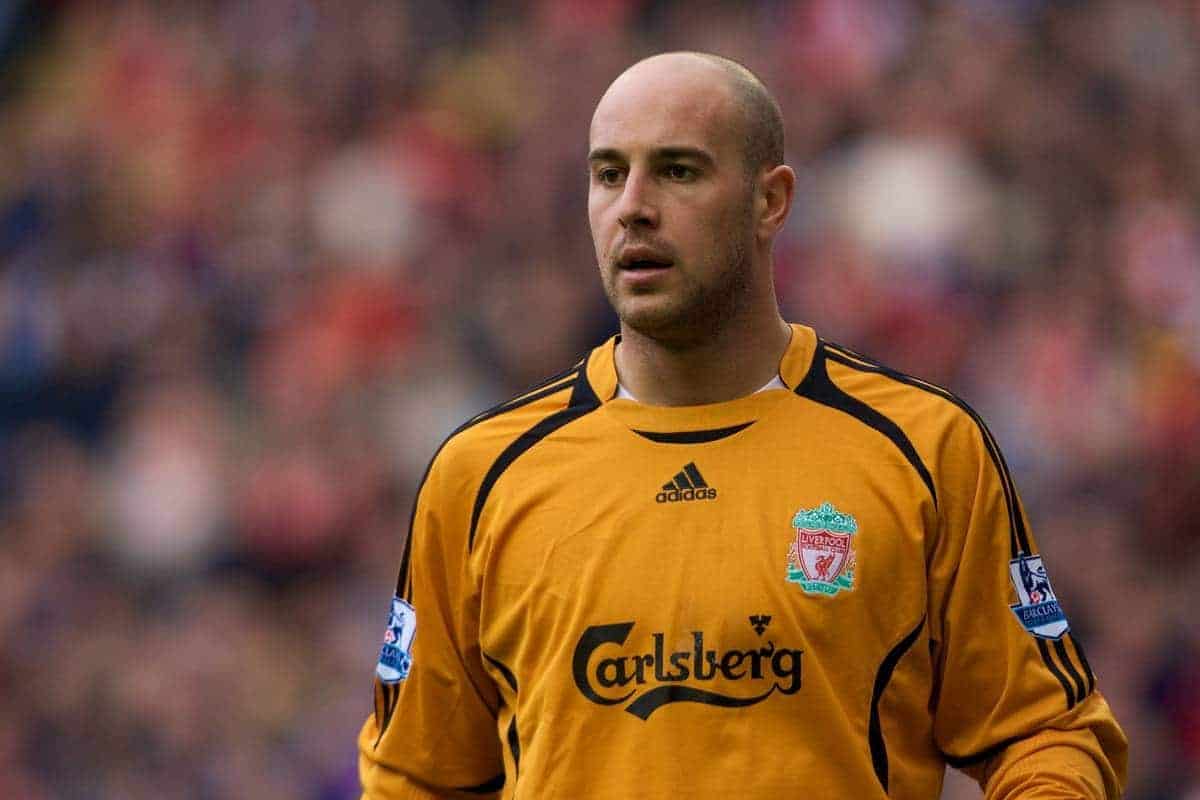 Ben Twelves takes a light-hearted pick of his favourite Liverpool team featuring only those who struggled for hair during their Anfield days. Joining in the summer of 2005, Reina went on to become an Anfield hero in his eight years between the sticks.

The classy ‘keeper was first choice on Merseyside and played 394 times becoming a fans’ favourite in the process for his supreme shot-stopping and diligent distribution, before leaving in 2013 to join Napoli on loan, and then permanently in 2014 for Bayern Munich.

Though the Spaniard had little silverware to show for his efforts on Merseyside – with only FA and League Cup winners’ medals to his name – he will always be extremely fondly remembered by Kopites. He may have become a forgotten man at Anfield, but Enrique doesn’t escape the attention enough to not claim his place in this hairless XI.

Still at the club having arrived from Newcastle for £6 million in summer 2011, El Toro joins fellow Spaniard Reina in this team having made 96 appearances to date, scoring two goals – both coming in wins at Anfield.

Slightly out of position here, Enrique makes way for a Merseyside villain. The Kop flop who signed for £4 million in the dark days under Roy Hodgson gets the nod at left-back for his sheer loyalty to a bare head down the years.

Konchesky thankfully only featured 18 times in Liverpool red, before being farmed out to Leicester City, then in the Championship, with whom he won promotion.

He then faced Liverpool last season bizarrely boasting a full head of silver hair. Work that one out.

Skrtel has virtually been an ever-present at Anfield since joining over eight ago – a period that has also seen the Slovakian proudly display a hairless head.

The tough defender who signed for £6 million from Zenit St. Petersburg has taken to the field in a red shirt 293 times to date, scoring 17 goals, and he will hope to add to those totals next season while remaining the only bald player in the current squad.

Arriving on Merseyside in 1991 from Derby for £2.2 million with a Chris Waddle-style mullet, a seven-year stint at Anfield soon put an end to a head of hair for the defender.

210 games, nine goals and an FA Cup win later, Wright’s head was no longer covered by the strawberry blonde locks he arrived with by the time he ended his 18-year career in 1998, but he will always be remembered for captaining the Reds to FA Cup success over Sunderland in 1992.

A figure in Anfield folklore for his last-gasp Merseyside derby strike, it’s only right to make Gary Mac captain of this side.

Few could believe Gerard Houllier’s decision to sign the then-35-year-old on a free transfer but what a choice it was, with the experienced, intelligent baldy playing a vital part in Liverpool sweeping to League Cup, FA Cup and UEFA Cup triumph over Alaves – a game in which he was named man-of-the-match in Dortmund.

It’s no surprise that the Kop still sing today about Gary Mac’s baldy head, his sweet right foot and numerous goals he scored after producing many memorable moments having signed for nothing. The first and only academy product in this side, Spearing slots into the midfield where he made 55 appearances – including an FA Cup Final start – for his boyhood club.

The diminutive, battling midfielder never registered on the score-sheet for Liverpool in those games, but left Anfield in 2013 for Bolton Wanderers with a League Cup winners medal to his name, having featured in the squad that triumphed at Wembley against Cardiff in 2012. The fiery and tenacious midfielder split opinion amongst the fanbase during his time at Anfield, but one thing that can’t be debated was his shortage of hair, owing to his Alopecia affliction.

After signing from Charlton Athletic aged 17 in 2010 under Rafael Benitez, Shelvey went on to feature 69 times over three years at Anfield.

That saw him notch seven goals, get sent off once and famously take on Sir Alex Ferguson, before Brendan Rodgers sold the tough-tackling midfielder to former club Swansea City for £6 million in 2013. Though a player who has had more hairstyles than Liverpool appearances, Meireles finishes the midfield due to boasting a shiny head for most of his time at Anfield.

The Portuguese midfielder represented Roy Hodgson’s only decent signing when he arrived for £11 million from Porto.

Though he struggled out of position under the now-England manager, he impressed under Kenny Dalglish before leaving Anfield after just over a season with 44 games and five goals to his name. Though a controversial character, “Stan the Man” had undoubted ability alongside his excess baggage, shown as he notched an impressive 35 times in just 81 games over a productive two-year spell on Merseyside, before moving to Aston Villa for £7 million. A striker of many clubs over a decorated 18-year career, the French hitman predominantly boasted the same hairless style throughout.

At times he had more hair on his face than head, but whatever the arrangement Anelka scored goals, including four in 20 games on Merseyside with one coming against Everton during a six-month loan spell from PSG under Gerard Houllier, who later opted not to make the move permanent and instead signed El Hadji Diouf.

Who would make your skinhead XI? Let us know in the comments below.