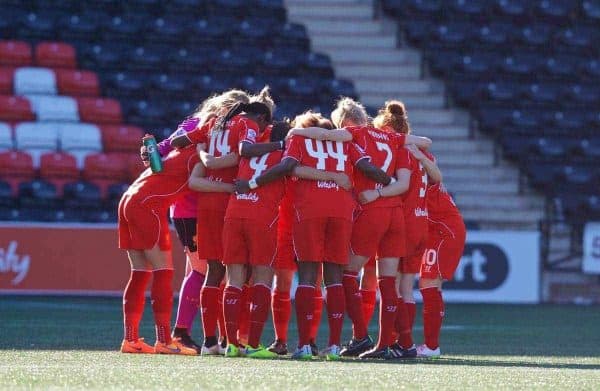 Liverpool Ladies recorded a disappointing defeat as they lost 2-1 at home to Notts County on Saturday afternoon at the Select Security Stadium in Widnes.

It was the first home game since Women’s Super League returned to action after the Womens World Cup break and Liverpool Ladies were looking to maintain the winning streak after a brilliant performance during the away win at Arsenal.

Matt Beard decided to play with development squad player Maz Pacheco in place of the injured Corina Schroder. The attacking force saw the new face Rosie White, who made her debut in the team.

Before the game England international and Womens World Cup bronze medallist Fara Willaims was presented with her Ladies Player’s Player of the Year award on the pitch as she was away with England duties during the Liverpool FC Awards gala in May this year.

Notts County showed a real ambition from the very beginning and they kept Liverpool keeper Libby Stout busy. A curled effort from a very lively Jess Clarke was well held by the Reds stopper.

It didn’t take long until County took the lead. Becky Easton made a bad tackle in the middle of the pitch which caused a free-kick. Alex Greenwood put the ball into the box and Clarke had no problems with breaking the deadlock.

It was another slow start from Liverpool, but the first chance to level the score came on 21 minutes. Martha Harris’ run down the right flank resulted with a cross which came just over bar of Chamberlain’s goal.

Four minutes later it was all square as White scored on her debut. Kate Longhurt’s shot was superbly saved by England goalkeeper Siobhan Chamberlain, but New Zealand striker made no mistake and put the rebound in to make it 1-1.

Ellen White had a chance to put County up front on 31 minutes but Martha Harris made a great interception and cleared the danger.

Minutes later at the other end Dowie had a chance with a brilliant volley, but it was well saved by Chamberlain. The Liverpool striker had another chance moments later after the resulting corner, but the ball went just over the top.

A perfect chance to take the lead came from Asisat Oshoala just before the break. A Nigerian forward raced clear on goal, but lacked precision with her finish which was blocked by Chamberlain.

Both goalkeepers were kept busy as County’s Stout to produced another brilliant save to keep out White at close range.

Second half came with the frustration as on 52 minutes Oshoala had to leave the pitch due to the knock picked up in the first half and Ashely Hodson took her place when Beard made a tactical switch. Katrin Omarsdottir replaced Satara Murray.

The Reds looked for the lead as Williams’ shot was well held by Chamberlain. On 58 minutes suporters in Widnes saw County regaining the lead as Clarke doubled her goal tally despite offside appeals from Liverpool.

The bad luck for the Reds continued as they were forced to play the final 14 minutes of the game with 10 players, having used all three subs. Williams was forced to leave the pitch due to injury.

The final result caused Beard a real headache with injury concerns over Williams, Murray and Oshoala before the important games against Everton and Birmingham. Liverpool now have some ground to make up in the title race.