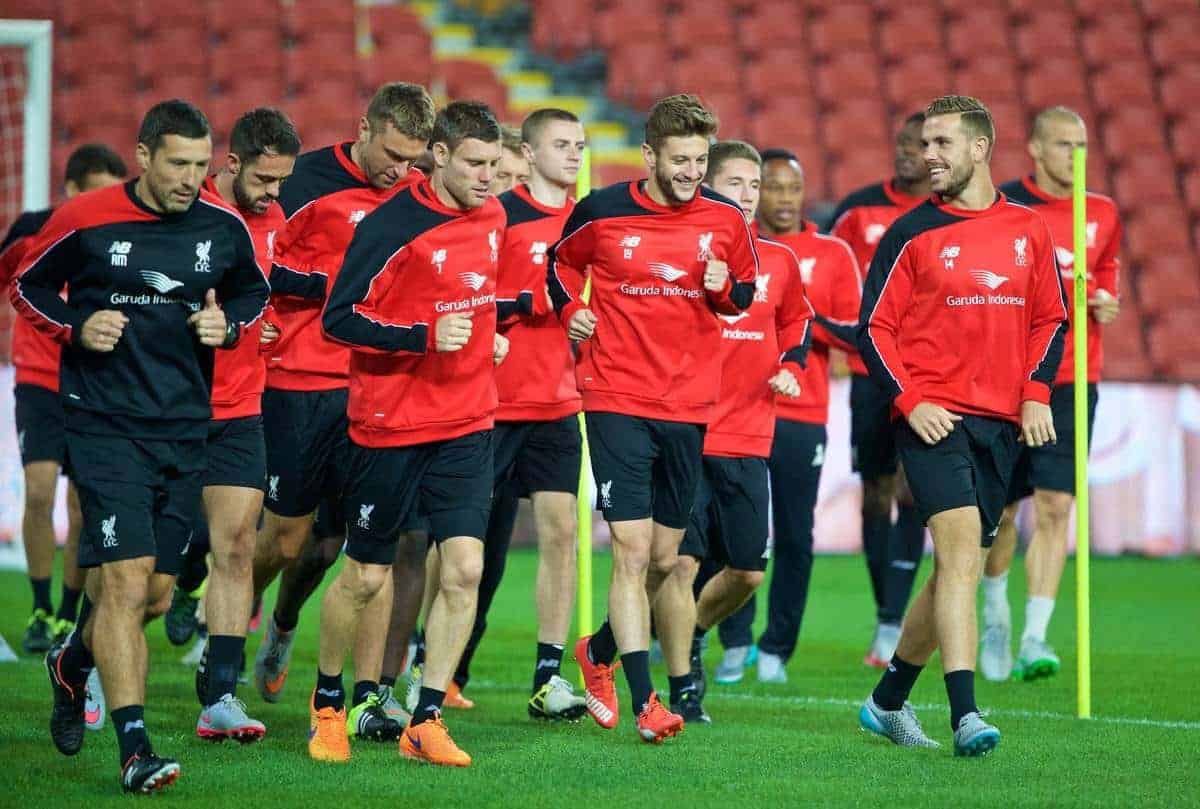 Brendan Rodgers’ side kept up their 100 percent winning record so far this summer on Monday, defeating Adelaide United 2-0 at the Adelaide Oval.

The victory follows a 4-0 win over the True Thai All Stars and a 2-1 triumph against Brisbane Roar, as Liverpool’s 2015/16 preparations continue to go smoothly.

The trip to the Far East and Australia has seen numerous Reds stars flourish, whether it be new signings, exciting youngsters or ever-improving experienced stars.

Here are Liverpool’s top five pre-season performers so far, with clashes against a Malaysia XI, HJK Helsinki and Swindon Town on the horizon. It may not have been the most sensational run of performances by Liverpool’s new captain, especially compared to his usual high standards, but Jordan Henderson has still looked like a man revelling in his new role.

The 25-year-old is a towering physical presence in the middle of the park, and now carries a certain aura that seems to lift those around him.

The relentless running is still out in full force, but he looks increasingly composed on the ball and he is making more attacking forays than in the past.

He produced a terrific 45 minutes in the win over the Thai All Stars, including that wonderful rabona assist for Adam Lallana, and was a constant box-to-box presence in both wins in Australia.

The England international is a player who has always played better without Steven Gerrard in the side, and now he really looks to be shining.

With Raheem Sterling now a Manchester City player, the pressure is on Liverpool’s other young English forward to take over the mantle.

The signs have been promising so far this summer.

Jordon Ibe has given Reds supporters plenty of reason for positivity in pre-season, producing three eye-catching performances from the right flank.

An impressive second-half cameo in Thailand was followed up by another good outing against Brisbane, in which he almost scored with a fierce strike from out wide.

He has saved his best display until last, however, with his pace, power and quick feet causing Adelaide all sorts of trouble from the start.

His assist for James Milner also shows that he can produce a decent final ball too.

Whether or not Ibe will reach Sterling’s level remains to be seen—there is only a year between them in age, and Sterling has achieved far more—but Liverpool have a player with incredible potential in their ranks.

If there’s one player who has almost been forgotten about when discussing how Liverpool’s midfield and attack could line-up next season, it’s Adam Lallana.

The 27-year-old endured an inconsistent, injury-plagued first year on Merseyside, but there are signs that he could be set to be a key man in 2015/16.

There has been a zip and creativity about Lallana’s game in every pre-season game so far, combining goals, trickery, awareness and a terrific work rate.

Used primarily on the left of a front three, the Englishman fired a clinical effort against Thai All Stars, before curling home a sublime finish against Brisbane.

He was again lively in Monday’s victory, producing a number of eye-catching tricks and flicks, and dovetailing nicely with the midfield—moments of frustration do still remain, however.

Whether Lallana will be a regular once Philippe Coutinho and Roberto Firmino return to the side is debatable.

But he’s certainly doing his best to give Rodgers a selection headache. Milner may not be the most fashionable signing the Reds have ever made, but he already looks to be an inspired piece of business by the club.

The 29-year-old has been utilised in the central-midfield role Rodgers seemingly promised him, and although the opposition has not been the strongest, he has looked a class act.

The England international has offered the work rate, industry and consistency we all expected of him, but he has also shown what quality he has on the ball.

His passing has been crisp and incisive, his ability to run with the ball has been very effective and he has chipped in with goals in both games in Australia.

Milner has always had a reputation for being hugely versatile and someone who will never perform less than a seven out of 10, but he looks set to play in one or two specific central midfield roles for Liverpool, and be one of the first names on the team-sheet.

He can only be properly judged once the Premier League gets underway, but it is hard to see Milner being a failure on the evidence so far this summer.

Joe Gomez has been a revelation this pre-season, with the 18-year-old slotting seamlessly into the side in impressive fashion.

The former Charlton Athletic starlet has looked a wonderful young player during his short spell in a Reds shirt to date, and sending him on loan in 2015/16 now seems like a ludicrous idea.

Although the England Under-19s star is seen as a centre-back in the long-term—he played a chunk of last season there at Charlton—it is at full-back where he has excelled with Liverpool.

He was effective both going forward and defensively at right-back in Thailand, and he has looked even more of a talent at left-back Down Under.

His composure on the ball has belied his tender years, his balance and composure in possession have been a pleasure to watch and his powerful 6’2″ inch frame makes him a real physical machine.

It’s always easy to get carried away with a young player, especially in pre-season, but Gomez looks like a wonderful signing who could have a massive future ahead of him.