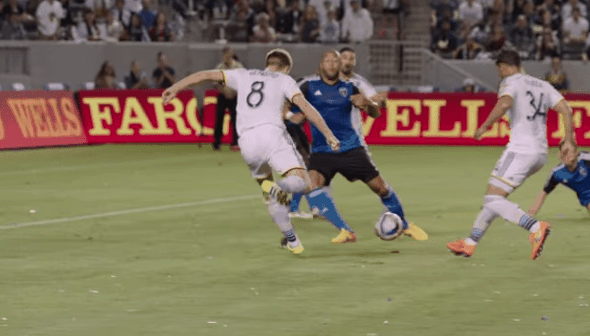 We’re not sure if this style of football highlights will ever catch on, but MLS have released a rather poignant, slow motion video of Steven Gerrard’s first goal for LA Galaxy on Friday night.

It was a familiar story for Gerrard as Galaxy found themselves 2-0 down to local rivals San Jose Earthquakes, but the 35-year-old inspired his teammates back into the game, winning a penalty which former Liverpool striker Robbie Keane converted, before scoring this equaliser.

Galaxy went on to win the game 5-2 in front of a 27,000-strong crowd at LA’s Stub Hub Center. A large amount of Liverpool shirts could be seen in the crowd.

In tribute to the Reds, Gerrard was wearing Liverpool FC-branded shin pads, which he revealed as he came off to a heroes reception after 83 minutes.