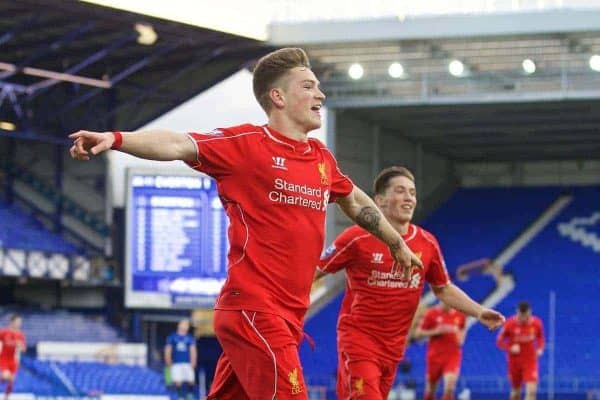 Who are the 10 academy stars included on Liverpool’s pre-season tour?

Liverpool announced their 30-strong squad for this summer’s pre-season tour of the Far East and Australia on Saturday, and while most of the focus was on the inclusion of Raheem Sterling and the exclusion of Mario Balotelli, there are some interesting names on the list.

Namely, this comes in the form of 10 academy stars deemed good enough to perform alongside Rodgers’ first team this summer.

The manager is a strong advocate of youth talent, and this four-game tour could see some players stake a claim for a first-team role in 2015/16.

So who are these 10 young talents, and what will they bring the Reds this pre-season?

Offered a scholarship with Liverpool at the age of 15, a year before he was officially able to turn out as a scholar, Fulton has long been regarded by the club as a hugely promising talent.

An imposing goalkeeper, Fulton was competing with Danny Ward and Lawrence Vigouroux for an U-21s role last season, but still made seven appearances for the Reds in the Premier League, conceding 10 goals and keeping two clean sheets.

Although unlikely to feature in pre-season, with Simon Mignolet and Adam Bogdan blocking his path, Fulton is set for a first-choice role for the U-21s this campaign.

One of the youngsters on standby for Steven Gerrard’s All-Star game back in March, Joe Maguire’s inclusion showed Rodgers’ faith in him—the 19-year-old left-back came on for Lucas Leiva and impressed.

A shuttling full-back, Maguire was one of the U-21s’ more impressive defenders last term.

Listing Roberto Carlos as his footballing idol, the raw talent of Maguire still needs a lot of honing to reach even top-flight level.

But with four assists in 28 Premier League games last season, he is an intriguing prospect.

Likely one of the more familiar names for Liverpool supporters, former Charlton Athletic defender Joe Gomez joined in a £3.5 million deal earlier this summer, and has trained with the first team throughout pre-season so far.

Strong, intelligent, pacy and versatile, Gomez has all of the attributes of a Rodgers defender—able to play at centre-back and right-back, he has a chance of a senior role in 2015/16.

Likened to former Manchester United and England centre-back Rio Ferdinand, there are serious expectations for Gomez.

Boasting a looming physique and impressive defensive strength, one of Cleary’s defining attributes is a surprisingly wide passing range—perhaps one of the indicators as to why Rodgers has favoured him over the Blackpool-bound Lloyd Jones this summer.

Cleary is behind the likes of Martin Skrtel, Mamadou Sakho, Kolo Toure, Dejan Lovren and Gomez within the Reds’ central-defensive ranks this season, so he may have to settle for another campaign of U-21s football.

But if given the chance, he does have the raw attributes required to impress.

Pedro Chirivella joined Liverpool from Valencia in 2013, with the Reds said to have paid at least £2 million for his services.

A highly rated talent in Spain, the midfielder arrived on Merseyside with a big reputation.

He has since established himself as a key member of Michael Beale’s under-21s side, with his composed Sergio Busquets-like performances at the base of midfield a vital component for the Reds.

David Vizcaíno, Liverpool’s chief Spanish scout, said in May: “In England there would have to be 100 Pedro Chirivellas in order to revolutionise English football.

“Chirivella is football, he is intelligence, control, technique, personality. I expect great things from him.”

Jordan Rossiter was incredibly unfortunate to end the 2014/15 season with a serious ankle injury, with this setback not only hampering his U-21s progress but arguably his route into Rodgers’ first-team thinking.

Instead, U-21s captain Cameron Brannagan took his place on the Liverpool bench as Rodgers saw out a sixth-placed finish.

He did, however, make his mark earlier in the season with a fine goal on his first-team debut against Middlesbrough in the League Cup.

Combative, authoritative and tactically intelligent beyond his 18 years, Rossiter is one of the most likely to make the immediate step up this term.

While not technically an U-21s player, Joao Carlos Teixeira is another who is still something of an unknown quantity to Liverpool supporters.

Having made his first-team debut midway through 2013/14, he was then loaned to Brighton and Hove Albion for last season.

He was one of Sami Hyypia’s key players during his ill-fated reign at the Amex Stadium, but was utilised less under the Finn’s successor, Chris Hughton, before a broken leg derailed his season.

A hardworking attacking midfielder with an eye for a pass, Teixeira is somewhat similar to Reds No. 10 Philippe Coutinho.

However, at just a year younger than the Brazilian, it is unclear whether he has a future under Rodgers—this could be a defining season for the young Portuguese.

One of Beale’s key attacking players, versatile attacking midfielder Ryan Kent earned the praise of Rodgers last season, with the manager describing him as a “real talent.”

Last year, Kent named Ronaldinho as his footballing idol, and there are hallmarks of the Brazilian’s swagger in his play—although Kent is a much more straightforward attacking player.

Returning from injury towards the end of last term, the 18-year-old scored four goals and made two assists in seven U-21 Premier League games between April and May.

He could thrive in Rodgers’ bold attacking line.

Strong and powerful, yet graceful and technically adept, Ojo can perform all across the front line—including as a centre-forward—as well as at central midfield.

Spending a portion of last season on loan with Wigan Athletic following several appearances on Rodgers’ bench, Ojo has clearly shown enough for the Liverpool manager to give him a chance this pre-season.

At his best as a drifting central attacking midfielder, Ojo could provide Rodgers with a useful option this season.

Harry Wilson, along with Kent and Ojo, stood out as one of Liverpool’s best young talents last season—it is clear to see why Wales manager Chris Coleman felt comfortable giving him his senior debut as a 16-year-old in 2013.

While small in stature, Wilson possesses quality in abundance.

He is devastating when running at defenders and effective both in terms of creating chances and scoring goals.

He netted a stunning long-range winner in last season’s 2-1 Merseyside derby win for the U-21s.

Though still a very raw talent with a tendency to drift out of games, Wilson has shown the quality required to become a key feature in Liverpool’s future.