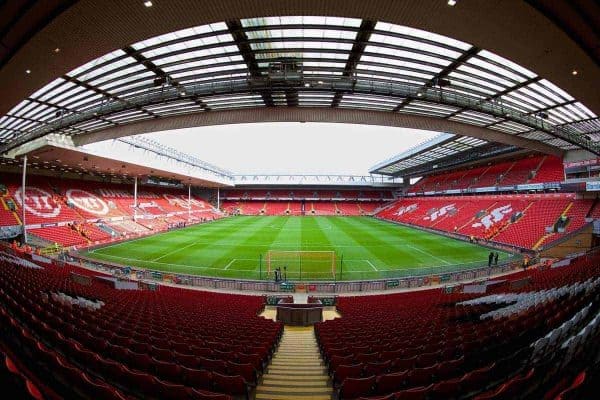 Every year when the first Anfield game of a new season comes around I feel exactly the same. It doesn’t matter how old I am. It matters not that I’ve been there more times than I can count. It doesn’t even matter if the opponents are TNS in the first preliminary qualification round of a big cup competition we’ve just won.

The buzz I get from stepping inside Anfield for the first time of a new campaign never dissipates. It’s an expensive legal high these days, but when watching Liverpool FC is your choice of adrenaline shot you’ll always have a price to pay. Financially and emotionally.

It’s the first glimpse of that luscious green grass – grass that looks greener in August than it does in May – that I’ll be dreaming of on Sunday night. That glimmer of the pitch when you’re in the concourse before kick-off is Anfield’s cleavage. A seductive, enticing prospect that sends a surge through red-blooded veins. It’s good to be home after three months away.

But this season, things are different. There’s a huge element of not knowing what to expect on Monday night. And not just on the pitch.

A 1-0 win at Stoke won’t have the ‘In Rodgers We Truss’ banners hanging from the frame of the new Main Stand, but it isn’t half going to feel weird sat inside Anfield with the giant new structure looming over us having walked past a new hospitality marquee that is being erected outside while work is ongoing.

I sit in the Paddock so I’m half expecting to be issued with a high-vis jacket and hardhat when I go through the turnstiles, but I’m reliably assured that the This Is Anfield matchday programme will still be on sale from the kiosks rather than copies of the Wickes catalogue.

Of course, another summer of new signings means there will be plenty of changes on the pitch too, but while it promises to be a big night for Christian Benteke, Roberto Firmino and co it will also be an important evening for Jordan Henderson.

He’s skippered the Reds at Anfield before in Steven Gerrard’s absence, but against Bournemouth he’ll lead the side out for the first time in a home game knowing that the job – and the responsibilities that come with it – belong to him on a full-time basis.

The manner in which he leads the team will inevitably be subject to plenty of analysis in the coming months, particularly if, sorry, when games are lost, but the biggest task for Henderson is ensuring his form doesn’t suffer.

Some players, Gerrard for example, thrive with the armband on. Others don’t. The changing nature of who was playing alongside him was a significant factor, but I never felt Sami Hyypia was quite at his consistent best in 2002/03 – and the start of 2003/04 – when he became club captain.

Henderson’s form will, naturally, now be compared to how it was before he replaced Gerrard as top dog in the dressing room and that is something he will have to deal with.

Is he up to the task? Only time will tell, but when you read Henderson’s programme notes for Monday’s game you’ll be encouraged by what he has to say as he is taking nothing – including his place in the side – for granted. Which is something that should also apply when considering the outcome of Liverpool v Bournemouth.

Should the Redmen beat newly promoted opponents having strengthened the squad this summer with several new signings and having kicked things of with an optimism lifting away win?

Well yes. But then I was thinking exactly the same thing when I walked into Anfield on August 14, 1999 after we’d won 2-1 at Sheffield Wednesday on the opening weekend only to see Liverpool beaten 1-0 by Watford.

Getting stung by the Hornets made that first home game buzz wear off very quickly and I’m all for early season optimism lasting as long as it can so three points is a must against the Cherries. Because things will start to get a lot harder a week on Monday…

• The new-look This Is Anfield matchday programme is available at the ground on matchdays, from official Liverpool FC club shops or to order from www.sportmediashop.com.

Subscribers can currently save £12, the equivalent of three issues free.