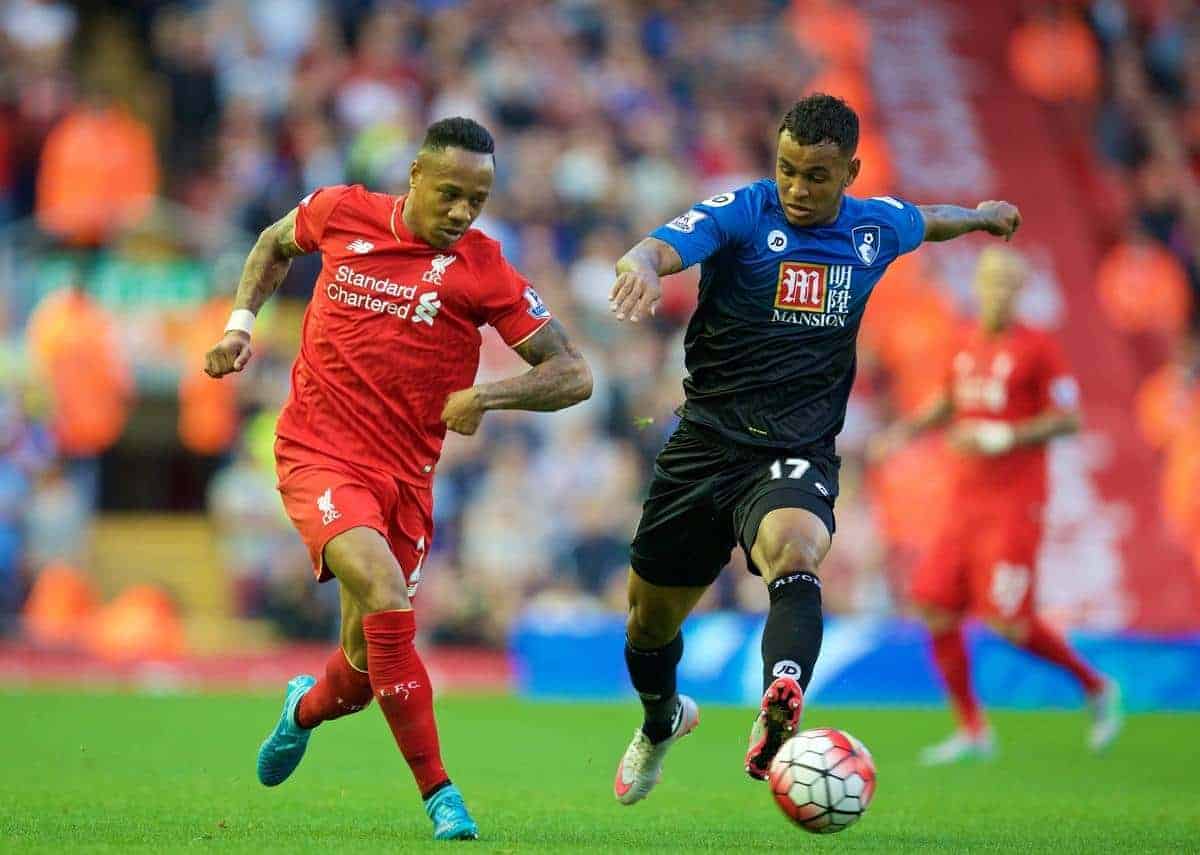 Brendan Rodgers’ Reds made it two wins from two with a hard-fought victory against the newly promoted Cherries.

Christian Benteke’s match-winning tap-in after 26 minutes proved to be enough to hand Liverpool a second successive win, despite an unconvincing performance on a tricky night at Anfield.

It was far from an impressive display from Rodgers’ men, but another battling win ensured the Reds importantly backed up their good work on the opening weekend against Stoke City.

Here are the talking points from the match.

Making his first Anfield appearance since his £32million move, Benteke produced the goods on a difficult night at Anfield.

The Belgian turned up with the match-winning goal from Jordan Henderson’s teasing cross but alongside his first Reds strike, Benteke’s all-round performance was hugely promising as he lead the line superbly.

The 24-year-old’s movement was a far cry from the early fears; he linked well with Philippe Coutinho throughout and provided a mobile outlet across the front line. His distribution was tidy as he played more key passes than any Red (4) – while he also dominated aerially – winning a huge 10 aerial duels – alongside providing the platform to relieve pressure with impressive hold-up play.

Benteke showed he's much more than just a target man. A huge ariel threat but tonight he pressed, ran in behind and showed a good touch too.

Alongside his selfless work, Benteke’s threat in and around the box was the key ingredient behind the victory however – with his goal the perfect way to top off his Anfield bow – but he should have added a second late on when his effort hit the bar when he should have found the net from six yards.

Overall it was an impressive performance from the big-money signing and hopefully a sign of things to come.

The new right-back turned in an eye-catching display also on his Anfield debut, looking at home in the position and at Anfield instantly.

Clyne was solid defensively; he met challenges aggressively, and was quick to step out and stop danger developing at its earliest point, with his pace and agility a huge factor behind his controlling performance down the right side where he made four tackles as well as two interceptions and clearances.

Its good to have a proper right back for a change. #Clyne

The 24-year-old completely nullified the threat of Max Gradel down Bournemouth‘s left, swarming his opponent not allowing him an inch, and once he completed his defensive duties, he didn’t hesitate to burst forward to provide a welcome supporting outlet from wide and deep, also registering a key pass.

The way Clyne has settled in so seamlessly since his £10million arrival has been a real positive for Rodgers’ new-look side, and more performances of the same high quality will make the total £12.5million fee look a bargain in the not too distant future.

Expectations on the shoulders of Adam Lallana are high for this season, but Liverpool’s No.22 shows no sign of proving his worth at Anfield currently.

The 27-year-old struggled to make any real impact on Liverpool’s performance, and aside from a couple of flashes of positive play, the £22million signing showed nowhere near enough on a night he was needed to come to the fore to share the creative burden.

Lallana was slow in and out of possession, and despite playing numerous roles – including centrally in attacking midfield at the expense of Coutinho who was farmed out wide – he failed to perform, with his defensive work – which saw him make more tackles than any Red (5) and the joint-highest interceptions (2) – more impressive than anything he produced offensively.

How on earth is Lallana deemed a better option than Firmino? #LFC.

It was a disappointing display from the former Bournemouth academy man, who was outshone by Coutinho again, and with Roberto Firmino closing in a return to full-action, Lallana faces a real battle to keep his place in the starting XI. [td_ad_box spot_id=“custom_ad_3″]

On a night of a few negatives, the biggest perhaps came with the worrying loss of Captain Jordan Henderson – with his second half absence particularly noticeable.

The Skipper was withdrawn after 51 minutes with a foot injury, and with his exit, Rodgers’ side lost shape, discipline and direction in midfield, despite the arrival of Emre Can who was strong in the middle of the park but on occasions exposed.

Henderson dictated play well at times first half – his sensible distribution kept the Reds in the ascendency after a slow start – and his influence in open-play was vital again, as it was from his superb delivery that Benteke knocked home what proved to be the winner.

10 – Jordan Henderson has 10 assists in the Premier League since the start of last season; more than any other English player. Spark.

Rodgers faces an anxious wait over the extent of damage to his Skipper, and Henderson’s availability next week could prove the difference to Liverpool coming away from the Emirates to show for their efforts.

Another Vital Three Points as Reds Find Their Feet

It was far from the spectacular, fluent performance hoped for in the Anfield opener, but another three points at the early stage of the season ensured it was once again job done.

6 points out of 6, 2 clean sheets, Benteke off the mark. Would have snapped your hand off for that two weeks ago. Onwards and upwards.

The Reds sit with six points on the board from two games – despite not being anywhere near close to hitting top form – and while it is vital performances reach the level desired, positive results at this early stage with confidence needing to be instilled within the squad is of paramount importance.

A quick start has proven to be essential over the recent years in which the Reds have enjoyed a good campaign – the memorable 2013/14 season started with three consecutive 1-0 wins – and with maximum points with the help of improved defensive displays, Rodgers’ men have gone some way to allowing that to happen again.

The performance was unconvincing, the result was important. No question #LFC must improve but they have momentum if nothing else

An improved display will certainly be needed in order for Liverpool to come away with anything to show from their visit to the Emirates Stadium next Monday, but momentum and a winning habit, especially when playing unconvincingly, is only a positive trait.