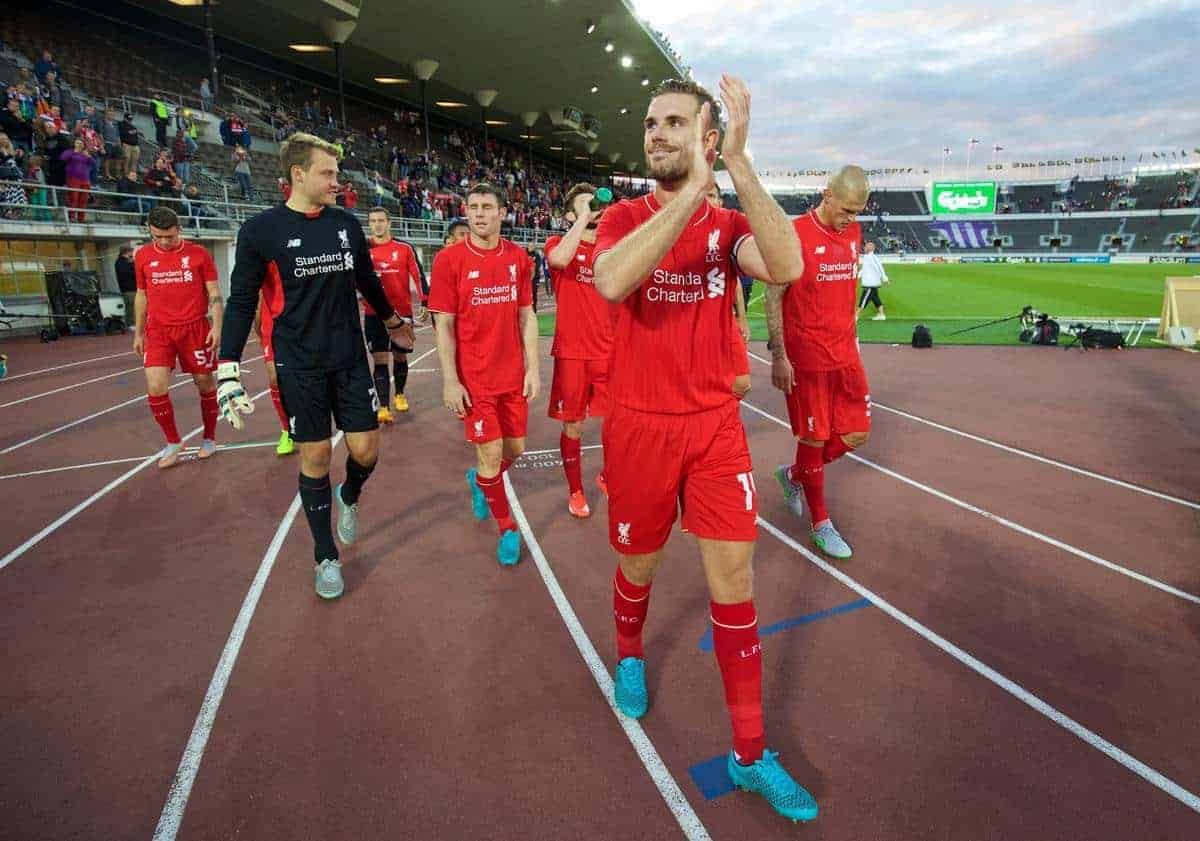 Following the Reds’ comfortable 2-0 victory against the Finnish Champions, Ben Twelves picks a number of discussion topics from the penultimate warm up clash.

Liverpool extended their unbeaten pre-season run with a controlled performance and easy 2-0 success over HJK Helsinki on Saturday.

After a largely uneventful opening 72 minutes, second-half substitute Divock Origi put the Reds ahead with his second pre-season goal, before Philippe Coutinho, on his return to action, cemented victory five minutes later with a deflected effort.

It was another productive workout for Rodgers’ men, but also showed there is still work to be done ahead of next weekend’s kick-off.

Here are the talking points from the clash.

Danny Ings Impresses Despite Harsh Luck In Front of Goal

Though the new signing failed to do what all strikers want and register on the scoresheet, it was far from a disappointing performance.

The 22-year-old – spearheading the attack with Origi in reserve – showed a whole host of promising signs during the encounter despite failing to find the net.

Ings could have done better with a couple of opportunities including from Jordon Ibe’s cut-back, with his touch deserting him at another, but he was unlucky too with a couple of instinctive efforts, including a glancing header across goal from Jordan Henderson’s free-kick.

He failed to find the net before being replaced, but Ings’ movement in and around the box really caught the eye as he provided a mobile outlet in attack, where his tidiness in possession – especially in tight areas – was impressive.

He also worked hard out of possession pressing from the front, and his unselfishness alongside the positives of his game will undoubtedly have pleased Rodgers, with the only thing missing from his performance being a goal.

It was the Brazilian’s first match time with the first team of the summer, and he typically impressed, grabbing the match-clinching goal.

There were – as expected – moments of rustiness for Coutinho, with final passes off key at times, but there were far more moments of class than sloppiness from the 23-year-old on his first game back.

Typically creative and tidy, the Brazilian worked well with his close control, dribbling, feints and jinks in and around the box making it almost impossible for HJK to take the ball from his grasp.

Only a couple of over hit and underweighted passes prevented the Reds enjoying more clear-cut chances, but Coutinho, after a couple of speculative attempts, found his range late on, when his curling effort found the far corner of the net.

Ings: Philippe Coutinho is something else — it’s going to be great to play with him.

Danny Ings spoke pre-match of his excitement at playing with the magician, and even though he was way off his brilliant best, it was still plainly obvious as to why.

The Liverpool manager made a return to the unsuccessful formation in the first half in Helsinki, and it once again proved an uninspiring move.

With energetic duo Henderson and James Milner anchoring midfield and Coutinho, Adam Lallana and Jordon Ibe in support of Ings, the Reds endured a flat first half with little attacking threat in the system.

Though Rodgers’ side controlled the game, Liverpool lacked energy from the middle of the park with Henderson and Milner both restricted in their forward running, with the onus then falling on Coutinho to supply Ings who largely fed off scraps in a frustrating first 45.

With Ibe and Lallana very much on the periphery of the game – despite the teenagers’ best efforts to create – the Reds struggled for attacking fluency and to create clear chances; epitomised by Coutinho’s speculative 40 yard strike with little else on.

Rodgers: "The game was a good workout for us. Our fluency was much better in the second half. It was another good game for our fitness."

Second-half, the more settled Reds played with more purpose and fluency – as Rodgers acknowledged post-match – no doubt aided by the scrapping of the rigid 4-2-3-1 and switch to the regularly utilised 4-3-3. It paid dividends as two goals arrived.

4-2-3-1 did nothing to help Liverpool impress last season and with the same happening in Helsinki, and Rodgers must avoid using the system this season.

Jordon Ibe Impresses Again with Man of the Match Display

It was a flat penultimate friendly fixture in Finland, but the eye-catching display of the talented teenager helped light up proceedings.

Impressing again in the preparations for the new season, Ibe turned in another strong display playing on the right of the Reds attack, where he proved too hot to handle for the HJK left side.

Full of confidence and visibly so, Ibe drove at the Finnish back line time and again, leaving his marker for dead on occasions and giving him the run around numerous times.

Jordan Ibe was yet again our best player today!been by far the outstanding player from the pre season games!

Final delivery and decision making was at times lacking from the 18-year-old, but any negatives were far outweighed by the positives of his performance, with his pace, power and trickery providing Liverpool’s biggest threat.

And another good performance saw Ibe claim an assist for Origi’s opener – when he breezed effortlessly past his marker before fizzing a dangerous low ball across – which Milner flicked expertly into the Belgian’s path, before he turned and smashed home.

It’s been a brilliant pre-season for the youngster and he has shown his readiness for regular action from the off for the upcoming campaign.

In a game that Brendan Rodgers labelled as “the toughest of pre-season”, the Reds boss will be pleased by an improved defensive display.

Though helped by the added protection of a two man anchoring midfield first half, the back-line – which could turn out to be the back four that takes to the pitch at Stoke next week – worked better as a unit and dealt positively with any danger.

Apart from two scares from corners which must be collectively improved, and quickly, the Reds defence looked comfortable and in control, with Martin Skrtel and Dejan Lovren cutting calm, collected figures at the heart of the back four.

Nathaniel Clyne was far from his best but did his job adequately at right back, while Joe Gomez again oozed class on the opposite side with another performance that belied his years.

Though Liverpool’s dominance meant the defence were largely untroubled, the level of concentration and no-nonsense manner in which danger was dealt with was pleasing.