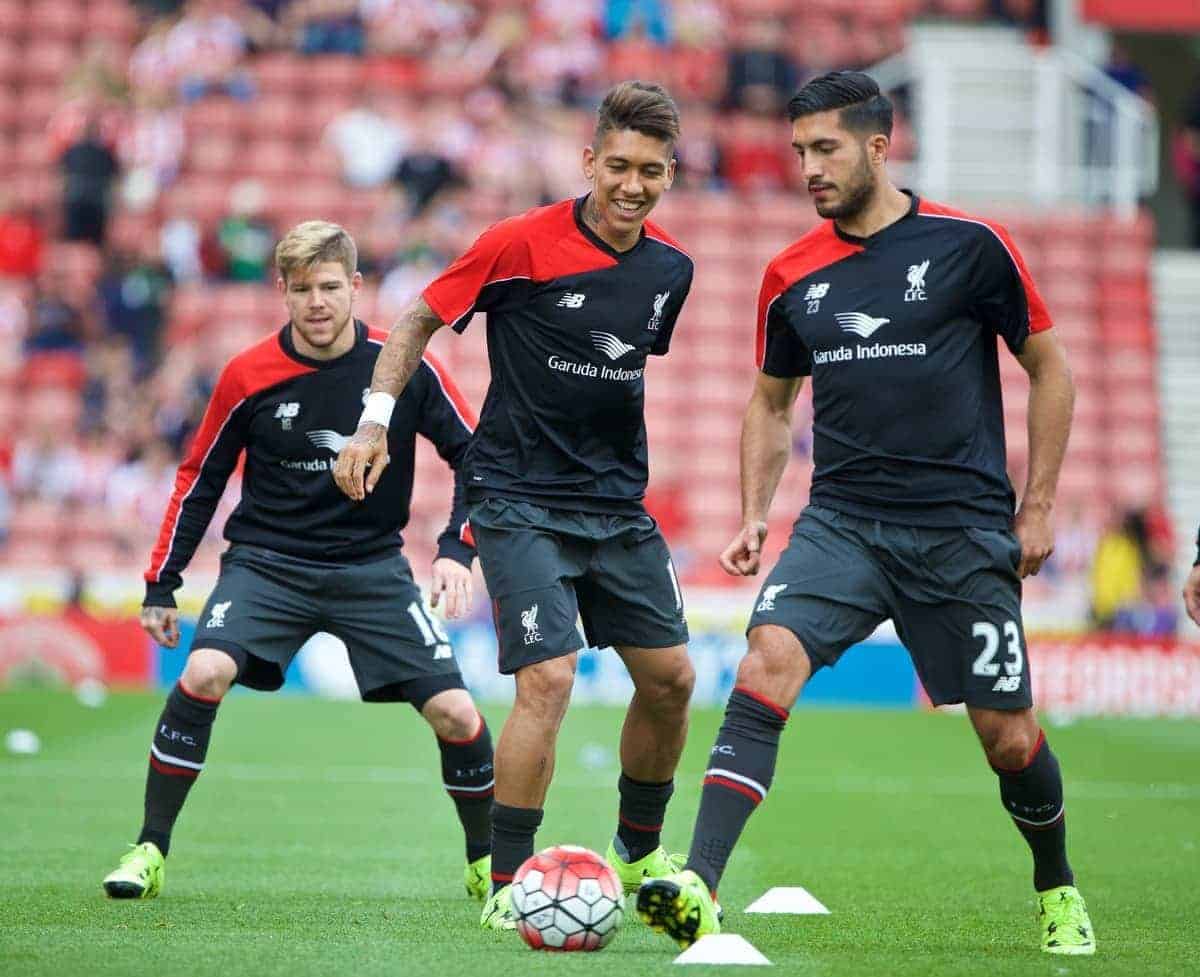 Liverpool travel to north London on Monday night to take on title hopefuls Arsenal in their third Premier League game of the new season. Here, we take a look at the possible team selection options ahead of the clash. Brendan Rodgers’ Reds head to the Emirates Stadium looking to continue their positive start to the season against the Gunners and make it three wins from three.

It’s been a perfect start points and results-wise for Liverpool with morale boosting, back-to-back wins – something that the Reds had to wait until October to record last season.

The new-look side couldn’t have wished for a better start to a campaign in which the Reds look to bounce back to the Champions League stage at the first attempt.

BR: Arsenal’s an important game, they’re a rival we expect to compete with at the top. It’s important for confidence, psychologically.

Monday’s match against Arsene Wenger’s title hopefuls represents a much tougher challenge than the opening two games, however.

Rodgers’ men will need to improve on their winning, but ultimately unconvincing, performances if they’re to come away with anything from a notoriously unhappy hunting ground.

The Reds have won just once in nine Premier League visits to the Emirates.

That last, and only, league win at Arsenal’s current home came back in August 2011 with Kenny Dalglish’s side claiming a 2-0 victory, and Rodgers’ men will need to produce another resilient defensive display at the very least if they are to return to Merseyside with a positive result.

Jon Flanagan, Joe Allen and Daniel Sturridge are all still out, but positively the striker nears a welcome comeback to action and is expected to return to training next week as he nears a recovery from hip surgery – with the looming trip to arch rivals Man United targeted as the possible comeback game.

Jordan Henderson could be added to the injury list after coming off against Bournemouth with a foot injury.

But as Rodgers faces an anxious wait over his availability the captain is set to be afforded every opportunity to prove his fitness to take part on Monday.

Apart from doubts over the skipper, the Liverpool boss has the rest of the squad at his disposal.

After keeping two clean sheets Rodgers could again keep faith with the same defensive line-up against the Gunners, though Alberto Moreno will be hopeful of coming into the side after an impressive cameo against the Cherries.

Midfield is where the Northern Irishman has problems to solve – with Henderson’s absence looking increasingly likely – and Emre Can could make his first start of the season after two appearances from the bench.

Rodgers could also call Lucas Leiva straight into the starting lineup should he consider a change of shape.

In attack, successive flat performances from Jordon Ibe and Adam Lallana in particular could see the pair drop to the bench and Rodgers opt to play Philippe Coutinho in the final third along with Roberto Firmino, who could make his first Reds start as he continues his return to fitness.

Christian Benteke is set to retain his place leading the line after netting a pressure-relieving, match-winning first Liverpool goal against Bournemouth last time out. Rodgers could be forced into changes at the Emirates – depending on Henderson’s fitness mainly – but despite the ongoing assessment over the captain, the Liverpool boss is hoping to name an unchanged side for the clash.

BR: One or two players to assess but hopefully we’ll be otherwise unchanged at Arsenal.

The chance to provide consistency to a side that has opened the campaign with successive wins can only be a positive trait as the Reds look to make it nine points from nine, to match the quick start of the 2013/14 campaign that proved to be key for a strong season ahead.

Keeping the same shape and personnel – providing Henderson recovers in time to feature – the Reds could line up looking like this at the Emirates Stadium: However, if changes are required should Henderson fail to improve enough in time to play, Rodgers has a number of ways he could juggle his side.

But with Can having impressed in two appearances as a substitute – and Rodgers wanting to retain as much consistency with selection as possible – the German is likely to come into the midfield, as a straight swap for the skipper.

Can entering the XI to play alongside vice-captain James Milner could be the only change, meaning the back four and attacking four could remain the same for the third game running.

With just the one alteration of Can for Henderson, Liverpool could take to the pitch looking like this come kick-off: Liverpool have a poor record after numerous disappointing visits to the Emirates, but if the Reds have genuine ambitions to return to the Champions League, taking points off rivals is essential.

What better time to start than on Monday night?

Arsenal vs. Liverpool is set to kick off at 8pm (BST), follow This is Anfield for updates throughout the night.

Fantastic Enhanced Odds offer from Favourit. Get 10/1 on Liverpool to beat Arsenal at the Emirates on Monday night! Click here to take advantage!