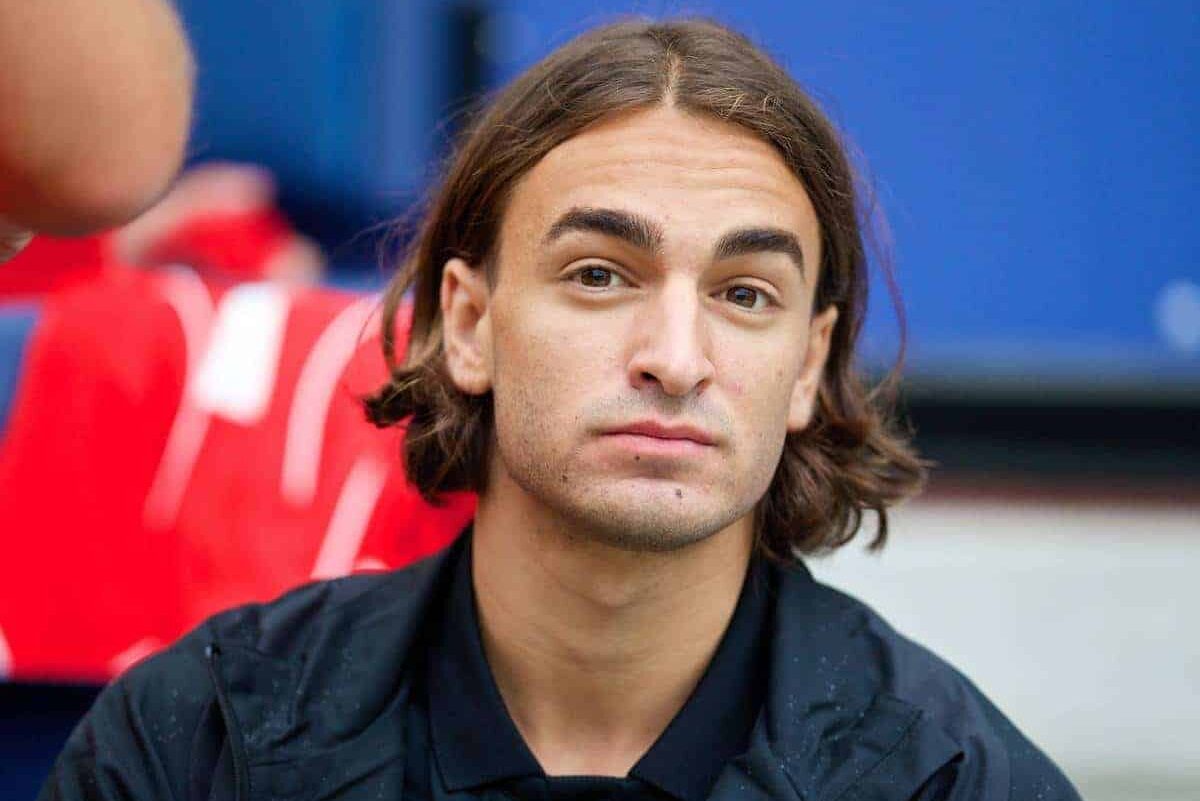 Not named in the matchday squad for the opening game at Stoke City, Lazar Markovic‘s future at Liverpool is in doubt a year after arriving for £20 million. Thomas Bolton takes a look.

After a busy preseason that concluded with a flurry of friendlies, analysis and speculation, Liverpool’s much anticipated opening fixture against Stoke is done and dusted. Among all the talk of 4-3-3s, the assured performance of the Liverpool back line and, of course, Philippe Coutinho‘s wonderstrike there seems to be little column inches left for forgotten man Lazar Markovic.

Few Liverpool fans would’ve noticed the absence of the young Serbian from the travelling squad – which is testament to how far his fall from grace has been. Described by Brendan Rodgers as ‘hungry’ and ‘exciting’ upon signing, the £20 million attacker failed to do little more than fizzle during his first season on Merseyside.

Much has been made of the “freezing out” of Liverpool’s unwanted trio of Mario Balotelli, Fabio Borini and Jose Enrique whose omittance from Liverpool’s preseason indicating they have no future at Anfield.

However, despite lack of coverage Markovic also finds himself almost on the periphery of the squad after being barely featured in preseason. Whilst the Serbian was taken on the tours of Australia and South East Asia, he found his opportunities limited despite an impressive showing capped with a  goal in the 4-0 win against True Thai AllStars.

A comparison of Markovic’s player photofrom this season compared to last shows how shot on confidence the attacker looks.

A stunted preseason for the Serb, the arrival of Roberto Firmino and the assured preseason performances of both Adam Lallana and Jordon Ibe mean that despite the departure of Raheem Sterling, Markovic is further from the first team than he ever has been at Anfield.

The 21-year-old, though, clearly has talent, or Liverpool would not have considered spending the amount of money they did on the youngster. He is still young and has a host of continental experience, having made eye catching contributions in title winning seasons at Partizan Belgrade and Benfica whilst still in his teens.

On top of making the Serbian SuperLiga Team of the Year two years in a row whilst in his late teens with Partizan, Markovic also impressed in European games against teams like Rubin Kazan and Inter Milan. Against Inter at the San Siro especially, Markovic’s ability to dribble the ball and make attacking runs was highlighted as he was successful with 8 out of his 11 attacking take ons.

The young Serb was also named in the Europa League 2013-14 Squad of the Year as well after helping Benfica to the final at only 20 years of age. This put him amongst elite footballing company such as Buffon, Rakitic, Pirlo, Tevez and Higuan.

Despite the disappointment that was the slim young attacker’s first season at Anfield his stunning volley against Sunderland and goal against Tottenham as well as his intelligent set up of Mario Balotelli at Old Trafford (who fired at David De Gea) show flashes of the talent that could make Markovic a Kop hero.

2015-16 represents a make or break year for Markovic. Fabio Borini is a strong example of what happens to a talented attacker who doesn’t make the Liverpool grade. Although Markovic’s outings were limited in pre-season, Rodgers’ comments after the Thai All Stars game, that 2015/16 will see Markovic  hopefully “really push on”, seem to indicate that the Serbian will get a run in the team at some stage.

More than likely Rodgers will employ the attacker in Liverpool’s Europa League fixtures to give his predetermined Premier League starters a rest. Markovic must utilise his previous European experience to grab the attention and highlight his talent in these games.

In the game against Basel last season Markovic showed a distinct flair and strong determination to influence the game before a harsh red saw his day come to a premature close. More performances like that (minus the red card) will be needed to push his way onto Rodgers’ teamsheet.

Firmino, Lallana and Ibe are all currently preferred for a wider attacking role, however this does not mean the writing is on the wall for the Reds’ No. 50. Firmino will most likely require time to adapt to the English game like many European imports, Lallana’s 14/15 form was patchy and his ineffectual performance against Stoke has not strengthened his claim on the spot and Ibe as a young talent will need to be nurtured throughout the season.

As stated earlier, not many column inches have been devoted to Markovic in recent weeks and he may feel less of a spotlight on his performance this year compared to last. On top of that his year in the Premier League means he knows what to expect for this coming season.

He is an incredibly talented player having been likened in talent at his young age to Messi and Ronaldo by former Chelsea boss Avram Grant. However, after being pushed away from the first team, this year represents a make or break, succeed or face a potential move away from Liverpool.

If Lazar can keep focused and take his chances, then this will be a big year for the young Serbian.