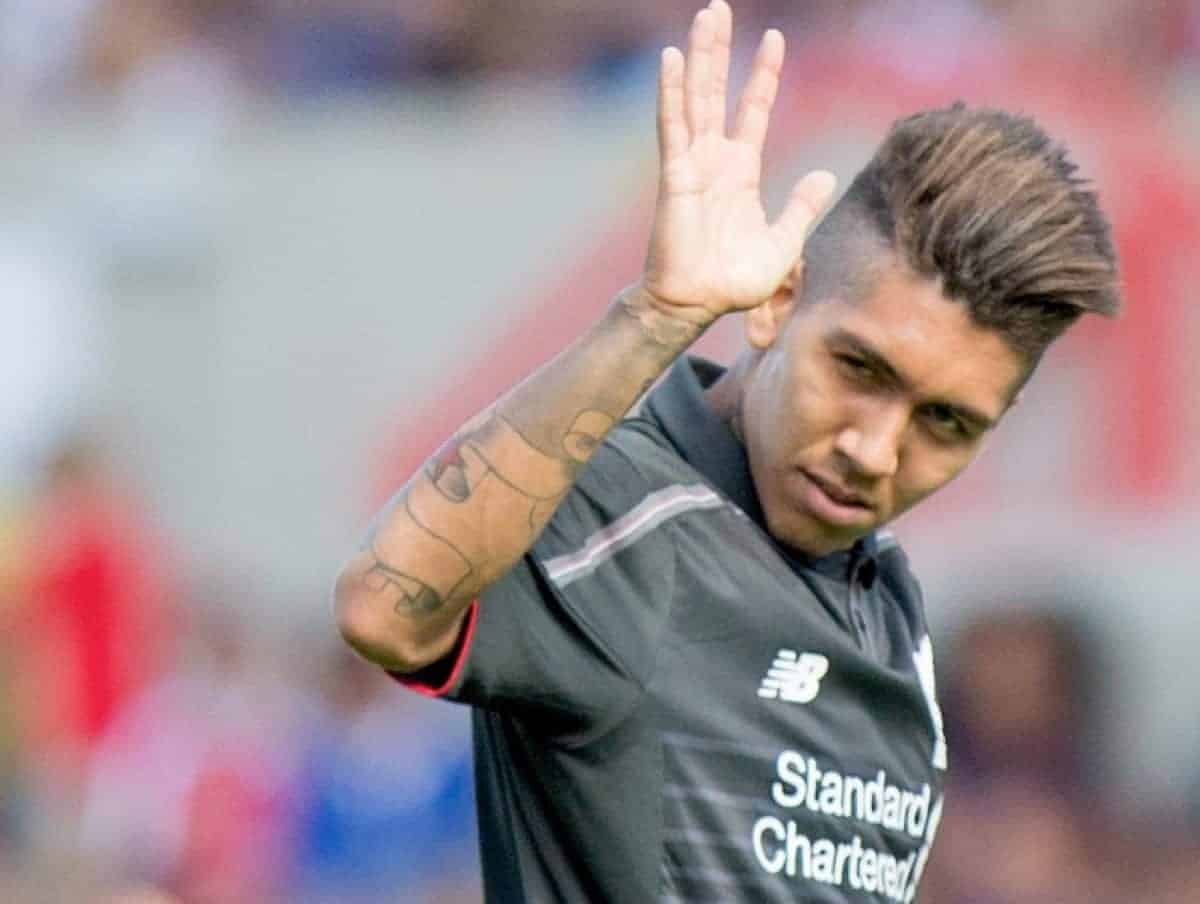 While the Belgian striker grabbed headlines for his sensational first Reds goal, Firmino’s 67 minute display gripped imaginations over what could yet be to come with an impressive first outing.

Rodgers only added to this with his post-match comments: “Once Firmino gets fit you will really see his qualities and ability!”

The Liverpool boss lined his side up in a 4-3-3 shape which saw Firmino deployed on the left side of the three man attack alongside Benteke and Lazar Markovic.

Though the Brazilian lasted only 13 minutes wide before being moved centrally as a result of Joe Allen being replaced by Joao Carlos Teixeira and a switch to 4-2-3-1, he hit the ground running making an instant impact.

From the off the 23-year-old showed his desire to become a key attacking force in Rodgers’ side, as he played extremely high, occupying Swindon defenders looking to run in behind and be released on goal.

Only two minutes in to the game it happened, with Lucas Leiva’s ball into space releasing the Brazil attacker, who raced out of the traps like a greyhound to latch on to his countryman’s fine pass.

He couldn’t quite nip past Swindon’s trialist Liverpool U21s ‘keeper Lawrence Vigouroux to find the net, with the Chilean stopper out sharply to thwart him, though perhaps illegally which should have seen the Brazilian awarded a penalty.

Immediately Firmino signalled his attacking threat and he started as he meant to go on.

After a brief spell on the right, he shifted centrally where he looked equally as comfortable as when operating from the left.

Offensively, he ensured he was the man to provide a link from midfield to Benteke, and instantly there were signs of what could develop in time ahead.

Five minutes after moving inside, Firmino, almost playing alongside Benteke, pressed superbly before robbing Town defender Brandon Ormonde-Otewill of the ball on the touchline, driving inside and squaring for Benteke, who produced a weak finish from the cut-back.

That chance alone showed what the Brazil international will bring to the Reds attack.

Though he carved Benteke’s chance through determination and desire, Firmino more than demonstrated the ability alongside his work-rate that makes him such a superb acquisition.

He orchestrated everything Liverpool did going forward with his touch and technique alongside his productivity and reliability on the ball bringing Teixeira and Markovic into the game, with the pair growing in confidence as they linked with the new man.

A trait of selflessness accompanied his quality and it wasn’t long before his individual brilliance almost saw him register on the score-sheet.

A mazy run and twice change of direction lead to Firmino firing his first scorching shot from distance as he showcased typical Brazilian flair; he wasn’t too far away of the left corner of the net either with Vigouroux left scrambling.

Most importantly and impressively however, was Firmino’s desire to be the man to stretch the Swindon back-line.

The Brazilian countered the early fuss over Benteke’s lack of forward movement by ensuring he would be the man to provide when the Belgian dropped deep to provide a springboard for attacks to be built, or drifted into the left channel to draw defenders and create space centrally.

With Firmino acting as a false striker in play, Liverpool enjoyed the ability to operate with a functional attacking set-up and one that enjoyed consistent threat as well as flexibility.

As a result, Benteke enjoyed support rather than cutting an isolated figure, epitomised by Teixeira and Firmino himself being within touching distance of the Belgian when he spectacularly volleyed the Reds ahead.

The new striker could also have netted another couple but a combination of rusty finishing and the assistant referee’s flag made sure he left the pitch with Firmino before the 70 minute mark with only one goal to show for his efforts.

As to be expected having had only a short pre-season, Liverpool’s No.11 lacked sharpness at some stages as the second half wore on, with his touch evading him at key moments, particularly in tight areas and when looking to dribble with the ball.

However, it was undoubtedly a productive afternoon’s work for the debutant before being replaced.

BR: We’ve got a lot of creativity in the squad now, it’s very exciting. Lallana, Ibe, Firmino, Coutinho… you can see what we’re trying to do

Even though it was a first appearance and only a friendly, Firmino clearly showed his obvious suitability to Liverpool’s attack for the coming season – something that looks an exciting prospect with options such as Philippe Coutinho, Jordon Ibe and Daniel Sturridge to include.

After impressing on debut, Rodgers will be hoping the Brazilian will be able to feature for the season opener at the Britannia Stadium next weekend as the Reds look to get off to a winning start.

The right attacking line up including the perfect new fit in Firmino will certainly go some way to making that happen.