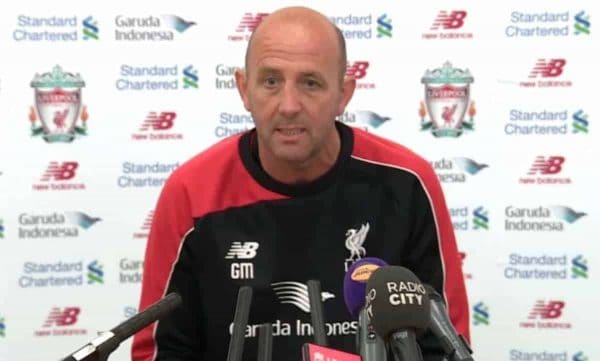 Gary McAllister on Liverpool vs. Carlisle: We want some stability in the shape and style

Gary McAllister believes Liverpool’s players should be thriving under the growing pressure at Anfield.

Liverpool – and particularly manager Brendan Rodgers – are facing increased scrutiny after a mixed start to the season.

The 50-year-old said: “There is always pressure when results don’t go well at a club like Liverpool. It has not changed since the days I played here.

“A couple of poor results and the heat is on, you are under the microscope. Players have got to thrive under that pressure. That is the thing that drives you. You have got to grow and cope with the demands of playing here.”

McAllister, who had two successful seasons as a player at Anfield from 2000-02, returned to the club in the summer as Rodgers overhauled his backroom staff.

With seven new players also arriving there has been plenty of change at the club and results – Liverpool have not won in five games in all competitions – suggest things are still to settle.

But McAllister is convinced the Reds are on the right path and claims the synergy between the new coaching staff, which also includes former Bournemouth manager Sean O’Driscoll, is strong.

The Scot said: “We are getting to know each other. Day by day it is getting better, the dynamic is getting closer. When the heat is on you tend to come even closer. As far as I can see it is working well and I am enjoying it.”

Having not won since August, McAllister accepts it is time for the team to step up and believes Wednesday’s Capital One Cup third-round tie against League Two Carlisle could provide the perfect springboard.

McAllister, speaking at a press conference to preview the game on Rodgers’ behalf, said: “We need to give the fans something to shout about. It is ideal to get a little run going.

McAllister knows all about the worth of the League Cup having been a member of the Liverpool side that won it in 2001 and then kicked on to follow up with FA Cup and UEFA Cup successes.

He said: “Winning it, that was the start. In the early rounds you gather momentum and then there is greater belief. It led on to a really good season.”

Changes are likely but McAllister suggested these may be kept to a minimum. He said: “You have got to utilise the players you have got but we have got to get some momentum going as well. We want some stability in the shape and style so it will be similar to the weekend.”

Christian Benteke will miss the game with a hamstring injury but fellow new signing Danny Ings could get a chance up front after scoring off the bench in Sunday’s draw against Norwich.

McAllister said: “It was really refreshing to see his performance. If anyone deserved a goal it was Danny. He has been working his socks off. It is not by fluke, it is by pure hard work that he managed to get that chance and finish it so well.”