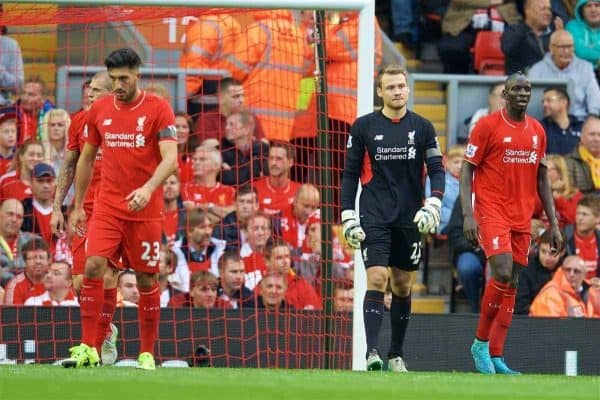 Liverpool drew 1-1 at home to Norwich on Sunday afternoon, and we bring you the best of the morning newspaper reaction to the game.

It’s not exactly been a happy few weeks for the Reds, and the draw with the Canaries was another low point in a season under threat of going to pieces.

Although the performance was actually reasonable for large parts, the finishing was poor and Russell Martin’s equaliser was predictably soft.

Player ratings from #LFC 1-1 #NCFC. Read ours and submit yours.http://t.co/q5UuuSC5zk

Danny Ings‘ second-half cameo was certainly a positive, with the Englishman taking his goal well, but there were some poor displays too. James Milner stands out in that respect.

The draw leaves Liverpool 13th in the Premier League, with Brendan Rodgers under increasing pressure to keep his job.

The Liverpool Echo‘s James Pearce tried to focus on the positives, but bemoaned Simon Mignolet‘s goalkeeping for Norwich‘s goal:

There was a barnstorming cameo from substitute Danny Ings, who endeared himself to the Kop as he opened his account for his new club. There was also the welcome sight of Daniel Sturridge back in a Liverpool shirt for the first time in five months.

Mamadou Sakho and the impressive Alberto Moreno both justified their selections after catching the eye in Bordeaux in midweek.

Once Ings’ neat finish had lifted the anxiety levels inside Anfield early in the second half, the stage was set for Liverpool to go on and deliver the victory Rodgers craved in order to lift the weight of pressure on his shoulders.

But rather than blossom, the Reds shot themselves in the foot. This time Simon Mignolet presented the gift as his weak punch from Robbie Brady’s corner was hooked in by Russell Martin.

Chris Bascombe of the Telegraph believes Rodgers needs to starting emulating Rafa Benitez in terms of grinding out results in must-win matches:

It was the habit of former Liverpool manager Rafa Benítez to stare into the abyss only to secure the victory that edged him back from the brink.

Whenever the hell-fires were raging and a must-win game arrived, his players duly obliged with a safety harness and three points, thus ensuring serenity returned until the next crisis.

It’s a habit Brendan Rodgers needs to learn sooner rather than later after Liverpool’s winless run extended to five games against Norwich City. The failure to secure three points was hardly worthy of pushing him over the precipice, but it still keeps him in a precarious position seeking a momentum shift.

Rodgers needed a performance and craved a positive result following successive league defeats. This turned into an inconclusive afternoon as he oversaw the former but not the latter. But for a series of wasted chances and the customary defensive error – this time from Simon Mignolet – he’d have been in a position to argue the early season hysteria was misplaced.

Paul Joyce of the Express highlighted how far Liverpool have fallen by looking at how dominant they used to be against Norwich:

Where Brendan Rodgers could once count on these same opponents being routinely swatted aside, usually courtesy of a Luis Suarez hat-trick amid his team’s slick and incisive approach, here the visitors were spared a spanking, allowed to clamber off the canvas and even bite back.

Norwich used to be whipping boys. Rewind to April 2014 and the teams’ last meeting and Rodgers’ side had moved five points clear at the summit with three to play, a first league title in 24 years apparently within touching distance.

They awake this morning listless in 13th place and as far off mounting a challenge as at any point in a quarter of a century. It was not supposed to be like this.

Liverpool could even count on the return of another striking talisman yesterday but, while Daniel Sturridge would bring a new dimension to their play according to the manager, it was an inability to shake bad old habits which reared.

The Guardian‘s Andy Hunter was impressed by the returning Daniel Sturridge, but lamented the Reds’ ability to kick on:

Sturridge’s first start since 8 April and the overdue selection of Mamadou Sakho in place of Dejan Lovren enthused the home crowd more than Liverpool’s first-half display. Despite his touch being inevitably rusty after so long out, Sturridge’s pace and movement brought more intent to Liverpool’s game.

Liverpool were slow in possession until the introduction of Ings for Christian Benteke, nursing a tight hamstring, sparked some urgency. Ings’ running and alertness suited the home side’s approach better than their £32.5m summer signing from Aston Villa and, within three minutes of entering the fray, the former Burnley forward had his first Liverpool goal.

It should have been the platform that Liverpool craved. Instead they handed Norwich an equaliser when Mignolet made a hash of dealing with a Brady corner and allowed Martin to atone for his earlier error.

ESPN‘s Richard Jolly was impressed by Ings, and feels he may be underrated by many:

It would be an exaggeration to call Danny Ings the forgotten forward at Anfield. At times, however, he feels like an overlooked, underappreciated attacker. After Liverpool signed him in the summer, they bought a costlier striker in Christian Benteke. Ings was an unused substitute in their first two games of the season. His debut came in a 3-0 defeat, his first start on the left wing.

Had he not scored against Norwich, his participation may have been ignored. But on Daniel Sturridge‘s comeback, Ings opened his Liverpool account. Yet with Russell Martin scoring a still better goal, Brendan Rodgers was denied a victory to ease the pressure on him and improve the mood among the fan base.

Since winning their first two league games, Liverpool’s past four have produced two points and two goals. Both are unsatisfactory tallies, even though Ings improved the latter within three minutes of his introduction.

He was, as he often looked for Burnley, razor-sharp.