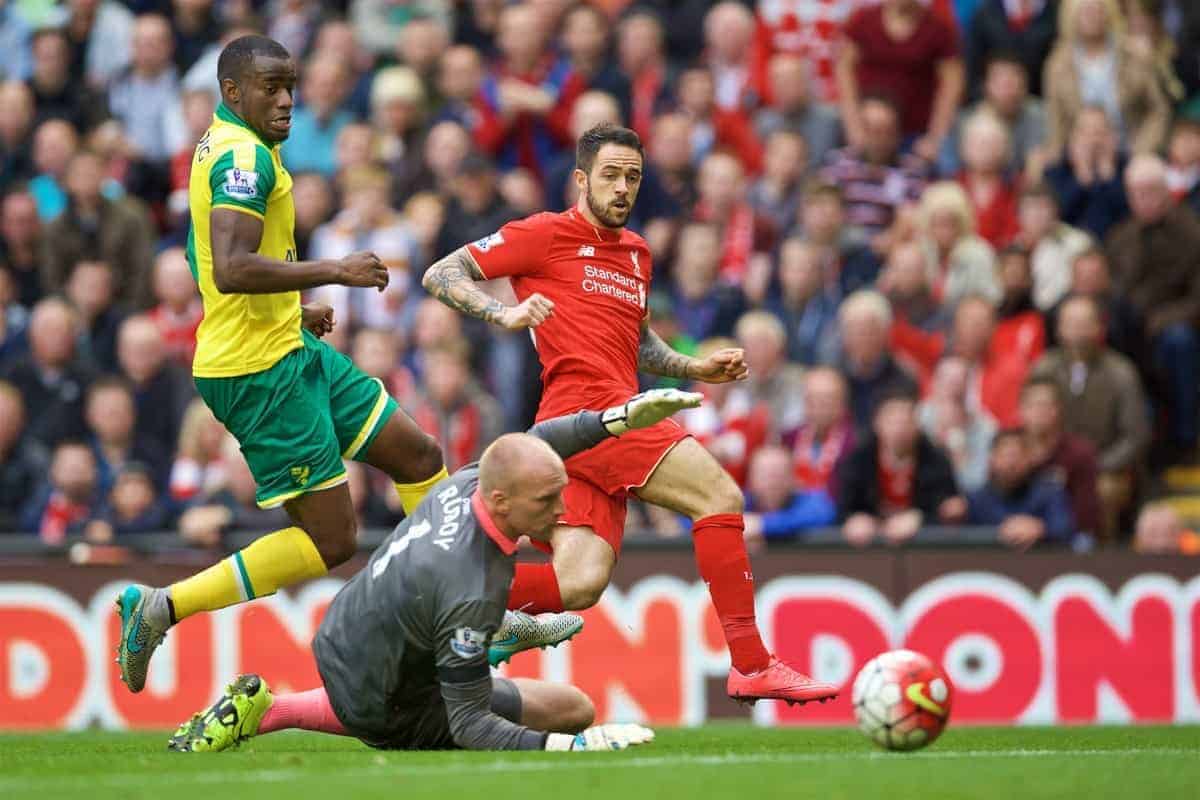 Liverpool drew 1-1 with Norwich on Sunday afternoon, as Danny Ings‘ first Anfield goal was cancelled out by a Russell Martin strike.

Brendan Rodgers unsurprisingly made a number of changes to the side that drew with Bordeaux in the Europa League on Thursday, but there were two noticeable players in the starting line-up.

Mamadou Sakho kept his place following a brilliant display in France, coming in for Dejan Lovren, while Daniel Sturridge made his first start after five months out injured. The Englishman’s return could be massive for the Reds.

Rodgers went with the 3-4-1-2 diamond formation with Sturridge alongside Christian Benteke and Philippe Coutinho behind. Emre Can started at centre-back.

Alberto Moreno started at left-back in place of Joe Gomez, while Roberto Firmino had to settle for a place on the substitutes’ bench. James Milner almost won an early penalty for Liverpool, but referee Anthony Taylor was correct in not awarding the spot-kick.

It was a rather flat start to proceedings, however, with Norwich enjoying as much of the ball as the hosts. The addition of Sturridge did give the Reds an bit of extra zip to their play though.

Milner’s effort was blocked by Robbie Brady 17 minutes in, following terrific work down the left by the impressive Moreno, while a poor Sturridge touch in a dangerous position highlighted his rustiness.

Nathaniel Clyne skimmed a low effort wide of the post, but neither Simon Mignolet or John Ruddy were forced into a save in the opening half hour.

Sturridge had a brilliant chance to make it 1-0 soon after, but the Englishman again showed his lack of match practice with a tame finish when through on goal.

At half-time it was goalless, but Liverpool had started to create chances after a slow start. Ings replaced the injured Benteke at half-time, as the Reds looked to push on and earn three much-needed points.

The Canaries started the half confidently, with youngster Nathan Redmond firing a shot over the crossbar from range.

Ings put Liverpool 1-0 up in the 48th minute with an expertly-taken effort, following good pressing by Lucas and a terrific through-ball from Moreno.

The nerves were eased around a joyous Anfield, as Ings celebrated his first home goal for Liverpool. The 23-year-old then almost played in Sturridge, with the English duo looking lively in attack alongside one another.

Coutinho bent a shot wide of the Kop net after 55 minutes, while Steven Whittaker missed the target for Alex Neil’s side.

On the hour mark, Russell Martin equalised for Norwich, finishing well from close-range following a corner. Rodgers’ men had it all to do again.

Norwich were looking for the kill, and Mignolet did brilliantly to deny Matt Jarvis. Adam Lallana had replaced a tiring Sturridge just prior to that.

Firmino replaced Lucas with 20 minutes left on the clock, and the Brazilian almost scored immediately from a tight angle.

Coutinho missed a wonderful chance when in on goal, but Ruddy saved well to deny Liverpool’s young maestro. A pass to Ings was a far better option than shooting.

Ings had the Reds’ last real chance of note but ran out of space, and as the final whistle blew, Rodgers will have been well aware that he is now under even more pressure after yet more dropped points.