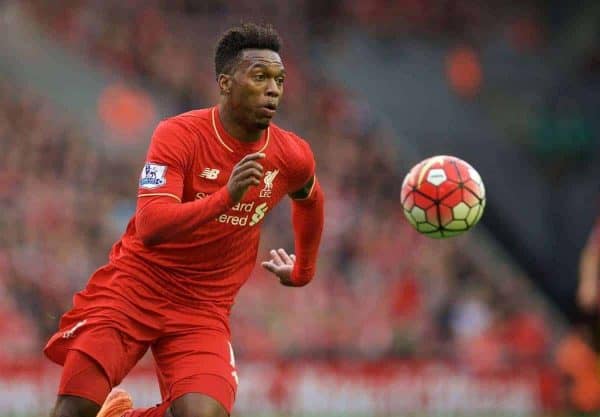 Daniel Sturridge made his first Liverpool start in five months in Sunday’s 1-1 draw with Norwich City, and here Jack Lusby analyses his performance.

Daniel Sturridge was a surprise inclusion in Brendan Rodgers’ starting lineup for Sunday’s 1-1 draw between Liverpool and Norwich City, and in his 62 minutes on the pitch at Anfield the 26-year-old produced an encouraging display.

After spending almost six months on the sidelines with a hip injury, Sturridge was fielded alongside Christian Benteke in Rodgers’ two-man attacking line.

Though it took a second-half goal from Danny Ings to put the Reds ahead, before Russell Martin scored the equaliser, Sturridge’s contribution was promising.

It was a sign of better things to come from Liverpool’s No. 15.

“When he can stretch teams like he can with his pace, and you put Christian beside him and Coutinho behind that or beside him, it’s a really exciting dynamic,” Rodgers told reporters before Sunday’s clash, relishing the prospect of Sturridge making his return.

“We’ve been waiting for that for quite a period of time.”

Much of Sturridge’s success at Liverpool has been built around his intelligent, dynamic off-ball movement, with his pacy runs off the shoulder of defenders and between the lines tailor-made for the Reds’ attacking system.

With Benteke worryingly isolated in attack in the first five games of the season, deploying a striker of Sturridge’s attributes was essential against the Canaries.

Happily, the former Chelsea man didn’t disappoint, recovering from a rusty start to produce a flowing performance ahead of the penalty area, as well as drifting into wide areas.

Benteke’s aerial prowess is well documented, as is Rodgers’ failure to utilise it to date, but Sturridge quickly struck up an understanding with his more physically endowed strike partner.

His ability to read promising situations and act instinctively almost saw him played in by a Benteke header on 21 minutes, with his swift movement into space banking on the quality of the Belgian’s delivery.

Philippe Coutinho‘s attempted through ball on 24 minutes looked to make use of more intelligent movement by Sturridge, but with Norwich manager Alex Neil setting his side up in a compact 4-1-4-1 formation, the Brazilian’s pass was easily snuffed out.

The Reds were forced to wait for an individual error from Norwich captain Martin before they were able to carve open their first clear-cut opportunity.

With the Scotland international gifting Coutinho possession, the No. 10 threaded the ball towards an impressive Lucas Leiva, whose slightly undercooked through pass found Sturridge in acres of space on the edge of the Norwich penalty area.

Unfortunately, arguably due to his lack of match sharpness, Sturridge took the shot on first time, attempting to wrap his foot around the ball and curl beyond goalkeeper John Ruddy instead of driving towards goal for an easy finish.

These lapses in quality and concentration will be ironed out with more game time, as will Sturridge’s understanding with Benteke and fellow summer arrival Ings, but his work getting into dangerous areas alongside his strike partners, as well as Coutinho – who operated in his natural No. 10 position in Rodgers’ 3-4-1-2 – was promising.

Fundamentally, it was encouraging to see Liverpool flood the Norwich penalty area with attackers, such as on 35 minutes as Coutinho, Benteke and Sturridge looked to latch onto Lucas’ deep cross—with the Brazilian ultimately heading wide.

Furthermore, on Ings’ introduction—replacing an injured Benteke at half-time—Sturridge supported the former Burnley man with diligent parallel runs, finding himself in position for a tap-in on 48 minutes and then four minutes later.

The first instance saw Ings instead convert for Liverpool’s opener, while in the second instance the 23-year-old’s cross was diverted into the path of Ruddy by a Norwich defender.

It would be easy to oversell Sturridge’s influence off the ball on Sunday, but he signalled his intent with a clutch of strong supporting movements.

The striker’s work in possession provided Rodgers with another useful creative option, too.

While Benteke could be criticised for his paltry contribution to buildup play at Anfield on Sunday, Sturridge kept himself busy, with a hand in a host of promising moves.

In the absence of former strike partner Luis Suarez, Sturridge will be required to take on a more focal creative role.

His partnership with Suarez often saw the Uruguayan dropping deeper to influence play, with Sturridge instead spearheading moves, but with Benteke typically operating as a pivot at the forefront of Rodgers’ attack, Sturridge was required to drift.

This saw him loft a ball into the path of an overlapping Coutinho on seven minutes, with the Norwich defence fortunate to read the move and intercept.

But, as is the former Aston Villa striker’s wont, he strayed into an offside position.

Coutinho, tasked with less attacking responsibility within the 3-4-1-2 setup, found himself on the receiving end of Sturridge’s creative talent twice more, too—once at either side of the interval.

Firstly, a nicely weighted through ball almost saw the No. 10 into a one-on-one encounter with Ruddy, but Martin was well positioned to make the block.

Then in the second half Sturridge found Coutinho, after making a smart turn towards goal, with another inspired flick.

With Coutinho experiencing something of an off-day, however, Sturridge will have been disappointed to see the attacking midfielder curl his effort wide of Ruddy’s upright.

Coutinho found the target with just two of his 10 attempts on goal on Sunday.

However, while Sturridge’s intent in possession can once again be lauded, his overall contribution to buildup play, and on the ball in general, highlighted his lack of sharpness.

The striker completed just 70.8 percent of his attempted passes before he was replaced by Adam Lallana just after the hour mark—the least of any Liverpool player.

As with Liverpool’s overall performance, Sturridge’s 62-minute display at Anfield on Sunday highlighted the returning striker as a work in progress.

A Work in Progress

“I felt it was important to get him on the field and he did well for the hour he played,” Rodgers said after the game, praising Sturridge’s performance.

“He’s still a way off his full fitness, but his presence and stature in the game will always give us hope because he’s got big quality. It’s just about games for him and building his fitness—and there’s no pressure for him to do that.”

As the manager rightly points out, this was a player making his first appearance for the club since April, and his performance wasn’t devastating.

His touch was often heavy, his choice of pass wasn’t always the best and, as mentioned, his failure to convert his first-half opportunity was a pivotal moment in this ultimately deflating stalemate.

But, aided by the likes of Ings, Lucas, Alberto Moreno, Nathaniel Clyne Mamadou Sakho and Emre Can, who all turned in impressive performances at Anfield, this was a performance of great promise.

Rodgers’ switch to a 3-4-1-2 for Sunday’s draw was also encouraging, with his side offering more in terms of attacking thrust—despite the individual failures of Benteke, Coutinho and James Milner.

Liverpool proved that, in time, they can coalesce into a successful attacking unit, and this can only be furthered by the continued rehabilitation of Sturridge.

Possessing the ability to spearhead Liverpool’s attacking improvement, Sturridge’s return came at the optimum moment for an under-fire Rodgers.

As his promising performance against Norwich proved, when Sturridge hits full fitness and gets to grips with his on-field relationship with Benteke, Rodgers will have a truly scintillating attacking option at his disposal.