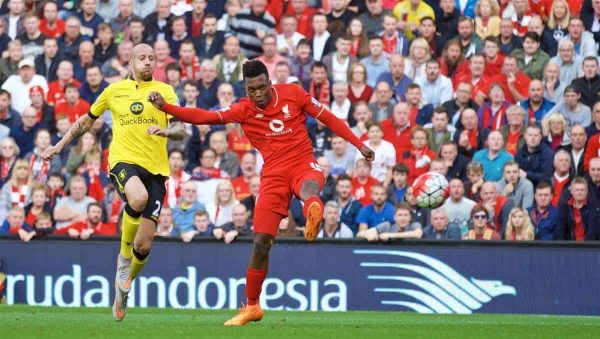 Liverpool earned a precious three points at home to Aston Villa on Saturday, and we round up the best newspaper reaction from the match.

There was something about the performance and the Anfield atmosphere that made it all feel a little like the unforgettable 2013/14 campaign, without going overboard.

Daniel Sturridge‘s brilliant double and a second-minute James Milner strike were enough to see the Reds home, although Rudy Gestede’s two goals kept the home fans on their toes.

Brendan Rodgers needed this victory hugely, and while his job is still very much on the line, more of this in the coming weeks certainly won’t do him any harm.

Here is how some of the country’s top journalists saw the game.

Andy Kelly of the Liverpool Echo understandably heaped praise on Sturridge, and highlighted the fact he is still not even remotely close to full fitness:

Let’s make it clear. Daniel Sturridge doesn’t look fit. Indeed he looks as far from fitness as he ever has on any of his previous comebacks.

The fact he can still score two sublime goals and prove the match winner is just further evidence of the incredible value a natural goalscorer can provide to a team.

It’s why they cost the big bucks – it’s not “rocket science” as Brendan Rodgers said afterwards. Liverpool are ‘managing’ Sturridge’s return – with just one appearance a week for now it seems – but to be honest there didn’t seem a lot to manage in the first period.

A goal changed everything, a lovely volley with the outside of his left foot. He’s always at his best when he hardly looks to be trying. Suddenly he was a man transformed.

He looks miles away from where he needs to be – just imagine what he might do when he gets there.

The Telegraph‘s Jason Burt was another who lauded the 26-year-old, with the striker’s match-winning performance coinciding with Liverpool finally scoring more than one goal in a game this season:

Rodgers’ – and Liverpool’s cause – were aided by that but, far more significantly, there is the return of Daniel Sturridge who started his second successive league game since recovering from his hip problem and claimed his first goals since March.

This was also the first time Liverpool had scored more than one goal in a game since May – and the first time they had struck three since Sturridge launched a comeback in February and Tottenham Hotspur were defeated.

Sturridge is outstanding and if he can remain fit and with him showing signs of developing a strike partnership with Danny Ings then there are firm foundations for hope for Liverpool. It remains a big ‘if’ for the 26-year-old – it has to be, given his injury record – but his presence can be transformative.

The Mail‘s Dominic King focussed on Rodgers and his rather spiky post-match press conference:

There was no sign of joy at the end, just some handshakes with the opposing bench and a wave to Director’s Box before he scuttled down the tunnel.

This might have been a timely win of the last 12 months for Brendan Rodgers but he was in no mood to celebrate. After a week in which the spotlight on his position has been shining brighter than ever, Liverpool’s manager could have been forgiven had he simply wanted to puff out his cheeks.

Instead, after Daniel Sturridge inspired a 3-2 victory over Aston Villa, Rodgers went on the attack. Having kept his counsel while Jurgen Klopp and Carlo Ancelotti were linked with his job and former Liverpool defender Mark Lawrenson said he should be sacked, he waited for the right moment.

This was not an emotional rant or the words of someone who had lost control. Rodgers was measured and calm, just as he had been on the touchline throughout the game even when it seemed that Liverpool would make heavy weather of dispatching inferior opponents.

What he cannot fail to accept, however, is the scrutiny has not come because of a patchy start to the campaign. It has built up over a 12 month period and stems from results such as failing in the Champions League, getting thrashed 6-1 at Stoke and being bullied out of the FA Cup at Wembley.

Tim Rich of the Independent felt it was the Reds’ standout performance of 2015/16 so far, but is unsure whether it will act as a turning point or not:

For Brendan Rodgers, this may have been a stay of execution or it may be a turning point but, whatever it was, this was far and away Liverpool’s best performance of a fraught start to the season. The journey towards the gallows so many had erected for him had begun with an utterly insipid defeat by Aston Villa in the FA Cup semi-final last season and it might have been appropriate if it had ended here.

Whether this win, full of fine forward play and dreadful defending, puts an end to the crisis, only time will tell. Liverpool’s next game is the Merseyside derby and Rodgers (pictured) is under no illusions.

In his ESPN player ratings, David Usher was unimpressed with Emre Can, but very complimentary of Milner and Lucas Leiva:

Can – A poor display from the young German who was beaten by Jack Grealish a couple of times early on and never really looked comfortable after that. His passing was occasionally erratic and he was caught out badly for Villa’s opening goal when he allowed Gestede to run in front of him for a tap in. May soon find himself under real pressure for his place from Joe Gomez.

Lucas – Kept things ticking over nicely in the first half but really came into his own after Villa pulled it back to 3-2. With nerves beginning to set in among the crowd and some of his teammates, the Brazilian did more than anybody to calm those nerves with a series of timely interceptions, tackles and sensible use of the ball. An excellent performance.

Milner – Used further forward than usual and it paid off as the skipper opened the scoring in the second minute with a crisp low drive. He then turned provider to play in Sturridge for the second goal and showed his experience late on by spurning a crossing opportunity, instead taking the ball to the corner to waste valuable seconds and help his side secure the three points.