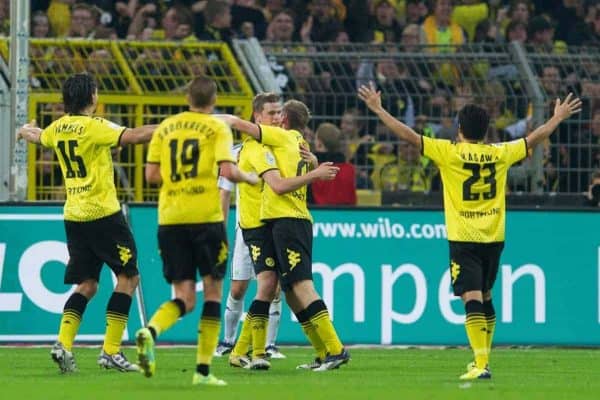 With Liverpool linked with some big-name targets under new manager Jürgen Klopp, we look at how he performed in the transfer market at Borussia Dortmund.

The 48-year-old may only have been in the Anfield hot-seat for a matter of days, but he is already being linked with bringing some of his former Dortmund players to Merseyside.

Brendan Rodgers’ time in charge will always be remembered for the vast sums of money spent despite a lack of successful signings, and Klopp will be under similar scrutiny to perform in that respect.

It will be intriguing to see how he fares.

The German achieved wonderful success during his seven years with Dortmund, but how did he perform in the transfer market?

Signed from Japanese side Cerezo Osaka in the summer of 2010, Shinji Kagawa was a complete unknown when he arrived in Germany.

He became an instant success story under Klopp, however, enjoying two tremendous seasons with Dortmund prior to his exit in 2012.

Blessed with great technical quality and a shrewd footballing brain, Kagawa wreaked havoc in his No.10 role, scoring 29 goals in 71 appearances for BVB, and assisting many more.

Having failed at Man United – mainly due to being played inexplicably out of position by both Sir Alex Ferguson and David Moyes – Kagawa made an emotional return to Dortmund in 2014, for a bargain £5.6 million, where he remains a key man.

Lukasz Piszczek was brought in from Hertha Berlin during the same time as Kagawa, and was another who very few knew much about.

The Pole had been moulded into a right-back at his former club, having initially shone as a winger, and he immediately made an impression at Dortmund.

His attacking qualities came to the fore under Klopp – he linked up brilliantly down the right with compatriot Jakub Blaszczykowski – but defensively he was also rock solid.

Piszczek has matured into one of Europe’s finest right-backs over the last five years, and was an integral part of the Dortmund side that won back-to-back Bundesliga titles and reached the 2013 Champions League Final.

Like a number of players mentioned above and below, it’s vital to stress that Robert Lewandowski was far from the superstar he is today when he joined Dortmund for £3.33 million. This is where Klopp deserves huge credit.

The Poland striker made his way to Germany from Lech Poznan in 2010 – Blackburn had nearly signed him two years earlier – and it wasn’t long before he fired his side to success.

Nine goals in his first season was a modest return, even though Dortmund still won the league, but he found the net 94 times in the three years that followed.

Robert Lewandowski scores his 13th goal of Euro 2016 qualifying, no player has ever scored more in a campaign. pic.twitter.com/pl7DrHWsBg

He destroyed Bayern Munich almost single-handedly in the 2012 German Cup Final, scoring a hat-trick, while his four goals against Real Madrid in the 2013 Champions League semi-final first-leg were equally remarkable.

Lewandowski joined Bayern on a free transfer last year, where he has continued to flourish. There is an argument to say that he is the world’s best striker on current form.

Signed by Klopp on loan at the age of just 19 in 2008, Mats Hummels eventually joined on a permanent deal from Bayern a year later, for just under £3million.

The classy centre-back came of age at the start of this decade, forming a terrific partnership with Neven Subotic and playing with a confidence that belied his tender years.

Hummels was key to Dortmund’s success under Klopp, both domestically and in Europe, and he outlined his pedigree by winning the 2014 World Cup with Germany.

Still only 26, Hummels has gone from Bayern reject to one of the most sought-after defenders in world football. Once again, Klopp worked wonders in terms of his development.

Ilkay Gundogan is one of several Dortmund players who have been linked with a move to Liverpool in recent days, and it’s not difficult to see why he would be a great acquisition.

The hugely talented midfielder was a £3.85 million arrival from Nuremberg in 2011, but despite his ability, he was not seen as a particularly big coup at the time.

He impressed from the off, however, and his influence on the team grew and grew as Klopp’s side won their second consecutive Bundesliga title in Gundogan’s first season at the club.

Lewandowski, Reus, Gundogan, Hummels and Subotic all linked already. It's going to be a long 3 months. #LFC

The German equalised against Bayern from the penalty spot in the Champions League final a year later, and although Dortmund lost 2-1 on the night, the youngster impressed in front of the watching world.

Gundogan had horrific luck with injuries in 2013/14 and for part of last season, so Klopp never saw the best of him during the end of his reign at Signal Iduna Park, unfortunately. He is back to his best now though.

Subotic was just a teenager when he cost Dortmund £3.15 million – proof that he was highly rated – but he has gone on to justify that price tag and more.

The Serb’s form has not been always been the best since 2013 though, and some feel a move to Anfield to work with Klopp again would give the 26-year-old a new lease of life.

Having spent part of his youth career at Dortmund, Marco Reus joined Borussia Monchengladbach in 2009, spending three years there.

Klopp and the club realised the error of their ways though, and re-signed the German for just under £12 million in 2012.

Since then, he has matured into one of Europe’s finest attacking players, scoring and assisting at a rapid rate from his roaming wide role.

59 goals in 128 appearances is a tremendous return from the 26-year-old, and if Klopp could work his magic and bring him to Liverpool, the Germany star would have an enormous impact in the Premier League.

Reus wasn’t cheap, but he is now worth three times what Dortmund paid for his services.

Henrikh Mkhitaryan flirted with the idea of joining Liverpool in the summer of 2013, but Klopp managed to lure the Armenian to Dortmund for £19.25 million instead.

It was a signing that showed real intent from the 48-year-old, as he looked to replace the departed Mario Gotze – but Mkhitaryan never really set the world alight under Klopp.

13 goals in 46 games was a decent return in his first season, in fairness, but just four in 41 last year was a major reason for Dortmund’s slump, especially as he failed to step up to the plate in the absence of the injured Reus.

The 26-year-old has been fantastic under new BVB boss Thomas Tuchel so far this season, but he is a rare case of someone not find their top level under Klopp.

Pierre-Emerick Aubameyang was another relatively big-money buy in the summer of 2013, particularly by Klopp’s standards, joining for £9.1 million from Saint-Etienne.

The Gabon international may not have always excelled during his time with Germany’s second-biggest team, but he definitely has to be considered a success.

Effective as either a striker or a winger, the speedy 26-year-old scored 42 goals in 94 games under Klopp, and was a rare positive in Dortmund’s dreadful 2014/15 campaign.

He has come flying out of the traps this season too, finding the net 14 times already. How much Klopp improved Aubameyang as a player is certainly up for debate.

Ciro Immobile is, without doubt, the most failed of Klopp’s many signings as Dortmund manager, when you take everything into account.

The Italian cost £12.95 million from Torino in 2014, and was signed as the man to replace Lewandowski – it didn’t quite pan out like that, however.

Immobile scored just three times in 24 Bundesliga appearances in 2014/15, and never really looked like cutting the mustard at any point.

The 25-year-old has been loaned out to Sevilla this season, and it is difficult to see him having much of a future at Dortmund.

It is a purchase Klopp will want to forget.

What the above information shows is that Klopp worked wonders in the transfer market on the whole, especially when it came to developing young players.

He signed the likes of Lewandowski, Reus, Hummels and Gundogan when they were either in or barely out of their teens, and helped make them the world-beaters they are today.

Interestingly, the German has been more inconsistent with his big-money buys, with Mkhitaryan, Aubameyang and Immobile all hit-and-miss purchases in comparison to those who cost less.

It is worth stressing that these decisions haven’t always been solely down to Klopp. Far from it.

He worked within a similar structure at Dortmund as FSG have implemented at Liverpool, so there are others who also deserve praise for the work they did in bringing the aforementioned players to the club.

Klopp has thrived most when he hasn’t actually had to spend big, so it will be intriguing to see how he fares with a probable large amount of money to spend at Anfield in the coming years.

While we should all be massively impressed by the German’s great transfer prowess, a few errors along the way show that he is not invincible.

All transfer fees courtesy of TransferMarkt.co.uk.