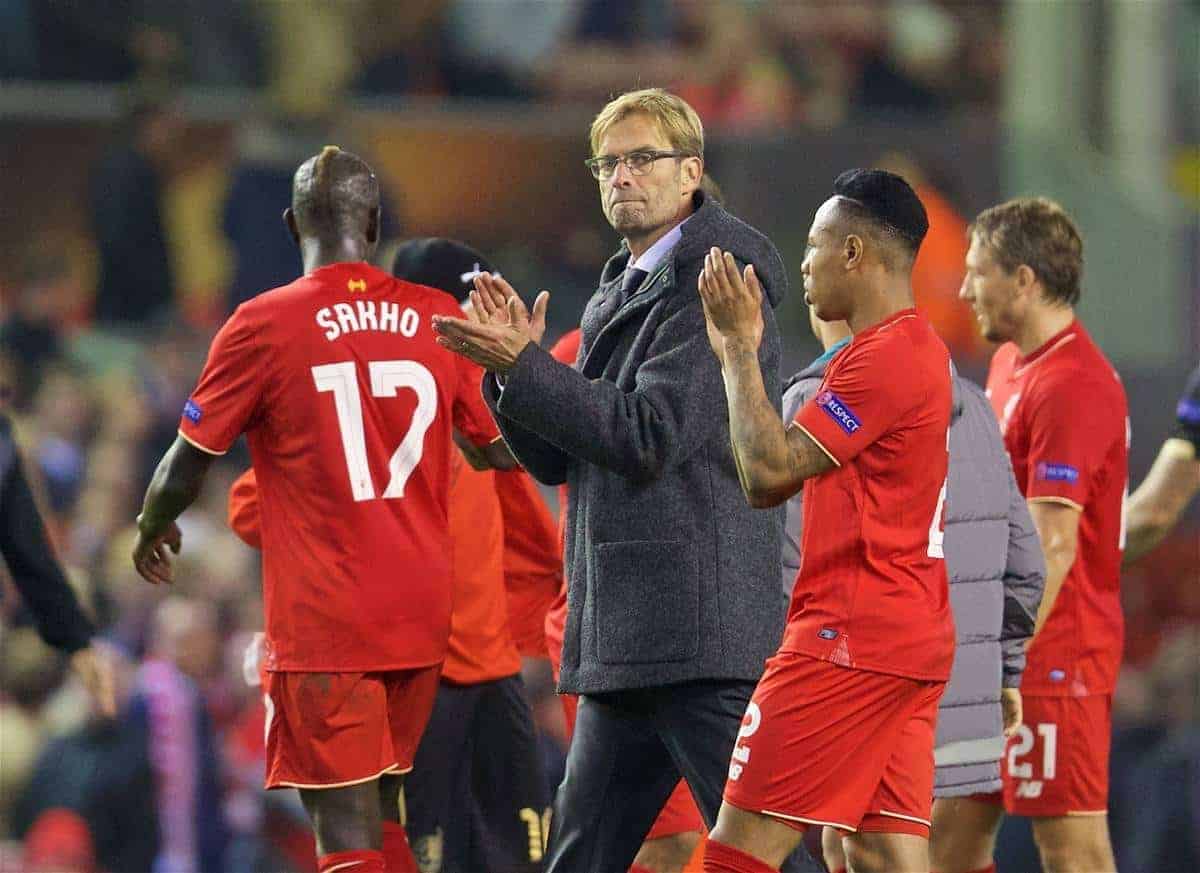 Liverpool were held to a third consecutive 1-1 stalemate on the European stage by 10-man Rubin Kazan, on a night of real frustration for Klopp’s home debut.

The Reds fell behind to a fantastic finish from Marko Devic after 15 minutes, before Emre Can equalised, bundling home from close range a minute after Rubin saw captain Oleg Kuzmin’s dismissed for two yellow-card offences.

Christian Benteke hit the post in the second half with Adam Lallana seeing a well-struck effort saved as Klopp’s men pushed for a winner, but it wasn’t to be the dream Anfield debut for the German.

Here are five talking points from the draw. The Brazilian magician has endured a poor start to the season, and his disappointing form continued with an ineffective display against the Russians.

Coutinho looked sluggish during the first 63 minutes and aside from one sharp effort after a clever turn during the second half, he was far from his normal self, with his touch evading him too often – shown as he registered the joint-most unsuccessful touches the Reds on the night (three).

The 23-year-old’s usually reliable radar was out of sync, and as his frustration mounted he held onto the ball for too long, being robbed of possession three times – also the joint-most on the night – contributing to the breakdown of attacking play when Liverpool needed quick passing and movement in the final third.

It was a night of real sloppiness from Coutinho, and he needs to find form quickly as Klopp looks to turn the season around.

On a night that lacked many positives, Sakho was unquestionably one of them – as he turned in yet another faultless display.

The Frenchman continued his outstanding recent form, dealing expertly with everything that came his way – despite Kazan being down to 10 men for two-thirds of the game – providing a composed but commanding figure at the heart of Klopp’s defence.

Sakho’s effortlessness at the back provides such reassurance and solidity down the left side, from where the France international won more aerial duels than anyone on the night (13) and sprung attacks with his typically incisive distribution, setting the Reds on their way more than once.

It’s hard to believe Sakho has played second fiddle for as long as he has, and he proved once again why he must be the man to build the defence around as Klopp moves forward.

On what was a frustrating night for Klopp’s side, there was a concerning lack of creativity in open play.

The Reds were too predictable from too early on, lacking any real chemistry or penetration in the final third, which made life all too easy for the resilient 10-man visitors.

Klopp’s men lacked forward bodies, which slowed attacks, with too few options to break down the stubborn Kazan defence, leading to the Reds going wide too often, with far too many – 42 – unproductive crosses being lobbed into the box out of desperation.

Short, sharp passing, one-twos and darting penetrative runs were all non-existent for the most part – and for the second game running, you found yourself questioning where a goal was going to come from.

It is only early days but there is plenty of work to do for Klopp to improve the Reds’ goal threat.

One positive from a flat night at Anfield was the return to action for injury absentees Roberto Firmino and Christian Benteke.

Though neither could provide the moment of inspiration – the Belgian went close when he hit the post with a curling effort – the availability of the returning duo, who both looked sharp, undoubtedly hands Klopp a huge boost as he looks to transform the Reds’ fortunes.

With Daniel Sturridge also nearing a comeback and possibly ready to take part against Southampton on Sunday, the attacking options at Klopp’s disposal already look far healthier – which will hopefully now help to improve the currently sluggish attacking play.

While there’s work to do to correct deficiencies and improve, having first-choice options back available will undoubtedly help that process.

Jurgen Klopp Woken to the Scale of the Task Ahead

It wasn’t the memorable night hoped would transpire, nor a disaster, but it was one that provided a brutal reality check for the new boss over the magnitude of the challenge that lies ahead.

A frustrating third consecutive 1-1 draw does nothing to spark a labouring European campaign into life, with the Reds now trailing group leaders FC Sion by four points.

The lack of quality in performance on another big occasion at an expectant Anfield transpired all too familiarly – and freezing under the intense spotlight yet again is something that will undoubtedly have to improve quickly if any progress is to be made.

Another lacklustre showing with a strong team left the Reds found wanting, not for the first time, against a team that should have been disposed of with relative ease.

A real shortage of quality in the squad beyond first-choice options was also hammered home once again – another of the mounting issues Klopp will have to address as he moves forward.