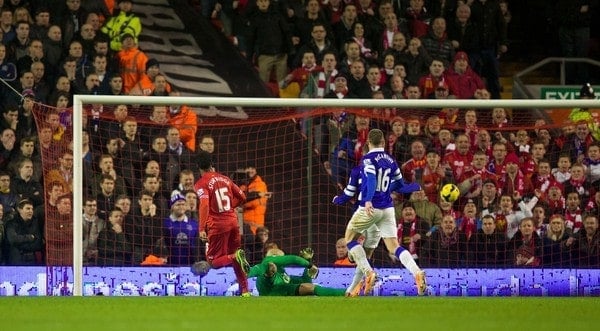 Liverpool do battle with Everton in the 225th Merseyside derby on Sunday lunchtime, and we select our combined XI between the two sides on current form.

Clashes between the pair are invariably unforgettable occasions, if you forget last season’s abysmal 0-0 draw, and this weekend’s showdown should be no different.

Everton will be feeling confident of earning a rare victory over the Reds, with Roberto Martinez’s side buoyant following their dramatic 3-2 win at West Brom on Monday.

Brendan Rodgers will be well aware of how important the game is in terms of his job, and both the manager and his players need a big performance at Goodison Park.

The question is: who makes an Everton-Liverpool combined XI on CURRENT FORM? Here are our selections.

(Note: Players currently out with injury are not included)

Choosing between Simon Mignolet and Tim Howard isn’t exactly like opting for Manuel Neuer or David de Gea, with both goalkeepers far from the most reliable in the business.

Mignolet just gets the nod, however, but there really isn’t much in it. The Belgian’s shot-stopping ability gives him the edge, with Howard also arguably prone to more errors.

It is an area of the pitch where the two Merseyside rivals could definitely improve in.

Nathaniel Clyne vs. Seamus Coleman is a tricky one, but when you look at their importance to the team, Coleman is the more superior.

The Republic of Ireland international is a constant attacking outlet down the right, bringing a steady number of goals and assists each season, but he is also a very solid defender.

Clyne has made a good start to life at Liverpool, but he has not yet been good enough in an attacking sense to merit making the cut.

John Stones is a centre-back of unbelievable quality and potential, and barring injury, he should develop into one of Europe’s finest defenders in years to come.

The 21-year-old is already a vital player for the Toffees, and his class on the ball, aerial presence and reading of the game are all superb. It is easy to see why Chelsea bid so much for his services.

Martin Skrtel blows too hot and cold to get the nod, and despite being nine years Stones’ senior, is still a more immature player.

While Mamadou Sakho’s form since returning to the Liverpool has been terrific on the whole, Phil Jagielka is having a very fine season after a below-par 2014/15.

The England veteran has been the perfect foil for Stones, bringing experience, consistency and more of a no-nonsense approach at the back.

He has been a top class servant to Everton over many years.

Leighton Baines would clearly be first-choice left-back in this team if he was fit, but as it is, Alberto Moreno is the standout choice right now.

The Spaniard’s form has been sparkling since he ousted Joe Gomez earlier this month, and there are signs that we are starting to see the best of him in a Reds shirt.

Brendan Galloway is an exciting prospect who has impressed at Goodison Park so far this campaign, but he remains a work in progress.

Although at his best as a box-to-box midfielder, much like the injured Jordan Henderson, James McCarthy would do a perfectly good job sitting in front of the defence.

The 24-year-old is one of the first names on Everton‘s team-sheet, and is a classic example of someone who often doesn’t receive the credit he deserves. He could definitely thrive at one of the Premier League‘s top clubs.

Lucas Leiva and Gareth Barry are still good players in their own right, but they lack the legs and influence of McCarthy, and are past their respective peaks. While Henderson would have taken this spot in the team were he fit, James Milner is certainly a very good back-up option.

The 29-year-old has been an impressive addition to the Reds since signing in the summer, barring a few sloppy displays, and his goal against Villa on Saturday was expertly taken.

Milner offers endless running- he has covered more ground than anyone in the Premier League this season- but also an astute footballing brain.

The most naturally talented footballer in either squad, selecting Philippe Coutinho is a complete no-brainer.

The Reds’ brilliant Brazilian has grown and grown in stature since moving to Anfield in January 2013, and is now one of the Premier League‘s best players.

Coutinho’s touch, creativity and eye for the spectacular are all a joy to watch when he is in full flow, and he could well be the key figure in Sunday’s showdown.

Ross Barkley is another player with magnificent ability, and he looks to be coming of age this season.

The Englishman’s decision-making and work-rate are showing signs of maturing, and his physical presence and goalscoring threat from attacking midfield are reminiscent of a young Steven Gerrard.

The likes of Adam Lallana, Roberto Firmino and Jordon Ibe are all failing to ignite in 2015/16 for different reasons, and with Coutinho deeper, Barkley’s inclusion makes complete sense.

The return from injury of Daniel Sturridge has the potential to be season-changing for Liverpool, and their goalscoring talisman has wasted no time in getting back into his stride.

His double against Aston Villa last weekend was majestic, and he offers pace, movement and a constant flow of goals that no other striker in either squad can guarantee.

Danny Ings can think himself a little unlucky not to be included, following a string of very good performances, while Aruna Kone has been equally effective for Everton.

Although Romelu Lukaku can sometimes be guilty of flattering to deceive, he has been superb so far this season, scoring six goals in nine appearances to date.

Match-winning performances against Southampton and West Brom have outlined his ability, and on his day, he has Didier Drogba-esque qualities about him. He can be unplayable.

It is very easy to forget that the Belgium international is still only 22 years of age, and he has a big future ahead of him. He is a better prospect than Christian Benteke.

Combined XIs are always subjective, but do you agree with our selections? Let us know in the comments below.