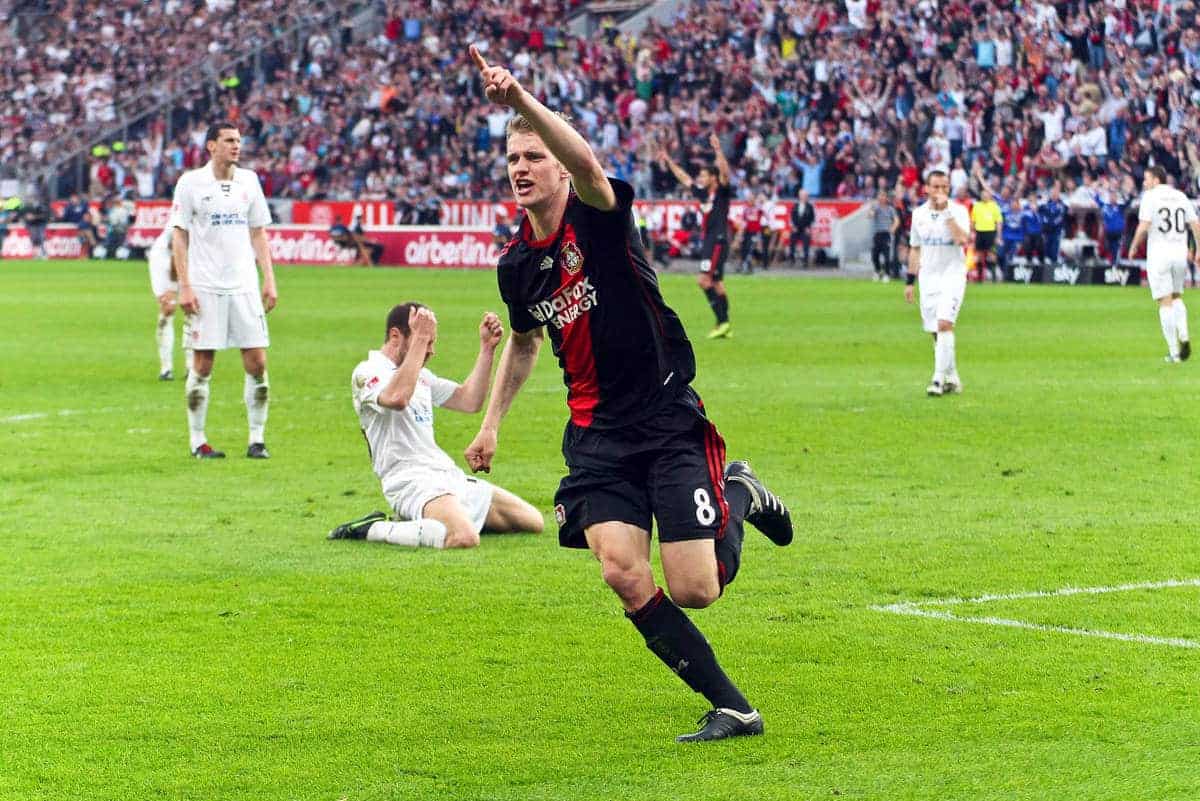 Jurgen Klopp‘s knowledge of the German market could prove invaluable at Liverpool, if he and his staff move for familiar faces in the future. Though Klopp is looking to utilise the perspectives of Liverpool’s transfer committee, his assertion that he would have “the first and the last word” in the club’s future business is telling.

This is a manager who, unlike his predecessor Brendan Rodgers, is happy to both have his say and work alongside the likes of Michael Edwards, Dave Fallows and Barry Hunter.

With Klopp suggesting that he will be proposing targets during his time on Merseyside, the former Borussia Dortmund manager could well look to utilise his knowledge of the German market.

With that in mind, here are five German players who would fit in at Anfield.

The looming vulnerability of Simon Mignolet as Liverpool’s first-choice goalkeeper is one of the key priorities for Klopp to address in his time at the club, and it could be that the German turns to the transfer market to restore strength between the sticks.

At Dortmund, Klopp’s faithful custodian was Germany international Roman Weidenfeller, who joined the club in 2002 to replace Jens Lehmann—who moved to Arsenal the following year.

Arriving as a 22-year-old, Weidenfeller remained Klopp’s No. 1 throughout his reign at the Westfalenstadion, owing to his consistent showings in the Bundesliga and in Europe.

If Klopp is to replace Mignolet with a younger model, he could turn to his former club Mainz and target Loris Karius.

At 6’2″, Karius is a commanding presence in the penalty area; quick off his line and possessing fine reflexes.

Though he is not the most composed in terms of claiming crosses, at 22, he is a malleable prospect, and one which Klopp could develop into a top-level goalkeeper.

Interestingly, Karius is said to be garnering interest from Aston Villa ahead of the January transfer window, but this would be a move below his station.

Who does Klopp employ as partner to Mamadou Sakho in the centre of defence?

Martin Skrtel, Joe Gomez and Kolo Toure represent his current right-sided options, with Gomez being best suited to this partnership in the long term—along with Tiago Ilori, who is currently on loan at Villa.

But if Klopp was to turn to Germany to replace the ultimately flawed Skrtel, a move for Hoffenheim’s Niklas Süle would be advised.

Süle is an aggressive, physically dominant centre-back who forced his way into the first-team reckoning at Hoffenheim at just 17 years old, with his 6’5″ frame allowing him to contend with the Bundesliga’s brutish strikers.

Now 20, Süle has recovered from a serious cruciate ligament injury to reclaim his starting spot, making eight league appearances so far this season.

Süle pairs his strength with a surprising level of pace and a mature understanding of the game, and deploying him alongside Sakho would only improve his tactical intelligence.

If Klopp decides to dip into the market for another centre-back, Süle would allow him to shore up Liverpool’s defensive ranks for at least a decade.

One of the first players to be linked with the club following Klopp’s arrival was Dortmund defensive midfielder Sven Bender, but it is in fact his twin brother, Lars, who should be the object of Merseyside’s desire.

Both came through the ranks at 1860 Munich, before Sven joined Klopp at Dortmund and Lars opted for Bayer Leverkusen—then managed by Jupp Heynckes.

That Heynckes attempted to sign Bender during his time at Bayern Munich is a testament to the 26-year-old’s quality.

Crucially, this comes in a position in which Liverpool are desperately short.

Bender is a prowling, aggressive defensive midfielder who has built his game on a strong intelligence and understanding of play, becoming a useful all-round midfielder during his time in Leverkusen.

He is able to break up play at the base of midfield, much like Liverpool’s current first-choice option Lucas Leiva, but he is also capable of building moves from this deep-lying role.

So far this season, Bender has averaged 5.1 successful tackles, 3.9 interceptions, 1.2 key passes and won 8.9 aerial duels per 90 minutes in the Bundesliga.

At 26, he is entering his prime—and there are few better options for Klopp to shore up his engine room than Bender.

Dortmund midfielder Ilkay Gundogan rather predictably sparked rumours of a reunion with Klopp at Anfield when he praised the 48-year-old’s imminent move to Merseyside at the beginning of October.

While it may seem farfetched at this stage for Gundogan to swap Dortmund for Merseyside, the pulling power of Klopp does make it more likely.

At Dortmund, Klopp saw the 24-year-old as key to his gegenpressing philosophy.

This was due to the Germany international’s intelligence, energy and technical ability, lending himself perfectly to the box-to-box playmaking role in Klopp’s 4-2-3-1.

After recovering from a serious spinal injury in 2013/14, Gundogan made 23 appearances for BVB in Klopp’s final season in charge last term, scoring three goals and making four assists.

Gundogan was the driving force behind Dortmund’s swift, counter-attacking system under Klopp, and he represents one of the most effective all-round midfielders in European football.

Midway through last season, Rodgers described Emre Can as “a Rolls-Royce” player, and while the 21-year-old is a model of class and composure, Gundogan is the midfielder he should aspire to be.

Liverpool are currently lacking in genuine wide options, and a move for Hoffenheim’s Kevin Volland in the future could see Klopp address this.

Able to play all across the forward line, Volland is a pacy, skilful forward who employs direct running and dribbling ability to terrorise Bundesliga defences—with his performances for Hoffenheim earning him his first senior Germany call-up in 2014.

Capable of both starting and finishing attacking moves, Volland has largely been utilised as a right winger in recent seasons—most notably alongside new Liverpool forward Roberto Firmino.

He showed his versatility during Germany’s European Under-21 Championship run this summer, however.

Operating as an off-the-shoulder No. 9, Volland utilised intelligent movement and a keen finisher’s instinct to great effect.

This has continued so far in 2015/16 with Hoffenheim, with the 23-year-old scoring five goals in seven appearances as a centre-forward.

This ability to perform to a high standard in a number of positions would allow Klopp flexibility in attack—but it may be Volland’s proficiency in wide areas that is most useful.