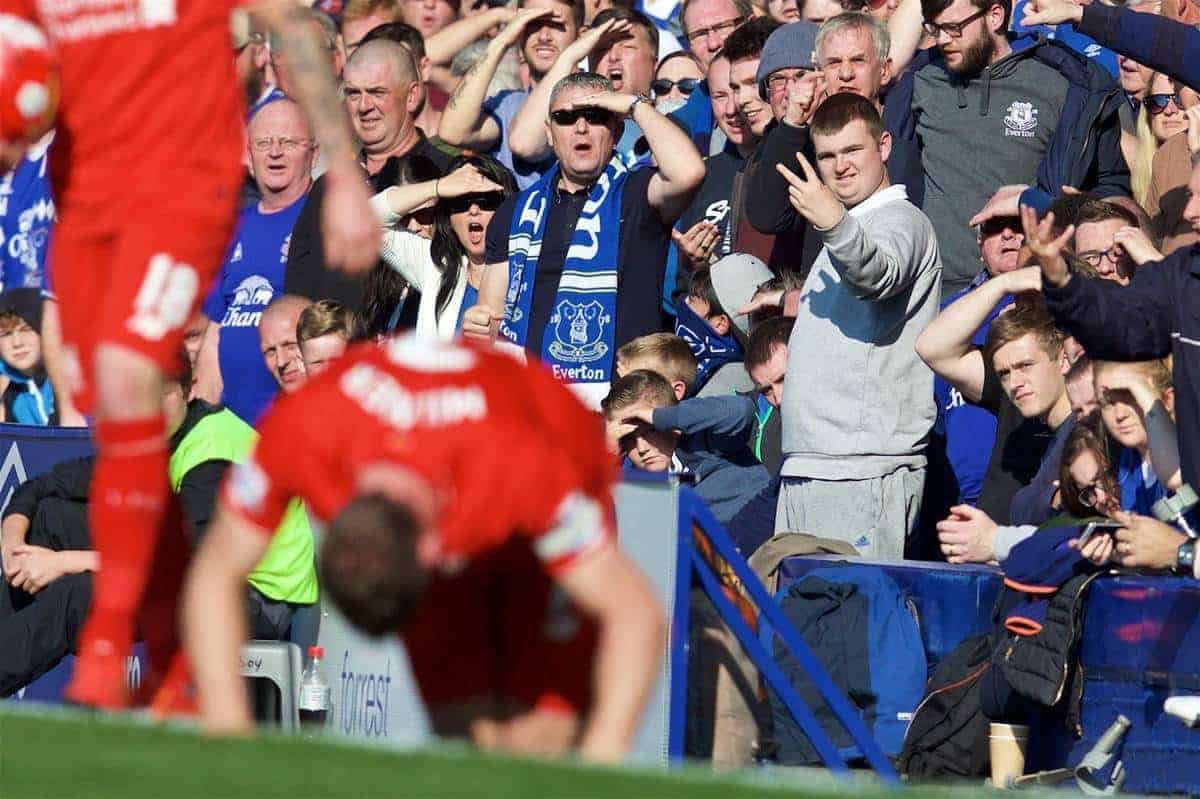 A point apiece was a fair outcome at Goodison Park, as Brendan Rodgers drew his sixth game with Everton in seven attempts during his time at Anfield.

Danny Ings gave the visitors the lead with a free header just before half-time, but Romelu Lukaku equalised seconds before the break.

The second-half was full of fiery moments but lacked match-winning quality, and Everton may well see it as a chance missed against a Reds side low on confidence.

Here are five talking points from the game:

Key players fail to turn up

Derbies can often be decided by moments of magic from big players, but several of Liverpool’s most high-profile names failed to make an impact on proceedings.

Buoyed by his double against Aston Villa last weekend, many saw Daniel Sturridge as the key man in the contest, but he was virtually non-existent except for an early shot that trickled wide.

The Englishman is clearly still a long way from full match sharpness, but his general demeanour was a little off from start to finish.

Philippe Coutinho was also bitterly disappointing throughout, failing to open up the Toffees’ defence and lacking his usual spark.

James Milner had a pass success rate of just 52.8% against Everton

The Brazilian’s form has not actually been that consistent so far this season, and Liverpool need him back to his magical best as soon as possible.

James Milner was another who had an extremely poor day at the office, completing just over half of his passes and failing to support Sturridge and Danny Ings in attack.

The 29-year-old was seen as Liverpool’s shrewdest signing of the summer, but in recent weeks his form has simply not been good enough.

Simon Mignolet may not be the most universally popular goalkeeper in Liverpool’s history, but he was the difference between the Reds winning and losing on Sunday.

The 27-year-old made a number of terrific stops, and his use of the ball and overall presence was much improved than of late.

World class save from Simon Mignolet.pic.twitter.com/6MTu84O0Oc

His save to deny Steven Naismith was both world-class and one of the best of the season so far, and his stop to deny James McCarthy wasn’t too shabby either.

Whether Mignolet is the long-term answer in goal will always be up for debate, but the Belgian showed how outstanding he can be at Goodison.

Liverpool have suddenly become draw specialists in 2015/16, and once again the players left the pitch having picked up a point.

Sunday’s draw was their sixth in just 11 matches this season, but while a point can sometimes feel like a positive, the recent ones have left you feeling a little flat.

The most alarming thing is the way in which the Reds are responding to being pegged back, with a lack of invention and belief clear to see.

AUTOTWEET: Liverpool draw 1-1 with their opponents after conceding the early lead.

Rodgers’ men have taken the lead in their last six games in all competitions, yet have only won one of those inside 90 minutes. That is a huge concern.

Lukaku’s equaliser was a gift from Emre Can, at a point in the game where holding the lead was vital, and that rather cheap equaliser can be added to similar goals conceded against FC Sion, Carlisle, Norwich City and Bordeaux.

The battle of the two midfields was always going to be important, and in truth, Everton won hands down. Fortunately, it didn’t prove fatal in the end.

Rodgers once again deployed a 3-4-1-2 formation, with Lucas Leiva and Milner the central midfield pairing and Coutinho ahead of them, but they just didn’t impose themselves on the game.

Lucas did ok but the partnership with Milner in CM is abysmal. No dynamism at all & not linking defence to attack.

Unfortunately, we have once again reached that time when the Premier League makes way for the boredom of an international break.

It is 13 days until Liverpool play their next match, away to Tottenham on 17th October, but questions will continue to be asked of Rodgers during that time.

There are some who are claiming Rodgers has now managed his last game for the club, with FSG on the brink of sacking the Ulsterman after a little over three years in the job.

Brendan Rodgers’ #LFC away record vs top 4 and Everton:

Sunday’s performance once again looked as though Rodgers has taken the Reds as far as he can, with the second-half display worrying in the extreme.

The 42-year-old is a good man and a talented coach, but if Liverpool are to kick on and reach the top four this season, a change in the Anfield hot-seat is needed.