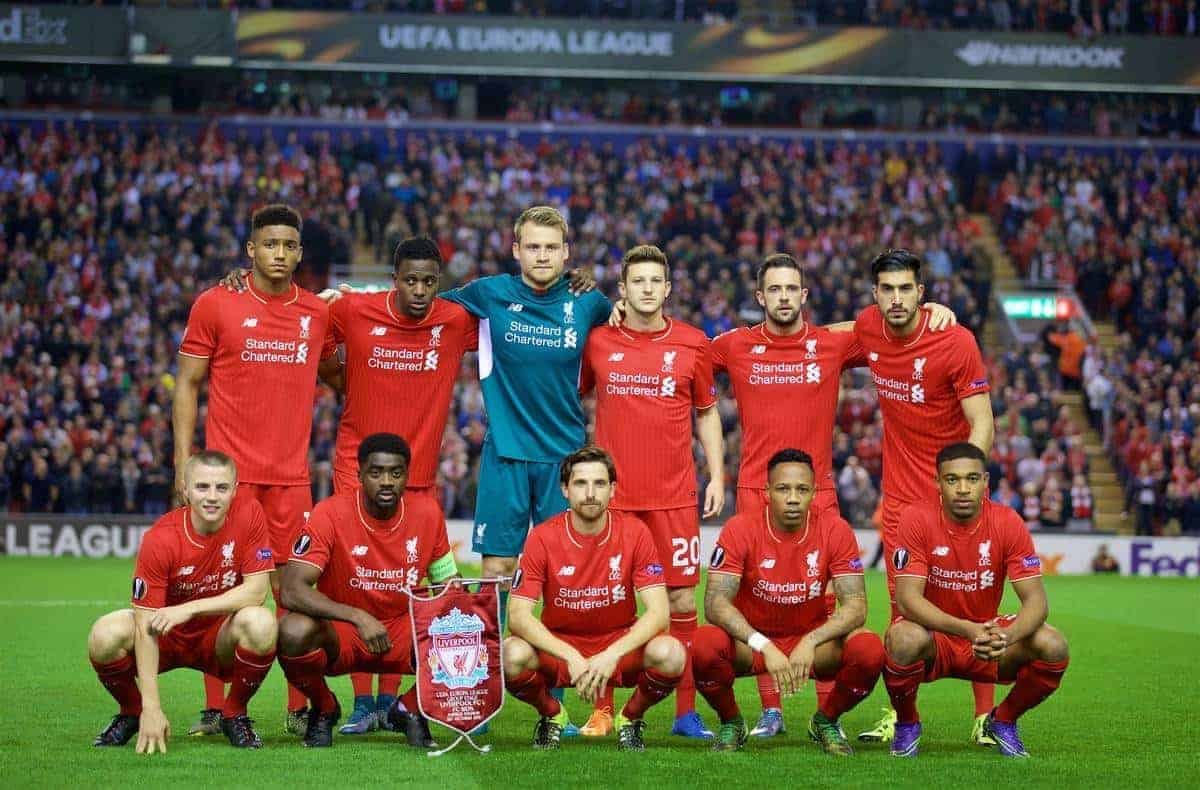 Liverpool were held to a 1-1 draw at home to Swiss side FC Sion on Thursday night. Here are our player ratings from this Europa League clash. Another unassured display from Liverpool’s first-choice goalkeeper, who could have done a lot better for Ebenezer Assifuah’s 18th-minute equaliser.

Mignolet is seemingly low on confidence, as evidenced by his choice to punch the ball away from danger rather than catch it—however, the Belgian at least kept it simple in possession, completing 100 percent of his passes.

Can is enduring a troubled period within Rodgers’ starting lineup, with his versatility seriously hampering his influence—and another restrained performance at centre-back at Anfield underlines this.

The German’s brightest spell came when he was utilised as a libero in the centre of Liverpool’s back three, but that lasted just 21 minutes.

Toure did little wrong in his 76 minutes on the field—recycling possession neatly and even hitting the crossbar with an opportunistic overhead kick.

But the Ivorian, serving as captain for the night, failed to instil calm and composure amongst an erratic defensive line.

At fault for Assifuah’s goal—Gomez was out of position after stepping out of defence—but this represented a blip in what was otherwise a reasonably assured performance.

Gomez was strong in the tackle and confident in possession, but his lack of chemistry alongside Toure and Can really cost Liverpool.

Like Can and Gomez, Clyne was fielded in an unsuitable role as Reds’ right wing-back, and this—combined with a lack of rest—saw the 24-year-old produce his worst performance in a Liverpool shirt to date.

Clyne’s poor performance was compounded by his sloppiness in possession, with the former Southampton man completing just 66.7 percent of his attempted passes—the joint-least of any Liverpool player.

It was a decidedly hit-and-miss performance from Allen, who is clearly still readjusting to first-team football after a spell on the sidelines with injury.

Like Clyne, Allen was poor in keeping possession, but when the Welshman was on the ball he managed to create some promising chances for the Reds—including a perfectly weighted through ball for Divock Origi in the second half.

Like his fellow academy product Jon Flanagan, Rossiter is unlikely to assume the role of Liverpool’s next local hero, but the 18-year-old looks very much at home in Rodgers midfield.

Operating in the Lucas Leiva role in Liverpool’s midfield two, Rossiter broke up play well—making more tackles (3) and interceptions (5) combined (8) than any other player—as well as moving the ball comfortably in midfield, completing 89.9 percent of his attempted passes.

Did Rodgers make the right decision loaning Lazar Markovic to Fenerbahce and putting his faith in Ibe?

This was more standard fare from the 19-year-old: all power, pace and trickery, but with no end product or tactical intelligence. There is much work to be done before the former Wycombe Wanderers star is first-team ready, and Rodgers may now be coming to terms with this.

Liverpool’s goalscorer and their most dangerous attacking player on the night, Lallana looked at ease in his natural No. 10 role.

The £25 million man took his goal well, and made the joint-most key passes (3) of any player—but should have converted his second-half opportunity to seal victory for the Reds.

Origi played an interesting role in Liverpool’s two-man attack, and the Belgian’s performance was one of few positives to take from this deflating stalemate.

Drifting into wide areas off the ball, Origi was able to utilise his pace and power to penetrate the Sion defence—but the 20-year-old squandered too many chances to put Liverpool ahead.

A quiet night for Ings, who looked to have sustained a knock before his second-half withdrawal.

The striker’s defining moment came when he failed to get on the end of a sumptuous cross from Lallana in the first half.

Alberto Moreno (on for Clyne, 46′) – 6 – The Spaniard’s delivery from the left flank is an invaluable weapon in Liverpool’s arsenal, with Moreno making three key passes in his 45 minutes on the field.

Philippe Coutinho (on for Ings, 61′) – 5 – Coutinho was not able to influence the game from the substitutes’ bench, with his delivery lacking in the final third.

Mamadou Sakho (on for Toure, 76′) – 5 – Sakho did little wrong in his 15 minutes on the field—it is disappointing that he and his fellow substitutes were required, with Sunday’s Merseyside derby looming.

Failure to defeat another lowly European opposition has mounted even more pressure on Rodgers in his position as Liverpool manager, and failure to intervene from the touchline sees a large portion of the blame fall at the Ulsterman’s door.

The constant shifting of personnel within the back three serves as a salient example of his many tactical oversights at Anfield on Thursday night.

Speaking after the game, Rodgers described this season as another “rebuilding job,” but Liverpool owners Fenway Sports Group must now be seriously considering whether this should be with another manager at the helm.