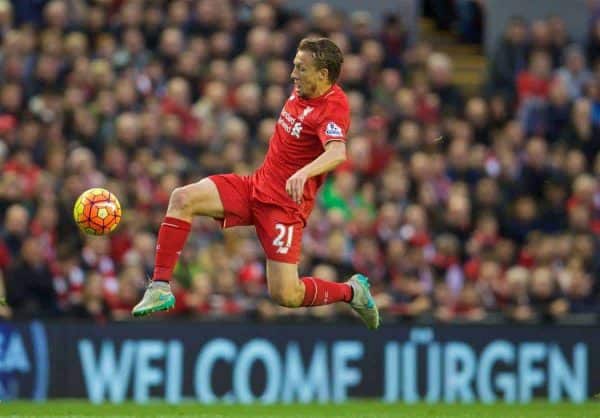 One of many players thriving under new Liverpool manager Jurgen Klopp, Lucas Leiva was the Reds’ star man in Sunday’s 1-1 draw with Southampton.

Throughout Brendan Rodgers’ spell in charge of Liverpool, Lucas was an unappreciated peripheral figure, often battling back from the brink when the Ulsterman required a defensive-minded body in the midfield.

Under Klopp however, Lucas is emerging as a key figure, and this continued in Sunday’s 1-1 draw with Southampton at Anfield.

Goals from Christian Benteke and Sadio Mane ensured a share of the spoils for both sides, with the Saints’ defence earning much of the plaudits on the afternoon.

But, along with the powerful Benteke, Lucas was most deserving of praise from the Kop on Klopp’s first home Premier League outing.

With Klopp sticking with a variation of a 4-3-2-1 for each of his three games in charge at Liverpool so far, Lucas continued the role he had played in draws with both Tottenham Hotspur and Rubin Kazan previously.

Alongside Emre Can and James Milner, Lucas formed a three-man midfield engine tasked with pressing, harrying and suffocating space in the central areas.

With Can and Milner fanning out onto the flanks in possession, overlapping Adam Lallana and Philippe Coutinho into the penalty area, Lucas was once again stationed as Liverpool’s most central midfielder.

However, rather than operate as a limited defensive midfielder such as in his first appearance of the season away to Arsenal, dropping back between the centre-backs, Klopp has clearly instructed the Brazilian to perform a more dynamic midfield role.

When Liverpool were in possession at Anfield, Lucas push forward into an advanced position on the edge of the final third, with Milner, Can, Lallana, Coutinho, Divock Origi, Nathaniel Clyne and Alberto Moreno all working to penetrate the Southampton penalty area.

This allowed the Reds to remain on the front foot as they applied pressure in the opening stages, with Lucas serving as an immediate line of defence, maintaining attacking momentum.

However, as Ronald Koeman lined his side up with a compact defensive line, with a back four of Cedric Soares, Virgil van Dijk, Jose Fonte and Ryan Bertrand shielded by a midfield double pivot of Victor Wanyama and Jordy Clasie, Liverpool struggled to break through with any frequency.

This saw Lucas operate as Liverpool’s deep-lying playmaker, as Klopp stressed a patient approach in the buildup.

“Lucas? You don’t think he can play balls on the right and left side? He can,” Klopp told reporters after following the 0-0 draw away to Spurs, with this belief was vindicated by Lucas’ strong passing play in the Southampton half.

The 28-year-old continually swept passes to the flanks, keeping his head up, looking to an opening in the attacking sector.

Only Moreno (29) played more forward passes in the final third than Lucas (21).

However, Lucas is unlikely to be Liverpool’s primary playmaker under Klopp, with his strengths remaining in the defensive sector—and he balanced his duties well in his advanced role.

While Milner and Clyne typically interchanged as Liverpool’s right-sided attacker, when both pushed forward to overwhelm Bertrand in attack, Lucas was diligent in tracking back to cover the dangerous Mane.

This allowed Liverpool to thwart many counter-attacking opportunities for the Saints, with Lucas making three successful tackles in the opposition’s half.

However, as to be expected, Liverpool did not play out the entire contest on the front foot, and it was when Southampton gained a foothold that Lucas’ strengths were truly tested.

Under Rafa Benitez, Lucas was one of the most effective defensive midfielders in the Premier League, and it is a testament to his quality that he has averaged the most successful tackles per 90 minutes (6.3) of any player in this season’s competition.

Therefore, while Lucas’ added responsibilities under Klopp were key in Sunday’s stalemate, and will continue to be, it was his defensive work that was most important.

Interestingly, much of this came in covering Liverpool’s swashbuckling full-backs, with Clyne and Moreno both taking up advanced positions for much of the clash, looking to overload the wide areas.

In the opening stages, Lucas combined with both Clyne and Moreno to quell the threat of Southampton‘s wingers, with his tete-a-tete with Mane particularly enthralling.

Lucas was clearly instructed to suffocate the Senegalese throughout, and this was largely successful: Mane made no key passes, and completed just one dribble.

This was, of course, a collective effort, with Liverpool looking to swarm around Southampton when not in possession—four or five bodies around the ball throughout.

There are clear signs that Klopp’s high-intensity pressing game is developing within the Liverpool squad, with Lucas’ work in tandem with a much-improved Martin Skrtel on Sunday a major progression from the draws with Spurs and Kazan.

Skrtel could be found stepping out of defence with confidence, looking to intercept play before Southampton could build threatening attacking moves, and Lucas was typically there to cover.

Perhaps most surprising are the energy levels that Lucas seems to be finding under Klopp—as if the change in management has breathed new life into the midfielder—and the Brazilian was flying into tackles and making important interceptions right up to the final whistle.

This bodes well for Klopp as he continues to implement his philosophy at Liverpool, and suggests that Lucas could make this role his own for the long term.

Not alien to a redemption act, Lucas may be pulling off his most impressive feat yet this season.

Can Lucas Make the Role His Own Under Klopp?

With Besiktas looking set to secure a deal to sign Lucas on a season-long loan at the end of the summer transfer window, the midfielder’s departure seemed like a rational course of action.

Under Rodgers, Lucas looked like a spent force; limited and sluggish.

But now, three games into Klopp’s tenure, his vitality is restored, and Lucas is threatening to become an invaluable option for the Reds once more.

Pairing defensive might with a canny creative ability in his dynamic midfield role, Lucas looks capable of providing Klopp with a solid base to build from in the engine room.

Crucially, Lucas is playing with a vibrancy once again—with his willingness to atone for the few mistakes made at Anfield on Sunday underlining this.

When he committed an unnecessary foul on Mane on the edge of the Southampton penalty area on 20 minutes, gifting Koeman’s side possession, he was quickly back alongside Moreno to quell the resulting attacking move.

When he felled Mane once again on 38 minutes, Lucas was the player who finally got rid of the ball from Southampton‘s ensuing set-piece attacks, with the menacing Van Dijk looming.

After fouling Mane again on 57 minutes, Lucas made sure he was back to make it right by blocking Bertrand’s run as he looked to cut inside and drive towards the Liverpool penalty area two minutes later.

Lucas looks to have been revitalised by Klopp’s arrival, along with many others including Moreno, Can and Lallana, and the Brazilian may well have worked his way into the 48-year-old’s long-term thinking with strong displays such as against Southampton.

At Borussia Dortmund, Klopp founded his midfield on a solid defensive base, with either of Sven Bender or Sebastian Kehl operating alongside a more progressive, box-to-box option.

This suggests that Lucas will have a future under Klopp’s stewardship, but Liverpool would still be wise to add another option in this area.

The Saints’ pivot of Wanyama and Clasie, for example, was an intriguing prospect, with Wanyama’s steel matching that of Lucas, but the Dutchman’s energy and tenacity highlighting the specification of midfielder Klopp should add to swell his defensive-midfield ranks.

For now, however, Lucas has proved he is capable of thriving in Klopp’s demanding system, and it is a joy to watch.