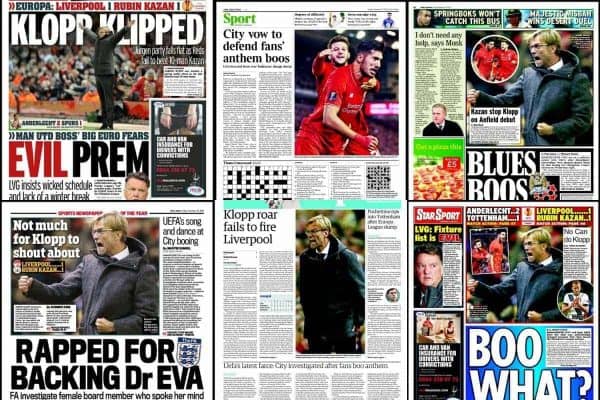 Following Liverpool’s 1-1 draw at home to Rubin Kazan on Thursday, we round up how the morning newspapers assessed the Europa League clash.

It certainly wasn’t a match that will live long in the memory, and Liverpool’s failure to kick on following a first-half red card for their opponents was alarming.

Marko Devic’s opener was cancelled out by Emre Can‘s close-range finish, but there was a lethargy about Liverpool’s all-round display.

Anfield tried its best to gee up the Reds players on Jurgen Klopp‘s big night, but they let down their manager and the fans on a frustrating evening on Merseyside.

Here is how the morning newspapers reacted to proceedings.

The Liverpool Echo‘s James Pearce felt that, despite the lack of quality, the performance was still a far cry from the one against FC Sion under Brendan Rodgers:

“If the last home game of Brendan Rodgers’ reign provided tangible proof for supporters that change was urgently required, the visit of Russian outfit Kazan at least gave them hope for the future under Jurgen Klopp.

“There was no barnstorming home bow for the new manager as the Reds endured a desperately frustrating night in front of watching owners John W Henry, Tom Werner and Mike Gordon. But this was a world away from the lifeless and disjointed display against Sion.

“The commitment levels couldn’t be questioned as the Reds threw everything at 10-man Kazan in search of a winner.”

Chris Bascombe of the Telegraph bemoaned Liverpool’s lack of a top-class striker on the night, with Divock Origi flattering to deceive:

“Whether the philosophy if tiki-taka, gegenpressing or the Big Sam long hoof, you’re never going to achieve much without a finisher. It’s been the problem at Anfield since Luis Suarez’s sale, and when Christian Benteke was summoned with just under 30 minutes to go it was another reminder – as if more is needed – as to where the problems lie in this side.

“The solution probably still rests with the absent Daniel Sturridge and whether he can ever get himself fit. Divock Origi has some talent, but he does not look like a centre-forward and it must have worried the new manager how much his side toiled considering they were playing so long against ten men.

“Despite dominating possession, there were echoes of recent games against Carlisle and Sion with Liverpool unable to create clear chances.”

Martin Samuel of the Mail believes this is a Reds side clearly lacking in quality, with Klopp no overnight miracle worker:

“It always helps for a manager to get an early sight of what he faces at his new club. The culture, the strengths, the fixes, the flaws. It’s fair to say his Anfield unveiling gave Jurgen Klopp a most thorough briefing on what ails Liverpool.

“The matchday programme, with his cover image parodying the iconic Barack Obama ‘Hope’ poster, neatly encapsulated the enormous expectation. Yet Liverpool’s failure to overcome a Rubin Kazan team reduced to 10 men after 36 minutes confirmed the size of the task ahead.

“No matter Klopp’s stardust, this remains a side who have lost their manager, their best players and their status of 18 months past, and as a consequence lack conviction. Liverpool had more than 30 shots at goal, but 80 per cent were off target.

“For this to be an Obama moment for Liverpool, however, better has to come. As the game fizzled out, Klopp stood, hands deep in the pockets of his sharp new outerwear. If only the team looked as good as he did.”

“Obligatory summary of the intensity of pressing under Klopp? Go on then.

“Five days after their energetic start against Tottenham, Liverpool again spent the early stages here hassling and closing their opponents with relentless energy. It was most notable in the few seconds after they lost the ball – that famed gegenpressing – which at times seemed to rattle Rubin.

“But there were problems. When the midfield was breached, the defence looked exposed. Then there were individual errors, like Nathaniel Clyne‘s lapse in concentration ahead of the opening goal. Joe Allen, too, looked a touch off the pace and was hooked at the break.

“A better side than Rubin would have meted out further punishment.”

“Sakho – Another assured performance from the fan favourite, whose every touch was cheered by the crowd in the second half. While Liverpool weren’t tested much on the counter attack after the visitors were reduced to 10 men, any semblance of a break was usually snuffed out by Sakho.

“Milner – For someone who has played most of his career out wide, he has not looked especially settled since Klopp moved him over to the right. His work off the ball remains admirable, and at times he linked up well with Clyne and Lallana, but he’s not in his best form right now and his set pieces continue to frustrate.

“Coutinho – Another disappointing display from the out-of-sync Brazilian. It’s just not happening for him, and he’s visibly becoming increasingly frustrated with himself. At one point, he beat the turf with his fists after once again losing possession cheaply. Replaced after an hour and can have no complaints.”