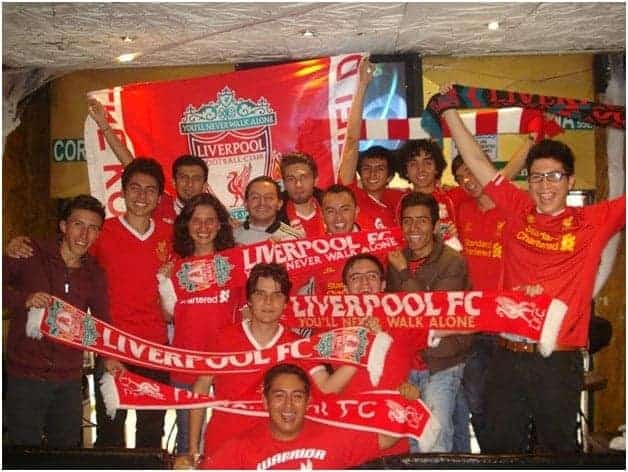 Much has been said about the “out of towners” going to Anfield, but what about those of us who due to different reasons are not able to travel to Liverpool, England, or even Europe?

I can only speak according to my experience. I have been a Liverpool fan for several years now and have enjoyed (and suffered) almost every match far away from the team.

I have lived my whole life in Colombia (yes, where the likes of Valderrama, Rincon, James and Falcao were born) and unfortunately I haven’t had the chance of traveling. But being far from Anfield is no reason to not support or love the club, you can ask Red fans in Australia, USA and many more here in South America where football is still a popular sport and fans are so passionate. Watching a game all by your own is not as enjoyable as being with fellow supporters. For quite a long time I sat in my room and watched the Reds alone and it was hard to find people who liked or even knew about Liverpool.

Time passed and thanks to social media I started to meet Reds all around Colombia, Argentina, Chile, Uruguay, Mexico and many other countries not even close to where I live.

Eventually we created a very solid – yet not so large – group of LFC supporters in Colombia and started to make events and meetings to watch the matches in different cities.

It has not been easy, especially due to the time difference – some games started as early as 6am and even worse in pre-season – but it sure has been great. After the match we usually keep talking about the game, LFC and good old memories as we enjoy a pint or two.

Liverpool merchandise is very hard to find here, Warrior kits were not available in our country so we had to buy directly from the official online store. New Balance recently brought the kits to sell but items like scarves and clothes in general are nearly impossible to find.

Some have had the great opportunity of going to Liverpool and watch the Reds, the rest of us is still dreaming and working hard to go one day and sing and support the Reds in such a mythical and emblematic stadium as Anfield is.

SEE ALSO: A Red in America – Following Liverpool in the USA

Do you watch Liverpool from afar? Are your experiences similar to David? Let us know in the comments below.