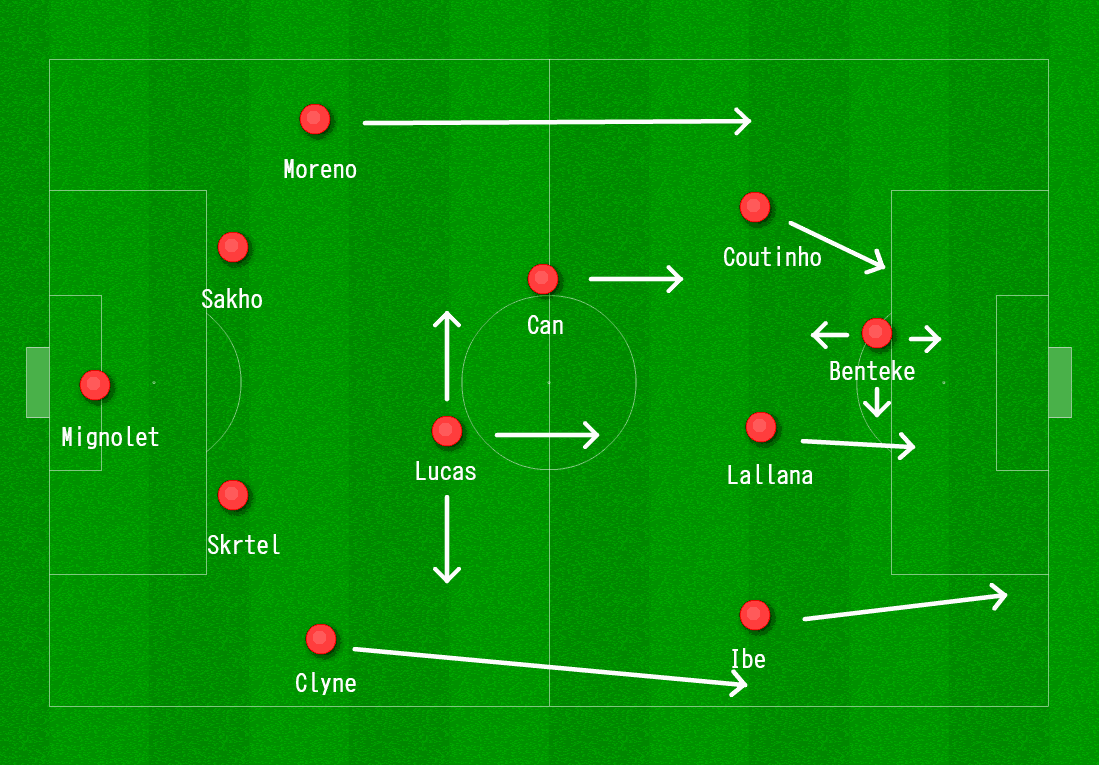 Jurgen Klopp was forced to vary his attacking approach as Liverpool struggled to overcome Crystal Palace in Sunday’s 2-1 defeat at Anfield.

With James Milner injured and Roberto Firmino rested, Klopp made some tactical changes to his usual starting lineup, with Jordon Ibe replacing Milner.

Ibe took up a right-sided attacking role, alongside Philippe Coutinho on the left and Adam Lallana in the No. 10 role in a 4-2-3-1.

With Coutinho dictating from a deeper position cutting in on his right foot, Ibe ploughed the right touchline, adding width alongside the rampaging Nathaniel Clyne.

This allowed Lallana to swarm around Benteke, with the No. 9 serving as a pivoting target man.

However, while Liverpool dominating in possession, Klopp’s side were regularly punished on the break, and with the scores level at 1-1 on 65 minutes, the German made a significant change.

Bringing Firmino on for the ineffective Emre Can, Klopp altered his formation, with Liverpool now operating in a 4-1-4-1 setup.

This saw both Firmino and Lallana overlapping in central areas as Benteke provided an aerial outlet and dropped deep to influence play—though his performance was decidedly meagre overall.

Firmino’s introduction saw Coutinho move wider, taking up a similar position to that of Ibe.

Liverpool created six chances in the final 25 minutes, compared to 13 in the previous 65, underlining the benefits of Klopp’s positive change.

However, this did not provide any relief when Scott Dann powered home the winner from Yohan Cabaye’s corner, with Palace leaving Merseyside 2-1 winners.

Klopp’s Liverpool now head into the international break deflated, after suffering the first defeat of the German’s reign.

But the Liverpool manager may well have revealed a bold tactical outlook that could prove positive in the future.