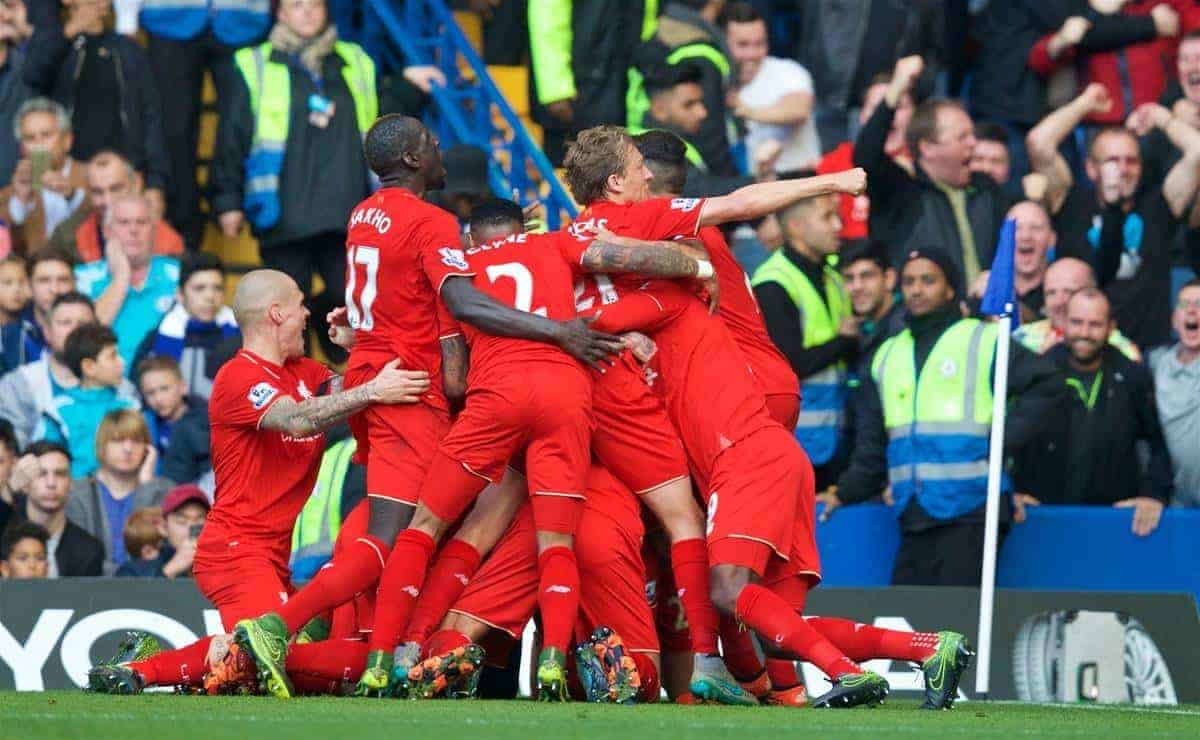 Liverpool finished October in style with a resounding 3-1 win at Chelsea on Saturday, but who have been the Reds’ three best players this month?

October 2015 will always be remembered for being the month Brendan Rodgers was sacked and Jurgen Klopp was appointed Liverpool manager.

Rodgers had become increasingly under-fire in September, and relatively insipid 1-1 draws against FC Sion and Everton to start October proved to be the final straw.

Klopp’s arrival was met with unbridled joy by Reds supporters across the globe, and the 48-year-old remains unbeaten in his first five games in charge.

Draws against Tottenham, Rubin Kazan and Southampton were not exactly earth-shattering, but improvements were certainly noticeable within the team.

A League Cup win at home to Bournemouth and the aforementioned drubbing of Chelsea were extremely encouraging, and the future looks bright under the hugely popular German.

The question is: which Liverpool players have shone most over the last month? Having been completely out of favour under Rodgers at the start of this season, Alberto Moreno roared back into form in October, having initially come in to the side as a wing-back in late September.

Many fans believed the 23-year-old would thrive more than most working with Klopp, and that is exactly the way things have started.

Moreno hasn’t done anything spectacular from his left-back role, but there has been far more purpose to his game than at any other time in his Liverpool career to date.

His pace and attack-minded style have given the Reds a constant outlet down the left, and his ability to press and keep going for 90 minutes has been commendable.

Defensively, there has also been a definite improvement from the Spaniard, even if he didn’t cover himself in glory for Ramires’ goal for Chelsea on Saturday. A brilliant last-ditch tackle on Southampton‘s Sadio Mane stands out.

Moreno is an infectious character, and his gung-ho approach to football perfectly illustrates what Klopp is all about as a manager.

The ex-Sevilla man is not perfect, and still has improving to do, but he has been much better over these past four weeks.

It has certainly been an unpredictable eight years for Lucas Leiva on Merseyside, with constant rumours surrounding his future, and fluctuations in both popularity and form.

The Brazilian was brilliant in October, and if there is one thing that has become abundantly clear in the last month, it’s just how much he loves Liverpool Football Club.

A commanding display in the Merseyside derby was followed by a terrific performance at Spurs in Klopp’s first game, and he was widely seen as the Reds’ star man in the draw with Southampton.

Lucas Leiva has made more tackles than any other player in the Premier League so far this season (opta)https://t.co/M3CktFcqby

It was against Chelsea on Saturday that Lucas was really exceptional, however, with the 28-year-old a colossus in the middle of the park.

His underrated poise in possession was terrific, he worked endlessly for the good of the team and his overall influence was enormous. It has been much of the same throughout October.

There were some who, perhaps understandably, felt Lucas’ lack of pace and legs would be problematic in Klopp’s system, but he is one of the first names on the team-sheet at the moment.

If there was one thing that was completely inexcusable during the end of Rodgers’ tenure, it was his decision not to pick Mamadou Sakho week in, week out.

It was abundantly clear that the 25-year-old is Liverpool’s best defender, and he has backed up these claims with a magnificent return to the side.

The France international was one of his team’s best players in virtually every game in October, with his superb use of the ball and all-round defensive dominance standing out.

Sakho's distribution yesterday was world class, made the most passes on the pitch too (76 – 92% accuracy) always looked to pass forward

The 0-0 draw at Spurs was Sakho’s finest performance of the month, with his flawless display continuing to make many of those who bizarrely didn’t rate him change their opinion.

In his four Premier League appearances in October, he enjoyed a pass completion rate of 91 per cent, and won a fairly remarkable 71 of per cent of his duels.

The former Paris Saint-Germain defender has huge character both on and off the pitch, and his brilliant salute towards the Kop following the Rubin Kazan game further endeared him to the supporters.

Sakho is now a massively important figure at Anfield, with his consistency, quality and leadership making him arguably Liverpool’s most popular player right now.

The German has been used in his preferred central midfield role, and his dynamic box-to-box style has complemented Lucas’ game nicely.

Despite October being injury-plagued for the 24-year-old, he has still made a big impact.

His brilliant header gave Liverpool the lead against Southampton, while his second-half cameo against Chelsea, which included scoring the Reds’ third goal, helped his side defeat Chelsea.

The Belgian doesn’t always receive the credit he deserves, and he enjoyed a very consistent month, with no errors of note.

Made two terrific saves to help earn Liverpool a point at Spurs, and expertly denied Oscar against Chelsea.